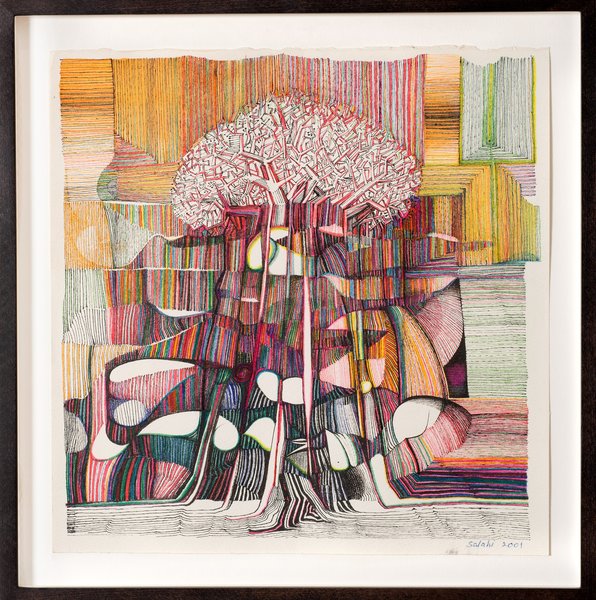 Obed is celebrated as ‘a restorer of life and a nourisher’ of Naomi’s old age (Ruth 4:15 NRSV). The genealogy listing his son and grandson as Jesse and David (4:22) and the connecting of Ruth with Rachel and Leah (4:11) reveal Obed’s importance in the renewal and sustenance of Israel. Ruth is the great-grandmother of the renowned King David, and through him, for Christians, an ancestor of Jesus the Messiah.

More immediately in the narrative, Ruth also bears smaller gifts to those around her. She offers Naomi six measures of barley given to her by Boaz. Ruth is a life-bringer, hope-bringer, and God-bearer. She nurtures and revivifies individuals, community, and the whole people of God.

Trees are often imbued in religious and indigenous traditions with sacred meaning—frequently symbolizing life and growth. They are one of a number of significant motifs that recur in the work of Ibrahim El Salahi. El Salahi uses the ‘abstracted motif of the tree … as a metaphorical link between heaven and earth, creator and created’ (Fritsch 2018: 10). A Muslim Sudanese refugee living in Oxford, he combines European forms and Sudanese themes. His work has variously been described as transnational surrealism and African or Arab modernism. He has a particular interest in the haraz tree, depicted here in The Oxford Tree. An acacia indigenous to Sudan that grows in the Nile valley, El Salahi sees it as ‘a symbol of the Sudanese and their resilience’. The haraz is bare in rainy season when everything else is green. It blooms during the dry season when all else is stripped. It is ‘a very obstinate tree, just like the Sudanese’. Finding the tree within as well as outside himself, he notices it ‘trying to assert itself’ (Fritsch 2018: 24, 55).

Ruth asserts herself both by her entry into and after her arrival in Israel. In doing so, she blooms at a time when the community of Israel is struggling and dry. One possible Hebrew root of her name is rwh, meaning to water to saturation (Donaldson 2010: 146).

3 Then Naʹomi her mother-in-law said to her, “My daughter, should I not seek a home for you, that it may be well with you? 2Now is not Boʹaz our kinsman, with whose maidens you were? See, he is winnowing barley tonight at the threshing floor. 3Wash therefore and anoint yourself, and put on your best clothes and go down to the threshing floor; but do not make yourself known to the man until he has finished eating and drinking. 4But when he lies down, observe the place where he lies; then, go and uncover his feet and lie down; and he will tell you what to do.” 5And she replied, “All that you say I will do.”

6 So she went down to the threshing floor and did just as her mother-in-law had told her. 7And when Boʹaz had eaten and drunk, and his heart was merry, he went to lie down at the end of the heap of grain. Then she came softly, and uncovered his feet, and lay down. 8At midnight the man was startled, and turned over, and behold, a woman lay at his feet! 9He said, “Who are you?” And she answered, “I am Ruth, your maidservant; spread your skirt over your maidservant, for you are next of kin.” 10And he said, “May you be blessed by the Lord, my daughter; you have made this last kindness greater than the first, in that you have not gone after young men, whether poor or rich. 11And now, my daughter, do not fear, I will do for you all that you ask, for all my fellow townsmen know that you are a woman of worth. 12And now it is true that I am a near kinsman, yet there is a kinsman nearer than I. 13Remain this night, and in the morning, if he will do the part of the next of kin for you, well; let him do it; but if he is not willing to do the part of the next of kin for you, then, as the Lord lives, I will do the part of the next of kin for you. Lie down until the morning.”

14 So she lay at his feet until the morning, but arose before one could recognize another; and he said, “Let it not be known that the woman came to the threshing floor.” 15And he said, “Bring the mantle you are wearing and hold it out.” So she held it, and he measured out six measures of barley, and laid it upon her; then she went into the city. 16And when she came to her mother-in-law, she said, “How did you fare, my daughter?” Then she told her all that the man had done for her, 17saying, “These six measures of barley he gave to me, for he said, ‘You must not go back empty-handed to your mother-in-law.’ ” 18She replied, “Wait, my daughter, until you learn how the matter turns out, for the man will not rest, but will settle the matter today.”

4 And Boʹaz went up to the gate and sat down there; and behold, the next of kin, of whom Boʹaz had spoken, came by. So Boʹaz said, “Turn aside, friend; sit down here”; and he turned aside and sat down. 2And he took ten men of the elders of the city, and said, “Sit down here”; so they sat down. 3Then he said to the next of kin, “Naʹomi, who has come back from the country of Moab, is selling the parcel of land which belonged to our kinsman Elimʹelech. 4So I thought I would tell you of it, and say, Buy it in the presence of those sitting here, and in the presence of the elders of my people. If you will redeem it, redeem it; but if you will not, tell me, that I may know, for there is no one besides you to redeem it, and I come after you.” And he said, “I will redeem it.” 5Then Boʹaz said, “The day you buy the field from the hand of Naʹomi, you are also buying Ruth the Moabitess, the widow of the dead, in order to restore the name of the dead to his inheritance.” 6Then the next of kin said, “I cannot redeem it for myself, lest I impair my own inheritance. Take my right of redemption yourself, for I cannot redeem it.”

7 Now this was the custom in former times in Israel concerning redeeming and exchanging: to confirm a transaction, the one drew off his sandal and gave it to the other, and this was the manner of attesting in Israel. 8So when the next of kin said to Boʹaz, “Buy it for yourself,” he drew off his sandal. 9Then Boʹaz said to the elders and all the people, “You are witnesses this day that I have bought from the hand of Naʹomi all that belonged to Elimʹelech and all that belonged to Chilʹion and to Mahlon. 10Also Ruth the Moabitess, the widow of Mahlon, I have bought to be my wife, to perpetuate the name of the dead in his inheritance, that the name of the dead may not be cut off from among his brethren and from the gate of his native place; you are witnesses this day.” 11Then all the people who were at the gate, and the elders, said, “We are witnesses. May the Lord make the woman, who is coming into your house, like Rachel and Leah, who together built up the house of Israel. May you prosper in Ephʹrathah and be renowned in Bethlehem; 12and may your house be like the house of Perez, whom Tamar bore to Judah, because of the children that the Lord will give you by this young woman.”

13 So Boʹaz took Ruth and she became his wife; and he went in to her, and the Lord gave her conception, and she bore a son. 14Then the women said to Naʹomi, “Blessed be the Lord, who has not left you this day without next of kin; and may his name be renowned in Israel! 15He shall be to you a restorer of life and a nourisher of your old age; for your daughter-in-law who loves you, who is more to you than seven sons, has borne him.” 16Then Naʹomi took the child and laid him in her bosom, and became his nurse. 17And the women of the neighborhood gave him a name, saying, “A son has been born to Naʹomi.” They named him Obed; he was the father of Jesse, the father of David.

18 Now these are the descendants of Perez: Perez was the father of Hezron, 19Hezron of Ram, Ram of Amminʹadab, 20Amminʹadab of Nahshon, Nahshon of Salmon, 21Salmon of Boʹaz, Boʹaz of Obed, 22Obed of Jesse, and Jesse of David.