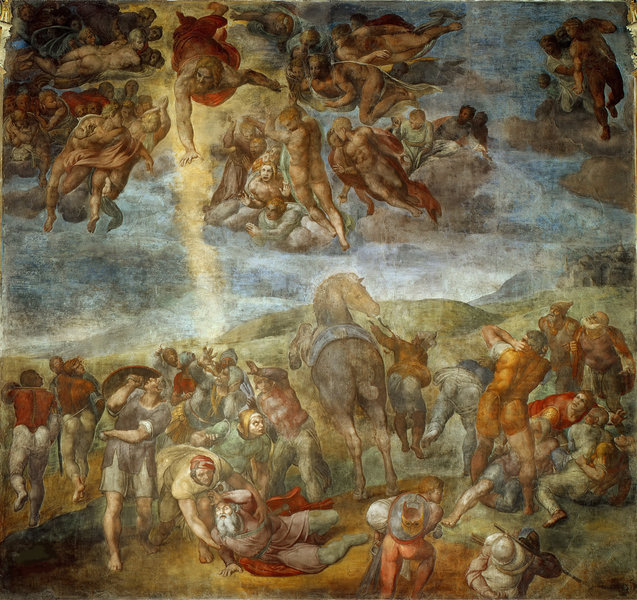 ‘The Least of the Apostles’

Michelangelo Buonarroti’s monumental fresco of Saul’s conversion (after which he uses the new name Paul), has often been maligned by art historians (see Steinberg 1975: 17–21, 32–37). The artist takes many of the medieval tradition’s established visual motifs, but then exaggerates and subverts them, before weaving them together in his own original composition.

Yet the fresco is in many ways an apposite rendering of the Acts conversion texts (Acts 9:1–19; 22:6–21; 26:12–18). Michelangelo successfully captures both the narrative energy of the Acts accounts, and the confusion they convey.

The medieval tradition generally presented Christ in bust form in a neat mandorla or cloud-like enclosure at the top of the scene. Here, by contrast, we see a dynamic, naturalistic Christ breaking through into the earthly realm, both bathed in and emanating heavenly light (see Acts 26:13: the light is ‘more blinding than the sun’). In a further break with earlier visual tradition, Christ is surrounded by a heavenly host of around thirty figures. They provide a compositional balance to the twenty-three travelling companions scattered below. The companions encompass all the reactions described in the three Acts accounts (hearing, being blinded by the light, falling).

The figure in the centre of the fresco grapples with Saul’s runaway horse, whereas prior visualizations had shown Saul in the very moment of being unhorsed. Saul himself lies prostrate and humbled in the centre foreground, literally the ‘lowest’ figure in the scene. He is an aged Saul (he was actually around thirty at the conversion) and has Michelangelo’s features. Michelangelo may be reflecting on his own humbled state in his later years, whereby he eschewed his former pride in his art in favour of a longing for divine regeneration through grace (Steinberg 1975: 39; Corley 1997: 8).

Saul’s closed eyes may suggest that he is spiritually elsewhere (with Christ?), and his vulnerable, stationary pose signals that he is subsumed by the experience. Thus, Michelangelo contrasts Saul’s calm moment of ‘ultimate revelation’ with the chaotic and uncomprehending reaction of the companions.

Corley, Bruce. 1997. ‘Interpreting Paul’s Conversion-Then and Now’, in The Road from Damascus: The Impact of Paul's Conversion on His Life, Thought, and Ministry, ed. by Richard Longnecker (Eerdmans), pp. 1–17