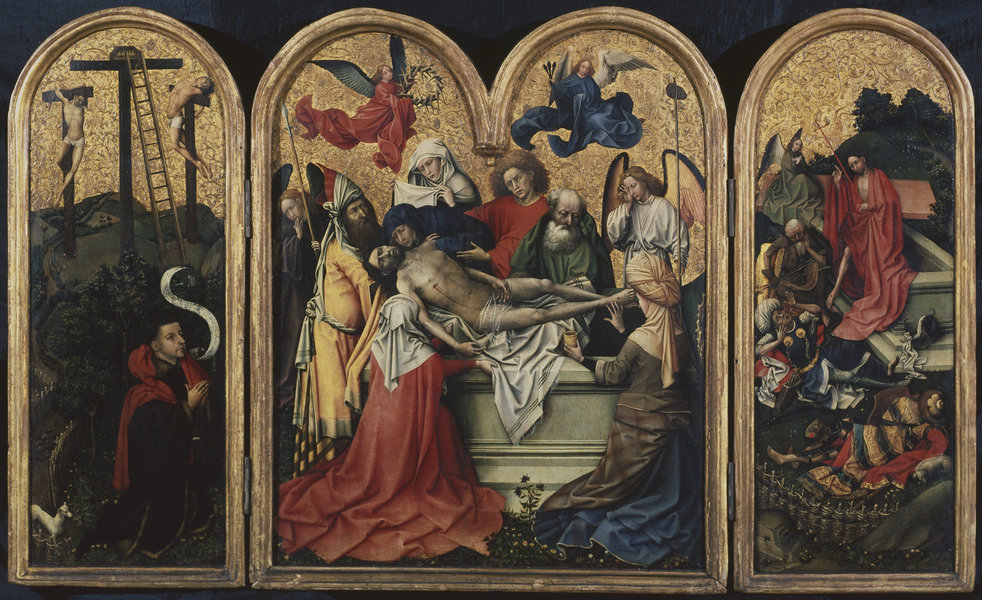 Painted in the Southern Netherlands, this small triptych was made as an aid to private devotion. On its left wing, an unidentified donor kneels at prayer before a hilly landscape, the intentionally blank scroll beside him a signifier of prayer. Behind him, the three crosses are prominently silhouetted against a gold background worked in a pattern of vine leaves. Christ’s cross is empty, but the thieves are still hanging, in poses that express their respective qualities: the Good Thief viewed frontally, with bowed head; the Bad Thief in a more contorted pose, as if writhing in agony.

In the central panel, the Entombment takes place, attended by the Virgin, St John, Nicodemus, Joseph of Arimathea, and the three Marys, with angels bearing the Instruments of the Passion: the spear, sponge, crown of thorns, and nails. On the right wing, the resurrected Christ steps out of the tomb, disturbing one of the three slumbering guards (their exotic, eastern-inspired dress signifying that they are Jews), with an angel seated on the tomb’s lid. Being asleep, the guards are ‘unseeing’ and hence ‘unaware’ of the miraculous event taking place, perhaps a reflection of contemporary attitudes to the ‘blindness’ of the Jews to the Christian faith.

The imagery can be read from left to right as the aftermath of the Passion narrative, focusing on its two key messages of Christ’s death and resurrection. The placement of the donor immediately adjacent to the Entombment, separated from it only by the frame, is significant: his prayers are focused on these events, just as they would have been when he was physically at prayer before the triptych. No less significant is the prominence given to the two thieves in the donor panel. Like him, they are mortal; like them, he has the choice between salvation and damnation, their presence a continual reminder of these choices. 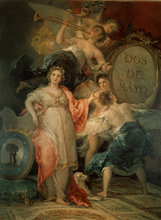 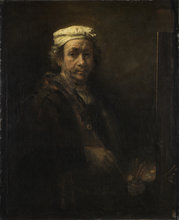 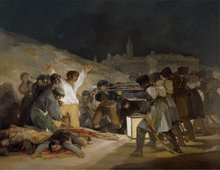