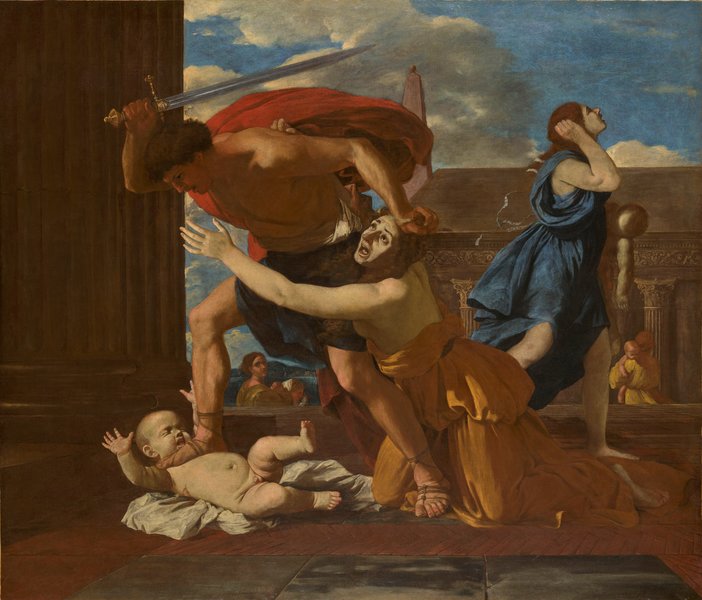 The date of this painting by Nicolas Poussin is disputed, but most historians allow that it dates to the years between 1632 and 1637 and was probably inspired by the publication of Poussin’s friend Giovanni Battista Marino’s epic-length poem, La Strage degli Innocenti (The Slaughter of the Innocents), published posthumously in 1632.

Marino’s poem is regarded as an outstanding example of how a horrific scene may be described in exquisite verse. Poussin similarly renders this ghastly event with almost classicizing beauty. Here Herod is absent and the setting appears to be the courtyard of a classical temple with a pyramid rising behind it.

The highly-reduced composition consists of only a few figures, with the three main characters depicted in a dramatic triangular arrangement. A bare-chested soldier with his foot upon a baby’s throat is raising his sword to slaughter him. With his left hand he grasps the hair of the desperate mother, who is pleading for her child’s life and trying to shield him with her own body. The soldier’s face and chest are shadowed. Instead the light strikes the mother’s face and outstretched arm along with the baby’s body. The woman’s open left hand reprises the flailing hands of the wailing baby. Another grief-stricken woman runs off to the right. Her face upturned, she appears to be shrieking in terror. In the background are three other female figures; one looks over her shoulder at the scene, one hides her eyes, the third may be making an escape.

Despite the suggestion of distant landscape, the action takes place in a shallow space, making the viewer observe it up close and as if seen from slightly below. And although the composition expresses a kind of sculptural stillness, as if frozen in time, the artist has also managed to express frenzied movement. The terrifying act and the pathos of the two women, delineated in lush colours and skilled rendering, achieve the combination attributed to the poet Marino: a juxtaposition of the horrific with the beautiful; tragedy and nobility.