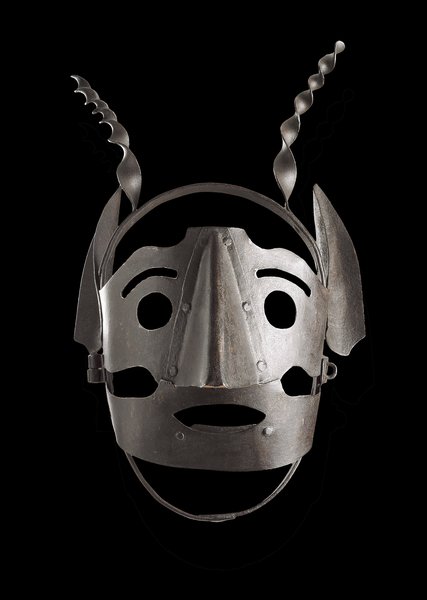 This formidable object was designed to be worn around the head. Called a branks or scold’s bridle, the manufacture of such headpieces arose in Britain from the 1500s and their use spread across Europe, until they were last deployed in the workhouses of the 1800s.

This object was designed as a form of social control through public shaming for those with wayward tongues, such as those thought to be gossips, those speaking insults or malice, or those who simply nagged or complained too often. The headpiece was worn as part of a public procession ordered by a magistrate. Many of these objects included a small length of metal that could be inserted into the mouth to firmly press the tongue down, so no speech could be uttered. In this state the wearer could neither drink nor swallow properly for the duration of this public parade of shaming.

In practice these scold’s bridles were used mainly on women. In this cultural period women were less able to speak in public or even to speak for themselves. This object was clearly designed to silence those women who had used their tongue to speak, and in speaking to assert any independence, wit, or wisdom that questioned the order of things.

Employing the tongue is a natural human response to dismantling pomposity and power. For subjugated people there is a tendency to speak otherwise, to find through scoffing, irony, or coded speech a means of asserting freedom from those who seek to enforce their silence.

This object is rather terrifying evidence of a form of control based on gender. One can only imagine the circumstances of the many women who would have been forced to wear this particular headpiece and their resulting public humiliation. In contrast to the forced silence this object threatens to achieve, there is a time for swearing, cursing, and cantankerous speech, especially if it is in the face of oppression and inhumane control. There is a time for tongues to be let loose. As the novelist Arundhati Roy (2004) states: ‘There’s really no such thing as the “voiceless”. There are only the deliberately silenced, or the preferably unheard’.

3Let not many of you become teachers, my brethren, for you know that we who teach shall be judged with greater strictness. 2For we all make many mistakes, and if any one makes no mistakes in what he says he is a perfect man, able to bridle the whole body also. 3If we put bits into the mouths of horses that they may obey us, we guide their whole bodies. 4Look at the ships also; though they are so great and are driven by strong winds, they are guided by a very small rudder wherever the will of the pilot directs. 5So the tongue is a little member and boasts of great things. How great a forest is set ablaze by a small fire!

6 And the tongue is a fire. The tongue is an unrighteous world among our members, staining the whole body, setting on fire the cycle of nature, and set on fire by hell. 7For every kind of beast and bird, of reptile and sea creature, can be tamed and has been tamed by humankind, 8but no human being can tame the tongue—a restless evil, full of deadly poison. 9With it we bless the Lord and Father, and with it we curse men, who are made in the likeness of God. 10From the same mouth come blessing and cursing. My brethren, this ought not to be so. 11Does a spring pour forth from the same opening fresh water and brackish? 12Can a fig tree, my brethren, yield olives, or a grapevine figs? No more can salt water yield fresh.