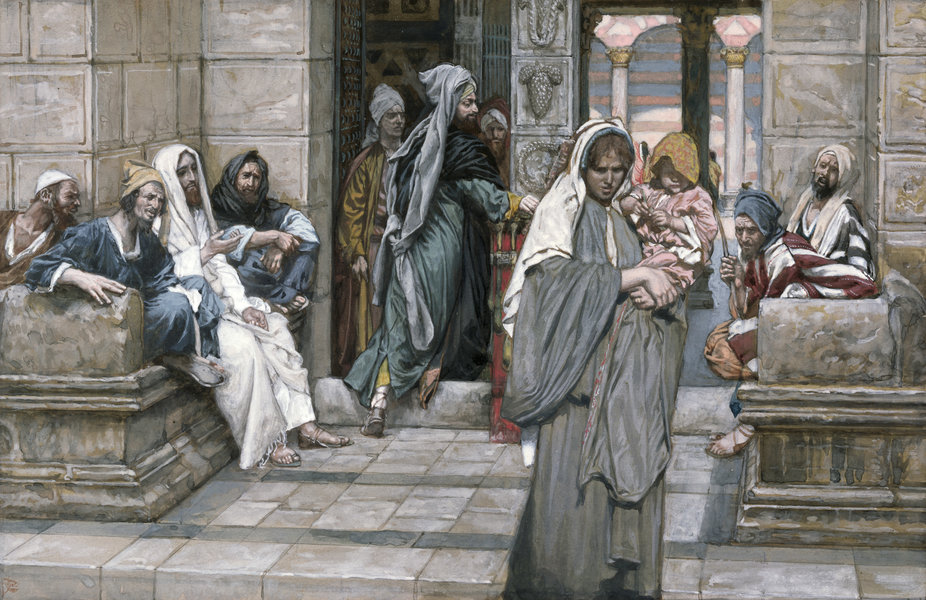 All She Had Left to Give

James Tissot (1836–1902) sought to reproduce as faithfully as possible ‘the physical appearance of Palestine and its people’ (Chu 2010). After Tissot converted to Christianity, he travelled to Egypt, Syria, and Palestine to visit the sites of Christ’s life. This painting is part of his famous Life of Christ series, which reimagined scenes from the Gospels. The series was so popular with American audiences that selections from the series ‘remained on almost continuous display for more than thirty years’ in the Brooklyn Museum in New York (Parks 2010: 91).

In this Gospel scene, a wealthy man (at the centre of the painting, though in the background) drops his gift into the Temple’s box. The widow who has just donated her last two pennies commands the foreground of the scene; she seems almost on the verge of stepping into the viewer’s space. But her gaze is directed downwards, avoiding all eye contact, as she hurries away. Almost nobody is looking at the rich man. Most of the onlookers, including Jesus and two of his disciples at the left of the painting, watch the woman as she departs. Jesus gestures toward her with approval, commending her generosity.

Only one disciple (at the far left, in the white cap) seems instead to be staring at the rich man. Perhaps this is Judas, who is accused of stealing from the disciples’ common purse (John 12:6) and who betrays Jesus for thirty pieces of silver (Matthew 26:15).

The two more hostile-looking men at the right of the painting are perhaps scribes—teachers of the law who were associated with the Temple. Just before the scene depicted here by Tissot, Jesus condemns the scribes, saying, ‘They devour widows’ houses’ (Mark 12:40). Tissot has, unusually, depicted the widow as a young woman with a small child, highlighting her vulnerability: both are dependent on the kindness of men such as these.