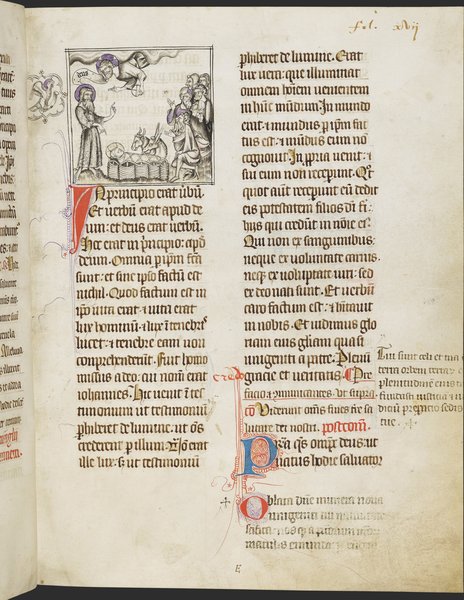 The First Witness of the Trinity

This depiction of John the Baptist preaching to the people and pointing to the infant Christ in the manger is from a mid-fourteenth century Franciscan missal produced in Paris. It is illuminated in grisaille (shades of grey) with coloured tints, reflecting contemporary taste for monochromatic work, which could be executed relatively economically.

In the margin is the symbol of John the Evangelist, the eagle, referring us to that Gospel. The baby is attended by the beasts traditional in Nativity scenes—and of course it was St Francis who first gave us the manger scene with its ox and ass.

An illumination that appears prior to this one in the manuscript (folio 10) also depicts John preaching—he is shown standing at the Jordan, as we might expect from the Gospel accounts. (In medieval accounts, he is classed as preacher as well as prophet and martyr.) The familiarity of that scene contrasts sharply with the apparent oddity of this one. According to the Gospel of Luke, John the Baptist was six months older than Christ. Here, he appears alongside the Christ child as adult.

This is a conscious anachronism. It can be read as a fleshing out of John 1:33–34, ‘And I have seen and have borne witness that this is the Son of God’.

The Son of God was manifest in flesh as the infant Christ. The Baptist sees and knows and (uniquely in John’s Gospel) witnesses to this ‘lamb’, who is to ‘take away the sin of the world’. And because it is a destiny Christ bore from his birth, John is here shown pointing to him as a baby. (Earlier in the story, at the Visitation, commentaries and images describe the unborn John greeting the foetal Christ.)

This in turn reflects one of the privileges of the Baptist according to Christian tradition, namely, that he was the first to whom the doctrine of the Trinity was revealed (McDonagh 2001: 82). John saw the Spirit as dove and heard the Father’s voice (God the Father is shown speaking to John from heaven both here and on fol. 10). But in this illumination the point is even more explicit. The word ‘Deus’ on the band refers not just to the Father but to the infant below. We are pointed by the Baptist to the triune God present in both the infant Christ and the Father in Heaven.

32And John bore witness, “I saw the Spirit descend as a dove from heaven, and it remained on him. 33I myself did not know him; but he who sent me to baptize with water said to me, ‘He on whom you see the Spirit descend and remain, this is he who baptizes with the Holy Spirit.’ 34And I have seen and have borne witness that this is the Son of God.”

35 The next day again John was standing with two of his disciples; 36and he looked at Jesus as he walked, and said, “Behold, the Lamb of God!” 37The two disciples heard him say this, and they followed Jesus. 38Jesus turned, and saw them following, and said to them, “What do you seek?” And they said to him, “Rabbi” (which means Teacher), “where are you staying?” 39He said to them, “Come and see.” They came and saw where he was staying; and they stayed with him that day, for it was about the tenth hour.