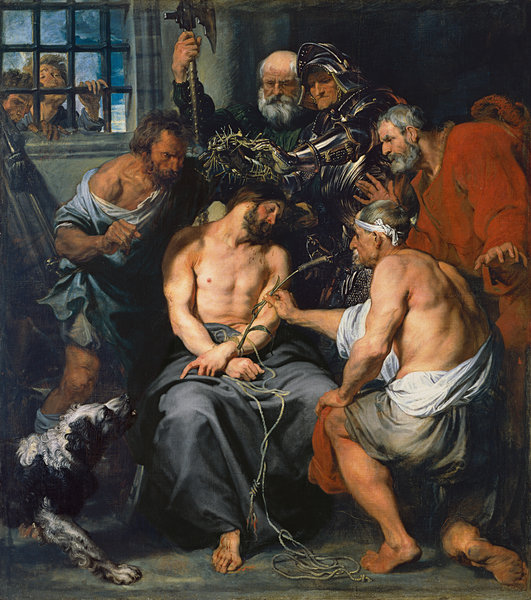 Anthony Van Dyck (1599–1641) vividly illustrates the cruelty during the crowning and robing in the common hall, as it is described in Matthew 27:27–31. In this interpretation of the narrative, a wearied, seated Christ occupies the central composition, surrounded by the soldiers of Pontius Pilate. An armour-clad figure sets a thorny crown on Christ’s head, while another man places a reed as a sceptre in his left hand. Christ is naked to the waist and turns his head to his left in humble resignation. His wrists are bound with a rope that falls loosely in his lap and coils on the floor beneath. As described in the biblical passage, the captors taunt him with the words, ‘Hail, King of the Jews!’

The drama of the episode is enhanced by the curious onlookers, who strain to view the scene through the barred window at left. Technical evidence reveals that Van Dyck added these figures in a later stage of the painting’s production. An earlier version of this painting (destroyed, Berlin, 1945), included a more imposing Roman soldier. Pentimenti in the Prado version indicate it originally had two soldiers at left, but Van Dyck painted them out, instead adding the barking spaniel in the lower corner, distinctly similar to the animal in Peter Paul Rubens’s Raising of the Cross (Cathedral of Our Lady, Antwerp).

Below the window, a beastly looking torturer lunges toward Christ, but seems to hesitate before striking him (John 19:3). The figure at the far right of the composition stretches his arms apart in a gesture of astonishment. These two figures, as well as the individuals peering through the window, suggest an element of hesitation and even wonderment not always seen in visual representations of Christ’s mocking. Is it possible that these men sense something of Jesus’s words to Pilate, ‘My kingship is not of this world; if my kingship were of this world, my servants would fight, that I might not be handed over to the Jews; but my kingship is not from the world’ (John 19:36)? By incorporating these ambiguous gestures, might Van Dyck be suggesting a moment of dawning revelation on the part of the Roman soldiers? 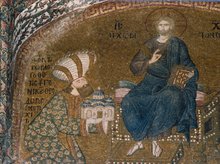 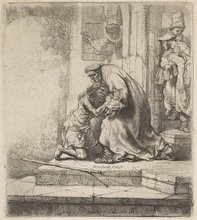 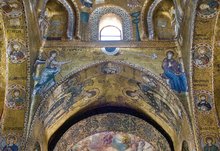 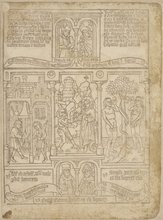