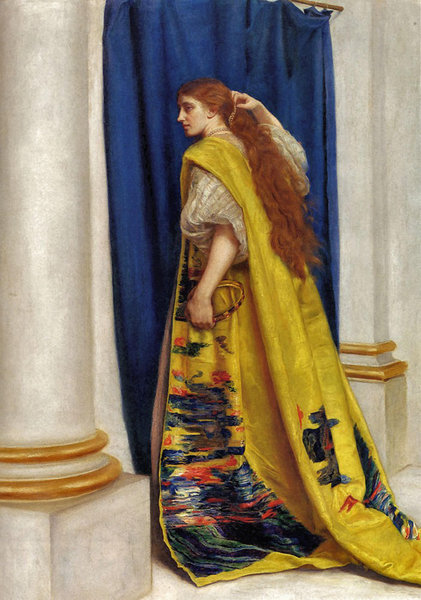 John Everett Millais emphasises Esther’s boldness. To state her case, she must enter the Persian king Ahasuerus’s private chamber. The white walls, gilded columns, and rich blue curtain heighten our awareness of this threshold and of her intrepidness in crossing it. This is the turning point of the narrative, in which Esther’s risky plea to the Persian king will result in the salvation of the Jews from genocidal persecution, Esther herself having been given ‘a measure of royal power, which she exercises along with [her cousin] Mordecai in the composition of the edict’ (Barton and Muddiman 2012: 648; see Esther 8:8–9).

Esther is both regal and, momentarily, informal. Her left hand holds her crown protectively; her right pulls at the ornament in her hair, loosening it in preparation for her impassioned meeting with the king. The brightly coloured striations blazing across the bottom of the billowing yellow silk cloak were a deliberate and innovative use of an unusual piece of clothing: a ceremonial coat offered in 1864 to the British general Charles Gordon by the Chinese government. Millais, a member of the Pre-Raphaelite Brotherhood, borrowed the coat in order to incorporate its likeness into this visual interpretation of Esther—a biblical heroine who spoke on behalf of her oppressed people within the confines of a strict state regime.

Interestingly, Millais represented the coat inside out, transforming its appearance from an Asian symbol of court life into an abstract pattern of woven threads (Rosenfeld and Smith 2007: 154). A gift between contemporary male leaders becomes a glossy, silken ‘armour’ for Esther, whose narrative is not only one of strength but also of vulnerability. Millais’s interpretation conflates Esther 5:1 and 8:1–12 (and references the ‘splendid attire’ mentioned in chapter 15 of the Greek Septuagint’s Additions to Esther). In Millais’s hands the silk jacket is both Esther’s raiment and a metaphor for her subversion of prevailing monarchical authority, as she turns the state system inside out from within.

8 On that day King Ahasu-eʹrus gave to Queen Esther the house of Haman, the enemy of the Jews. And Morʹdecai came before the king, for Esther had told what he was to her; 2and the king took off his signet ring, which he had taken from Haman, and gave it to Morʹdecai. And Esther set Morʹdecai over the house of Haman.

3 Then Esther spoke again to the king; she fell at his feet and besought him with tears to avert the evil design of Haman the Agʹagite and the plot which he had devised against the Jews. 4And the king held out the golden scepter to Esther, 5and Esther rose and stood before the king. And she said, “If it please the king, and if I have found favor in his sight, and if the thing seem right before the king, and I be pleasing in his eyes, let an order be written to revoke the letters devised by Haman the Agʹagite, the son of Hammedaʹtha, which he wrote to destroy the Jews who are in all the provinces of the king. 6For how can I endure to see the calamity that is coming to my people? Or how can I endure to see the destruction of my kindred?” 7Then King Ahasu-eʹrus said to Queen Esther and to Morʹdecai the Jew, “Behold, I have given Esther the house of Haman, and they have hanged him on the gallows, because he would lay hands on the Jews. 8And you may write as you please with regard to the Jews, in the name of the king, and seal it with the king’s ring; for an edict written in the name of the king and sealed with the king’s ring cannot be revoked.”

9 The king’s secretaries were summoned at that time, in the third month, which is the month of Sivan, on the twenty-third day; and an edict was written according to all that Morʹdecai commanded concerning the Jews to the satraps and the governors and the princes of the provinces from India to Ethiopia, a hundred and twenty-seven provinces, to every province in its own script and to every people in its own language, and also to the Jews in their script and their language. 10The writing was in the name of King Ahasu-eʹrus and sealed with the king’s ring, and letters were sent by mounted couriers riding on swift horses that were used in the king’s service, bred from the royal stud. 11By these the king allowed the Jews who were in every city to gather and defend their lives, to destroy, to slay, and to annihilate any armed force of any people or province that might attack them, with their children and women, and to plunder their goods, 12upon one day throughout all the provinces of King Ahasu-eʹrus, on the thirteenth day of the twelfth month, which is the month of Adar. 13A copy of what was written was to be issued as a decree in every province, and by proclamation to all peoples, and the Jews were to be ready on that day to avenge themselves upon their enemies. 14So the couriers, mounted on their swift horses that were used in the king’s service, rode out in haste, urged by the king’s command; and the decree was issued in Susa the capital.

15 Then Morʹdecai went out from the presence of the king in royal robes of blue and white, with a great golden crown and a mantle of fine linen and purple, while the city of Susa shouted and rejoiced. 16The Jews had light and gladness and joy and honor. 17And in every province and in every city, wherever the king’s command and his edict came, there was gladness and joy among the Jews, a feast and a holiday. And many from the peoples of the country declared themselves Jews, for the fear of the Jews had fallen upon them. 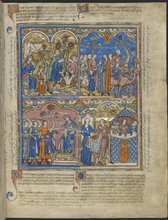 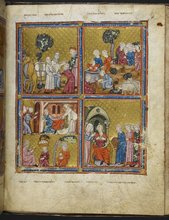 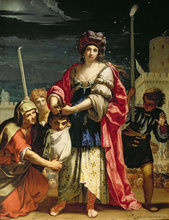