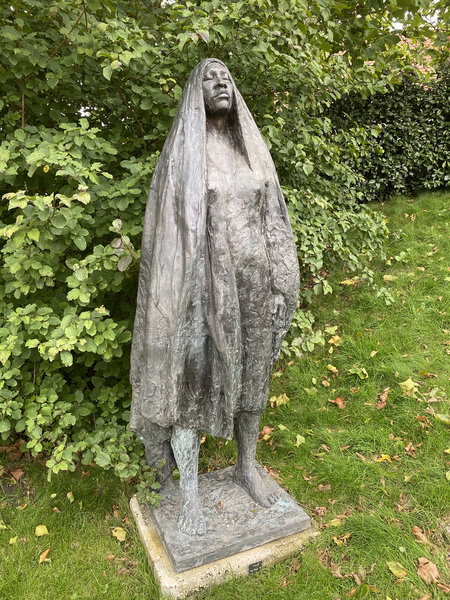 Karel Gomes’s Hagar is installed in a biblical sculpture garden in his native Netherlands. Even within the context of such a garden, one would perhaps not recognize the sculpture as a representation of Hagar since she is depicted entirely alone—without her son and without even a jug of water (her most common identifying attribute).

This sculpture could represent Hagar at different points in her story as it is related in Genesis: her entry into Abraham’s household, her abuse by Sarah, her first escape to the wilderness, her return to the household, or her expulsion. Given the lack of contextual clues, one might also interpret this figure as a contemporary African refugee. She wears a head covering and a thin dress. She has a full nose and lips, and her feet are bare. Her lack of belongings suggests she is without resources and without options. She is stoically resigned to her fate but her resolute expression suggests that she is still intent on survival.

Although Sarah ‘gives’ Hagar to Abraham as a wife, Hagar remains enslaved. Her connection to Abraham and her pregnancy do not exempt her from mistreatment. Furthermore, Hagar and her child are not safe even after carrying out Sarah’s plan. Life within the household continued to involve abuse. But Gomes’s work offers a glimpse of how life outside the control of the paterfamilias could have been even worse than that: a possible death sentence.

This work illustrates how the Hagar story is another instance in which a woman’s body is used for the benefit of those in power. This is an all-too familiar narrative of the expendability of women and their bodies. Like those today who are fleeing persecution in many forms, Hagar faces limited and life-altering choices, but despite the human and natural forces affecting her, she is determined to live. 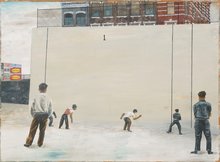