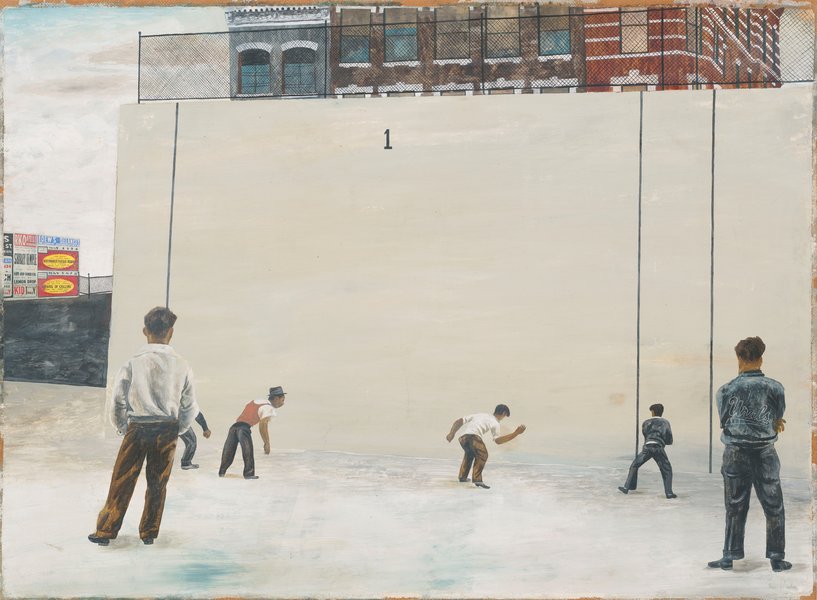 Labour of Rest, Labour of Leisure

The three Synoptic Gospels each tell our story slightly differently, but all imply that Jesus, rather than the Pharisees, is the one who stands in continuity with God’s will for the Sabbath. This contrast is especially marked in Matthew, where the story comes directly after Jesus’s saying that, ‘my yoke is easy, and my burden is light’ (Matthew 11:30). Matthew’s framing implies that the Pharisees have made the law into a ‘burdensome yoke’ (Basser and Cohen 2015: 283). This is ironic given that the Sabbath is meant to bring rest from the burden of work. The Pharisees are presented in the Gospels as having turned the mandate to rest into an unnecessarily arduous religious labour.

Shahn’s painting does not depict such organised collective exertion. Rather, it shows figures engaged informally and unofficially in a small-scale, improvised game; some are absorbed by it but others, in the foreground, adopt loitering postures. Considered in the social context of Depression-era America, this depiction ‘complicates the meaning of inactivity’, asking whether, in the absence of employment, leisurely play is only ‘productive’ when officially sanctioned (Fagg 2011: 1358).

One source from the time observes how, ‘enforced leisure drowned men with its once-coveted abundance … its taste became sour and brackish’ (Lynd and Lynd, 1937: 246). In contrast, in its depiction of informal, improvisatory play—generating absorption in some participants but loitering detachment, perhaps even boredom, in others—Handball suggests a vision of sport and leisure as organic and unburdened: ‘ritualised occurrences within ordinary, everyday life’ (Fagg 2011: 1366).

By comparison, Jesus interprets the Sabbath rules in a way that reemphasizes their role in meeting ordinary human needs and joys. The question of whether his followers’ way of resting is formally authorized by the religious officials of the day is incidental given that deeper purpose.

Basser, Herbert W. and Marsha B. Cohen. 2015. The Gospel of Matthew and Judaic Traditions: A Relevance-based Commentary (Leiden: Brill)

Fagg, John. 2011. ‘Sport and Spectatorship as Everyday Ritual in Ben Shahn's Painting and Photography’, The International Journal of the History of Sport, 28.8–9: 1353–69