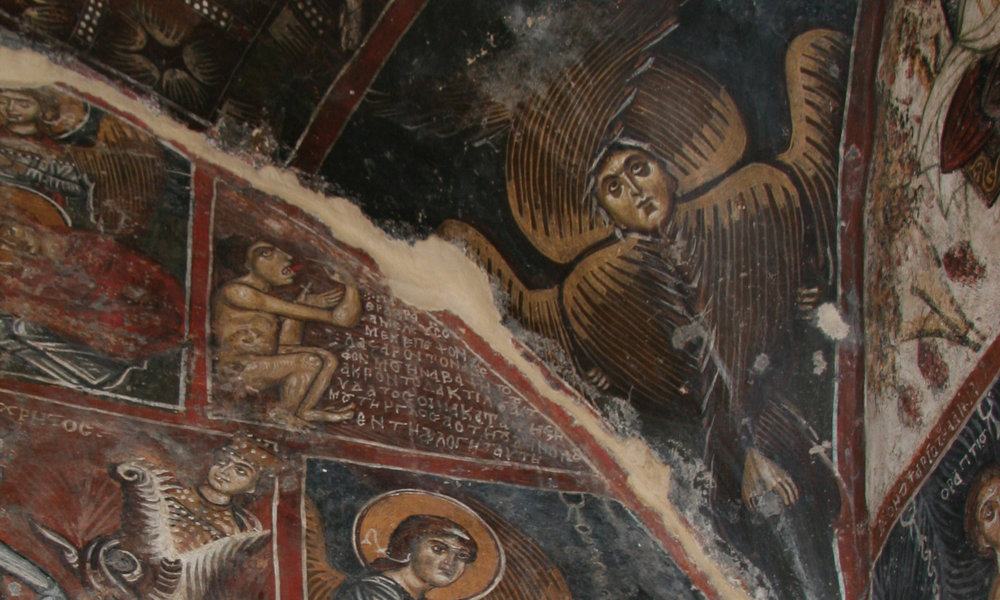 The Rich Man is hunched naked amidst the flames of hell, looking up at paradise where the once poor Lazarus is sheltered in Abraham’s bosom. The image is graphic like a comic book illustration. It even has a speech bubble, with (in medieval Greek), the Rich Man’s invocation: ‘Father Abraham, have mercy upon me, and send Lazarus to dip the end of his finger in water and cool my tongue; for I am in anguish in this flame’ (Luke 16:24). As if to clarify—perhaps for those medieval viewers unable to read—the Rich Man sticks out his tongue and touches it with his index finger.

It is not difficult to imagine a medieval audience quietly chuckling with Schadenfreude at the fate that has befallen this arrogant representative of the economic elite.

The painting is part of the rendering of paradise and hell in a cycle of the Last Judgement in a church in the small town of Kritsa on eastern Crete. Countless such wall paintings were made across the length and breadth of Crete in the fourteenth century, material testimony to the wealth generated on the island during the period when it was a dominion of Venice. Crete was an important way-station on Venice’s trade routes to the Middle East and the Venetians stimulated agriculture and the exploitation of natural resources such as wood and salt, shipping Cretan commodities to the far corners of Europe. The income of this trade appears to have trickled down to towns and villages, where it was used to build and decorate churches.

Yet, despite this fair distribution of wealth, the message of the consequences of economic inequality embedded in the story of the Rich Man and the Poor Lazarus does not seem to have lost any of its potency in this representation.

Lymberopoulou, A. (ed.). 2020 [forthcoming]. Hell in the Byzantine World: A History of Art and Religion in Venetian Crete and Eastern Mediterranean, vol. 1 (Cambridge: Cambridge University Press)

Lymberopoulou, A. and D. Duits. 2020 [forthcoming]. Hell in the Byzantine World: A History of Art and Religion in Venetian Crete and Eastern Mediterranean, vol. 2 (Cambridge: Cambridge University Press)