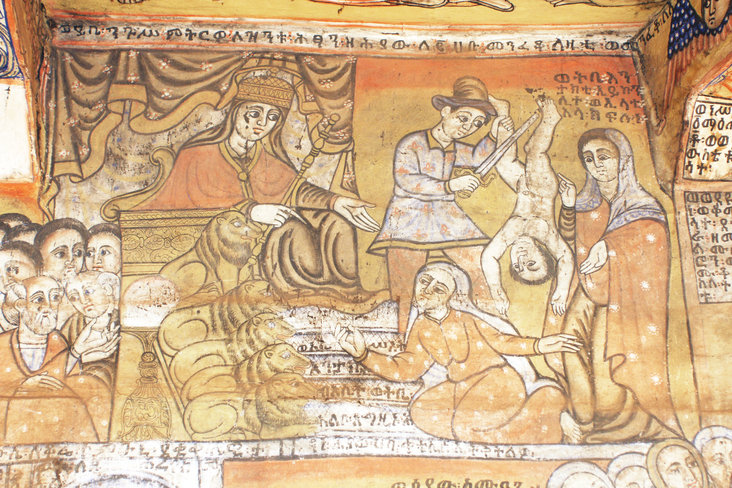 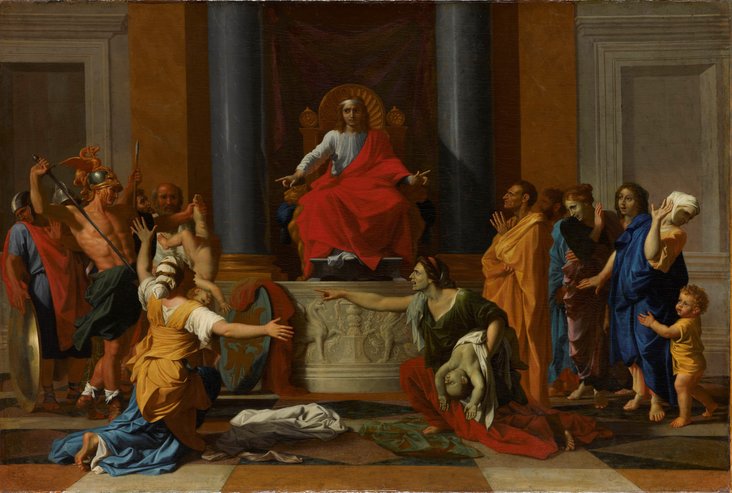 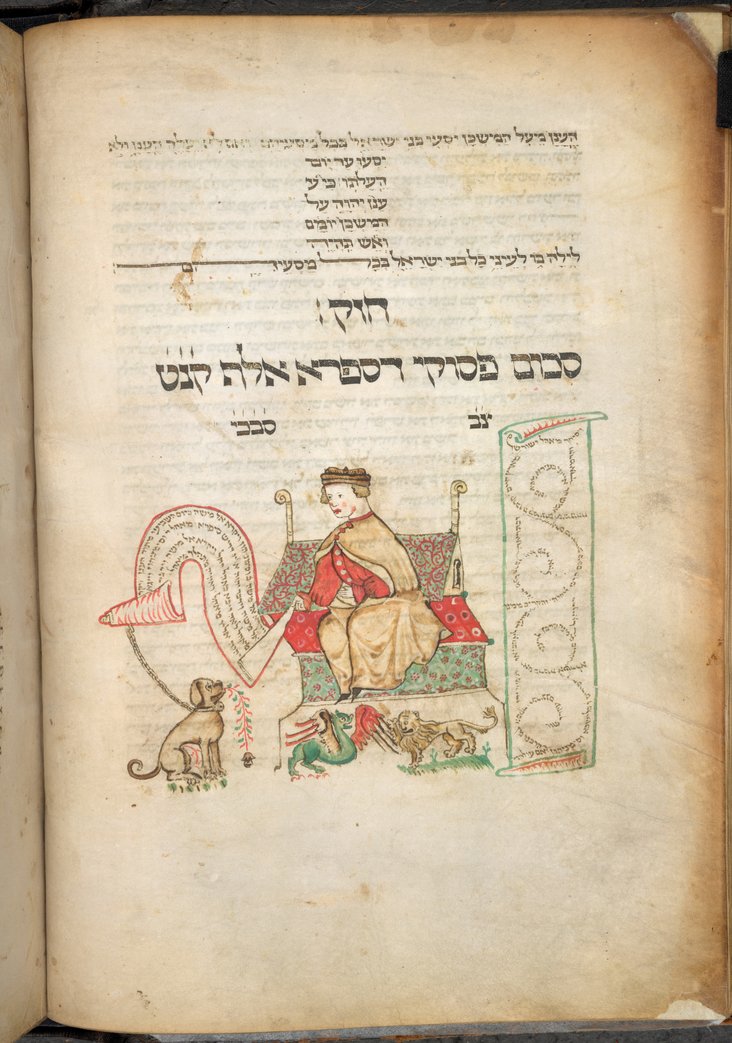 3 Solomon made a marriage alliance with Pharaoh king of Egypt; he took Pharaoh’s daughter, and brought her into the city of David, until he had finished building his own house and the house of the Lord and the wall around Jerusalem. 2The people were sacrificing at the high places, however, because no house had yet been built for the name of the Lord.

3 Solomon loved the Lord, walking in the statutes of David his father; only, he sacrificed and burnt incense at the high places. 4And the king went to Gibeon to sacrifice there, for that was the great high place; Solomon used to offer a thousand burnt offerings upon that altar. 5At Gibeon the Lord appeared to Solomon in a dream by night; and God said, “Ask what I shall give you.” 6And Solomon said, “Thou hast shown great and steadfast love to thy servant David my father, because he walked before thee in faithfulness, in righteousness, and in uprightness of heart toward thee; and thou hast kept for him this great and steadfast love, and hast given him a son to sit on his throne this day. 7And now, O Lord my God, thou hast made thy servant king in place of David my father, although I am but a little child; I do not know how to go out or come in. 8And thy servant is in the midst of thy people whom thou hast chosen, a great people, that cannot be numbered or counted for multitude. 9Give thy servant therefore an understanding mind to govern thy people, that I may discern between good and evil; for who is able to govern this thy great people?”

10 It pleased the Lord that Solomon had asked this. 11And God said to him, “Because you have asked this, and have not asked for yourself long life or riches or the life of your enemies, but have asked for yourself understanding to discern what is right, 12behold, I now do according to your word. Behold, I give you a wise and discerning mind, so that none like you has been before you and none like you shall arise after you. 13I give you also what you have not asked, both riches and honor, so that no other king shall compare with you, all your days. 14And if you will walk in my ways, keeping my statutes and my commandments, as your father David walked, then I will lengthen your days.”

15 And Solomon awoke, and behold, it was a dream. Then he came to Jerusalem, and stood before the ark of the covenant of the Lord, and offered up burnt offerings and peace offerings, and made a feast for all his servants.

16 Then two harlots came to the king, and stood before him. 17The one woman said, “Oh, my lord, this woman and I dwell in the same house; and I gave birth to a child while she was in the house. 18Then on the third day after I was delivered, this woman also gave birth; and we were alone; there was no one else with us in the house, only we two were in the house. 19And this woman’s son died in the night, because she lay on it. 20And she arose at midnight, and took my son from beside me, while your maidservant slept, and laid it in her bosom, and laid her dead son in my bosom. 21When I rose in the morning to nurse my child, behold, it was dead; but when I looked at it closely in the morning, behold, it was not the child that I had borne.” 22But the other woman said, “No, the living child is mine, and the dead child is yours.” The first said, “No, the dead child is yours, and the living child is mine.” Thus they spoke before the king.

23 Then the king said, “The one says, ‘This is my son that is alive, and your son is dead’; and the other says, ‘No; but your son is dead, and my son is the living one.’ ” 24And the king said, “Bring me a sword.” So a sword was brought before the king. 25And the king said, “Divide the living child in two, and give half to the one, and half to the other.” 26Then the woman whose son was alive said to the king, because her heart yearned for her son, “Oh, my lord, give her the living child, and by no means slay it.” But the other said, “It shall be neither mine nor yours; divide it.” 27Then the king answered and said, “Give the living child to the first woman, and by no means slay it; she is its mother.” 28And all Israel heard of the judgment which the king had rendered; and they stood in awe of the king, because they perceived that the wisdom of God was in him, to render justice.

7 Solomon had twelve officers over all Israel, who provided food for the king and his household; each man had to make provision for one month in the year. 8These were their names: Ben-hur, in the hill country of Eʹphraim; 9Ben-deker, in Makaz, Sha-alʹbim, Beth-sheʹmesh, and Eʹlon-beth-haʹnan; 10Ben-hesed, in Arubʹboth (to him belonged Socoh and all the land of Hepher); 11Ben-abinʹadab, in all Naphath-dor (he had Taphath the daughter of Solomon as his wife); 12Baʹana the son of Ahiʹlud, in Taʹanach, Megidʹdo, and all Beth-sheʹan which is beside Zarethan below Jezreel, and from Beth-sheʹan to Aʹbel-mehoʹlah, as far as the other side of Jokʹmeam; 13Ben-geber, in Ramoth-gilead (he had the villages of Jaʹir the son of Manasʹseh, which are in Gilead, and he had the region of Argob, which is in Bashan, sixty great cities with walls and bronze bars); 14Ahinʹadab the son of Iddo, in Mahanaʹim; 15Ahiʹma-az, in Naphʹtali (he had taken Basʹemath the daughter of Solomon as his wife); 16Baʹana the son of Hushai, in Asher and Bealoth; 17Jehoshʹaphat the son of Paruʹah, in Isʹsachar; 18Shimʹe-i the son of Ela, in Benjamin; 19Geber the son of Uri, in the land of Gilead, the country of Sihon king of the Amorites and of Og king of Bashan. And there was one officer in the land of Judah.

20 Judah and Israel were as many as the sand by the sea; they ate and drank and were happy. 21Solomon ruled over all the kingdoms from the Euphraʹtes to the land of the Philistines and to the border of Egypt; they brought tribute and served Solomon all the days of his life.

22 Solomon’s provision for one day was thirty cors of fine flour, and sixty cors of meal, 23ten fat oxen, and twenty pasture-fed cattle, a hundred sheep, besides harts, gazelles, roebucks, and fatted fowl. 24For he had dominion over all the region west of the Euphraʹtes from Tiphsah to Gaza, over all the kings west of the Euphraʹtes; and he had peace on all sides round about him. 25And Judah and Israel dwelt in safety, from Dan even to Beer-sheba, every man under his vine and under his fig tree, all the days of Solomon. 26Solomon also had forty thousand stalls of horses for his chariots, and twelve thousand horsemen. 27And those officers supplied provisions for King Solomon, and for all who came to King Solomon’s table, each one in his month; they let nothing be lacking. 28Barley also and straw for the horses and swift steeds they brought to the place where it was required, each according to his charge.

29 And God gave Solomon wisdom and understanding beyond measure, and largeness of mind like the sand on the seashore, 30so that Solomon’s wisdom surpassed the wisdom of all the people of the east, and all the wisdom of Egypt. 31For he was wiser than all other men, wiser than Ethan the Ezʹrahite, and Heman, Calcol, and Darda, the sons of Mahol; and his fame was in all the nations round about. 32He also uttered three thousand proverbs; and his songs were a thousand and five. 33He spoke of trees, from the cedar that is in Lebanon to the hyssop that grows out of the wall; he spoke also of beasts, and of birds, and of reptiles, and of fish. 34And men came from all peoples to hear the wisdom of Solomon, and from all the kings of the earth, who had heard of his wisdom.