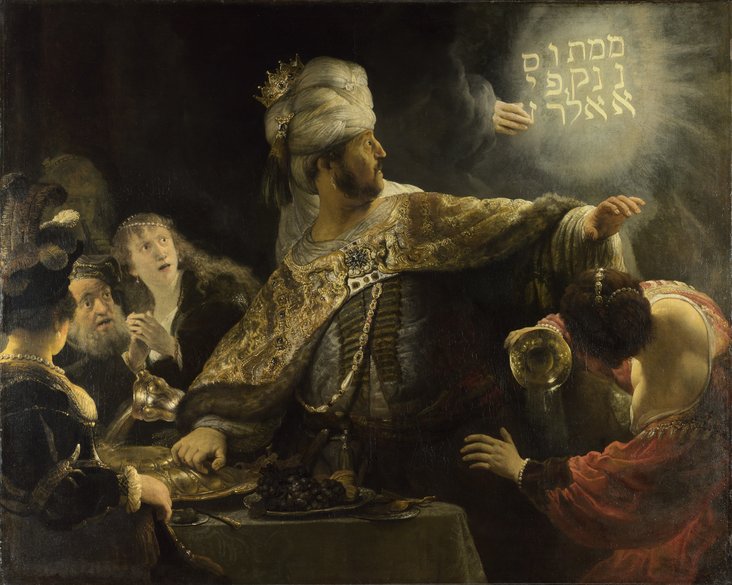 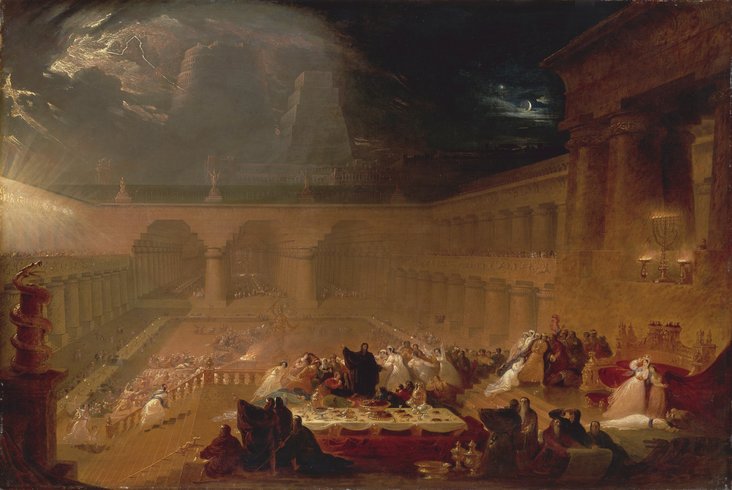 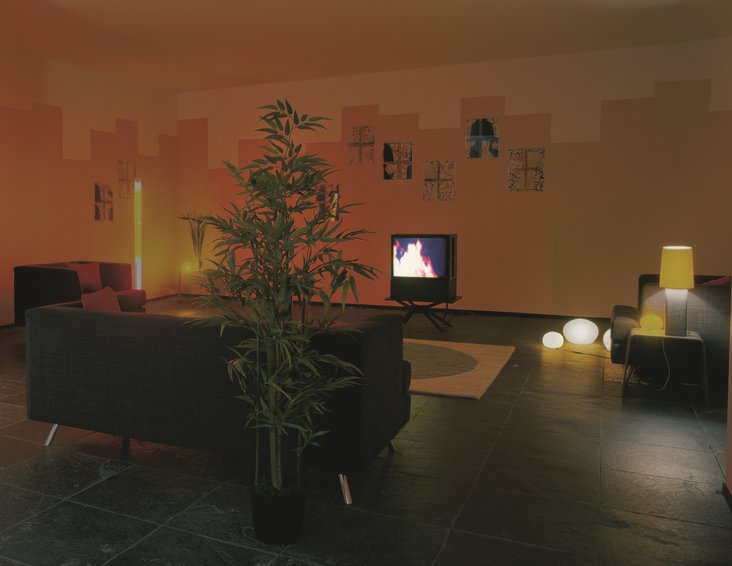 5 King Belshazʹzar made a great feast for a thousand of his lords, and drank wine in front of the thousand.

5 Immediately the fingers of a man’s hand appeared and wrote on the plaster of the wall of the king’s palace, opposite the lampstand; and the king saw the hand as it wrote. 6Then the king’s color changed, and his thoughts alarmed him; his limbs gave way, and his knees knocked together. 7The king cried aloud to bring in the enchanters, the Chaldeʹans, and the astrologers. The king said to the wise men of Babylon, “Whoever reads this writing, and shows me its interpretation, shall be clothed with purple, and have a chain of gold about his neck, and shall be the third ruler in the kingdom.” 8Then all the king’s wise men came in, but they could not read the writing or make known to the king the interpretation. 9Then King Belshazʹzar was greatly alarmed, and his color changed; and his lords were perplexed.

10 The queen, because of the words of the king and his lords, came into the banqueting hall; and the queen said, “O king, live for ever! Let not your thoughts alarm you or your color change. 11There is in your kingdom a man in whom is the spirit of the holy gods. In the days of your father light and understanding and wisdom, like the wisdom of the gods, were found in him, and King Nebuchadnezʹzar, your father, made him chief of the magicians, enchanters, Chaldeʹans, and astrologers, 12because an excellent spirit, knowledge, and understanding to interpret dreams, explain riddles, and solve problems were found in this Daniel, whom the king named Belteshazʹzar. Now let Daniel be called, and he will show the interpretation.”

13 Then Daniel was brought in before the king. The king said to Daniel, “You are that Daniel, one of the exiles of Judah, whom the king my father brought from Judah. 14I have heard of you that the spirit of the holy gods is in you, and that light and understanding and excellent wisdom are found in you. 15Now the wise men, the enchanters, have been brought in before me to read this writing and make known to me its interpretation; but they could not show the interpretation of the matter. 16But I have heard that you can give interpretations and solve problems. Now if you can read the writing and make known to me its interpretation, you shall be clothed with purple, and have a chain of gold about your neck, and shall be the third ruler in the kingdom.”

17 Then Daniel answered before the king, “Let your gifts be for yourself, and give your rewards to another; nevertheless I will read the writing to the king and make known to him the interpretation. 18O king, the Most High God gave Nebuchadnezʹzar your father kingship and greatness and glory and majesty; 19and because of the greatness that he gave him, all peoples, nations, and languages trembled and feared before him; whom he would he slew, and whom he would he kept alive; whom he would he raised up, and whom he would he put down. 20But when his heart was lifted up and his spirit was hardened so that he dealt proudly, he was deposed from his kingly throne, and his glory was taken from him; 21he was driven from among men, and his mind was made like that of a beast, and his dwelling was with the wild asses; he was fed grass like an ox, and his body was wet with the dew of heaven, until he knew that the Most High God rules the kingdom of men, and sets over it whom he will. 22And you his son, Belshazʹzar, have not humbled your heart, though you knew all this, 23but you have lifted up yourself against the Lord of heaven; and the vessels of his house have been brought in before you, and you and your lords, your wives, and your concubines have drunk wine from them; and you have praised the gods of silver and gold, of bronze, iron, wood, and stone, which do not see or hear or know, but the God in whose hand is your breath, and whose are all your ways, you have not honored.

24 “Then from his presence the hand was sent, and this writing was inscribed. 25And this is the writing that was inscribed: mene, mene, tekel, and parsin. 26This is the interpretation of the matter: mene, God has numbered the days of your kingdom and brought it to an end; 27tekel, you have been weighed in the balances and found wanting; 28peres, your kingdom is divided and given to the Medes and Persians.”

29 Then Belshazʹzar commanded, and Daniel was clothed with purple, a chain of gold was put about his neck, and proclamation was made concerning him, that he should be the third ruler in the kingdom.

30 That very night Belshazʹzar the Chaldeʹan king was slain. 31And Darius the Mede received the kingdom, being about sixty-two years old.