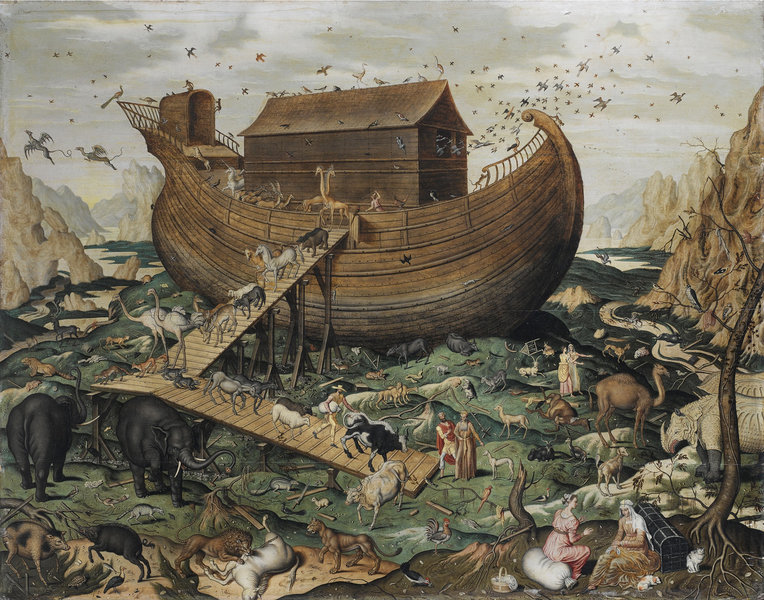 This is the only known signed work by Simon de Myle and only a little is known about his life. His style is typical for Flemish Mannerism, although his career may perhaps be linked to the French school of Fontainebleau. The painting is remarkable for the quality and the originality of its composition which the artist signed as ‘inventor’.

Noah’s ark, a giant wooden ship, rests in a vast rocky landscape, the mountains of Ararat. Pairs of animals make their exit over an elaborate L-shaped ramp while a multitude of other animals fill the earth and sky. Noah, his wife, his three sons Shem, Ham, and Japheth, as well as their wives, are all depicted in the painting. Most prominent are the two seated women in the foreground; rapidly decreasing in scale, Noah and one of his sons appear at the end of the ramp; the two other sons busy themselves to help disembark the animals; while the two other wives are placed further in the landscape, pointing to the animals.

An incredible variety of different species of animals is portrayed, from massive elephants to tiny mice. One animal that attracts specific attention is the large rhinoceros to the right. It is inspired by Albrecht Dürer’s engraving from 1515 showing the rhinoceros presented by the Sultan of Cambay as a gift to King Manuel I of Portugal.

Although the artist was seeking to depict the animals as realistically as possible, he also included some purely mythical beasts. According to Eric Mickler, an expert in natural history, people at that time truly believed in the existence of dragons, griffins, and unicorns which is why these appear here. However, according to legend, the unicorn had refused Noah’s invitation to enter the ark because it felt strong enough to survive the deluge alone. It swam for forty days but on the last day, when the waters began to recede, an eagle landed on its horn and because of the weight of the bird the exhausted unicorn drowned.

Simon de Myle, however, has included the unicorn in his painting, making the work an even fuller celebration of the abundance and multiplicity of this ‘second creation’: