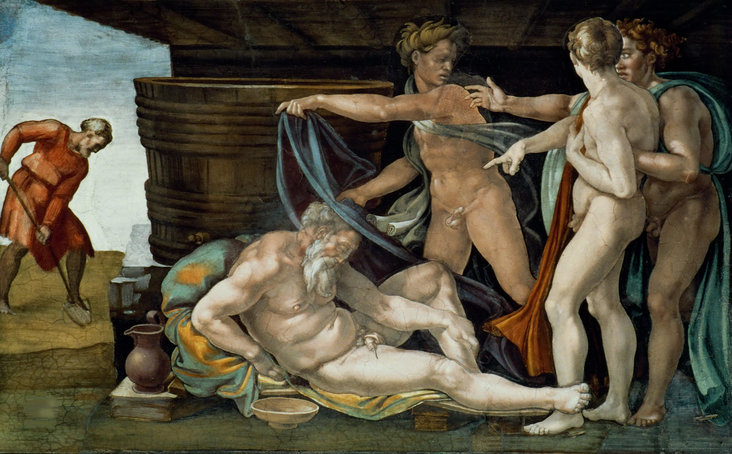 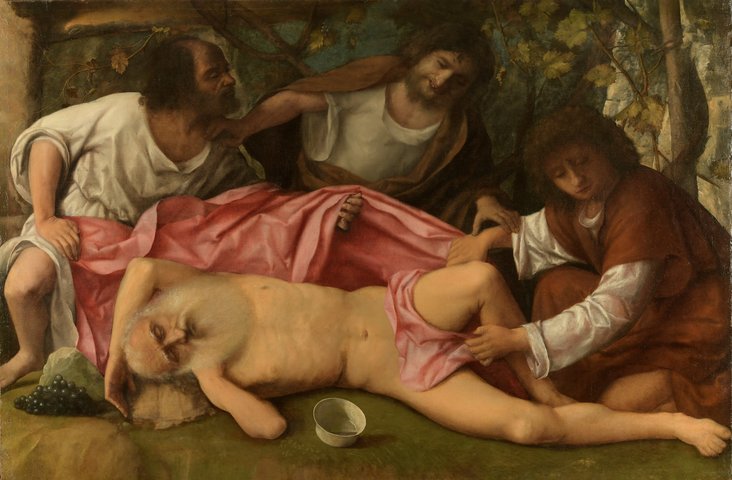 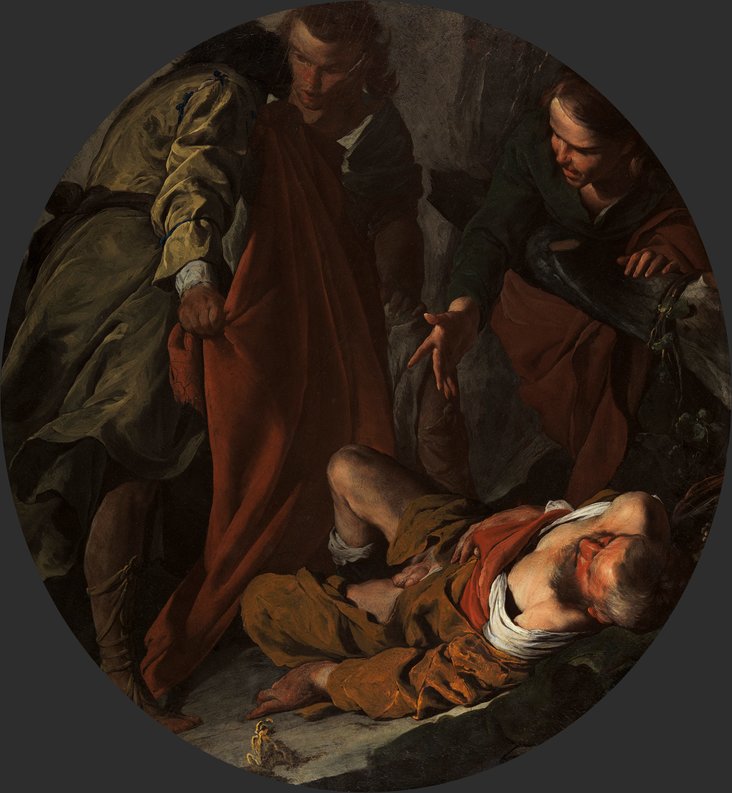 18 The sons of Noah who went forth from the ark were Shem, Ham, and Japheth. Ham was the father of Canaan. 19These three were the sons of Noah; and from these the whole earth was peopled.

20 Noah was the first tiller of the soil. He planted a vineyard; 21and he drank of the wine, and became drunk, and lay uncovered in his tent. 22And Ham, the father of Canaan, saw the nakedness of his father, and told his two brothers outside. 23Then Shem and Japheth took a garment, laid it upon both their shoulders, and walked backward and covered the nakedness of their father; their faces were turned away, and they did not see their father’s nakedness. 24When Noah awoke from his wine and knew what his youngest son had done to him, 25he said,

“Blessed by the Lord my God be Shem;

and let Canaan be his slave.

and let him dwell in the tents of Shem;

and let Canaan be his slave.”

10 These are the generations of the sons of Noah, Shem, Ham, and Japheth; sons were born to them after the flood.

2 The sons of Japheth: Gomer, Magog, Madai, Javan, Tubal, Meshech, and Tiras. 3The sons of Gomer: Ashʹkenaz, Riphath, and Togarʹmah. 4The sons of Javan: Eliʹshah, Tarshish, Kittim, and Doʹdanim. 5From these the coastland peoples spread. These are the sons of Japheth in their lands, each with his own language, by their families, in their nations.

6 The sons of Ham: Cush, Egypt, Put, and Canaan. 7The sons of Cush: Seba, Havʹilah, Sabtah, Raʹamah, and Sabʹteca. The sons of Raʹamah: Sheba and Dedan. 8Cush became the father of Nimrod; he was the first on earth to be a mighty man. 9He was a mighty hunter before the Lord; therefore it is said, “Like Nimrod a mighty hunter before the Lord.” 10The beginning of his kingdom was Babel, Erech, and Accad, all of them in the land of Shinar. 11From that land he went into Assyria, and built Ninʹeveh, Rehoʹboth-Ir, Calah, and 12Resen between Ninʹeveh and Calah; that is the great city. 13Egypt became the father of Ludim, Anʹamim, Lehaʹbim, Naph-tuʹhim, 14Pathruʹsim, Casluʹhim (whence came the Philistines), and Caphʹtorim.

15 Canaan became the father of Sidon his first-born, and Heth, 16and the Jebʹusites, the Amorites, the Girʹgashites, 17the Hivites, the Arkites, the Sinites, 18the Arʹvadites, the Zemʹarites, and the Haʹmathites. Afterward the families of the Canaanites spread abroad. 19And the territory of the Canaanites extended from Sidon, in the direction of Gerar, as far as Gaza, and in the direction of Sodom, Gomorʹrah, Admah, and Zeboiʹim, as far as Lasha. 20These are the sons of Ham, by their families, their languages, their lands, and their nations.

21 To Shem also, the father of all the children of Eber, the elder brother of Japheth, children were born. 22The sons of Shem: Elam, Asshur, Arpachʹshad, Lud, and Aram. 23The sons of Aram: Uz, Hul, Gether, and Mash. 24Arpachʹshad became the father of Shelah; and Shelah became the father of Eber. 25To Eber were born two sons: the name of the one was Peleg, for in his days the earth was divided, and his brother’s name was Joktan. 26Joktan became the father of Almoʹdad, Sheleph, Hazarmaʹveth, Jerah, 27Hadorʹam, Uzal, Diklah, 28Obal, Abimʹa-el, Sheba, 29Ophir, Havʹilah, and Jobab; all these were the sons of Joktan. 30The territory in which they lived extended from Mesha in the direction of Sephar to the hill country of the east. 31These are the sons of Shem, by their families, their languages, their lands, and their nations.

32 These are the families of the sons of Noah, according to their genealogies, in their nations; and from these the nations spread abroad on the earth after the flood.