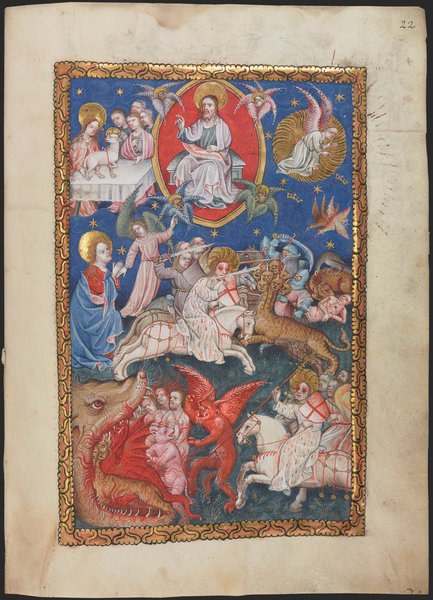 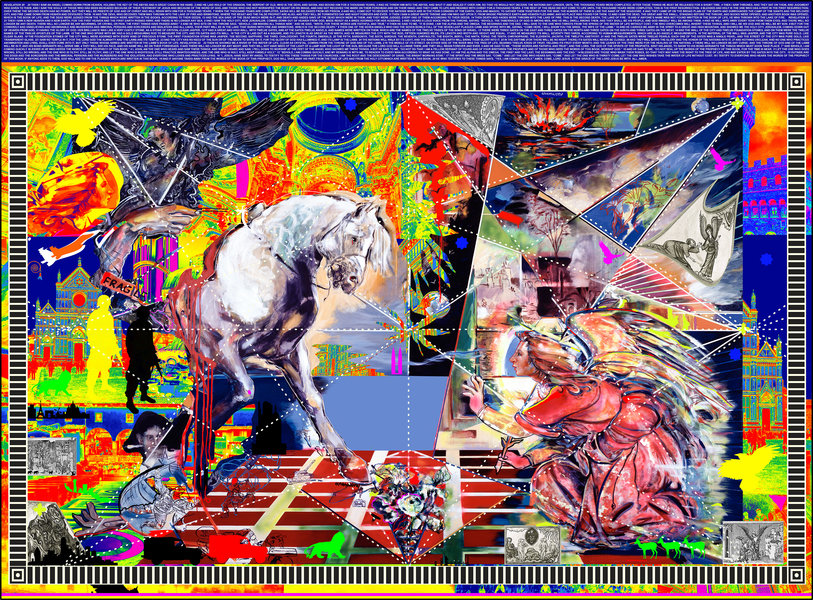 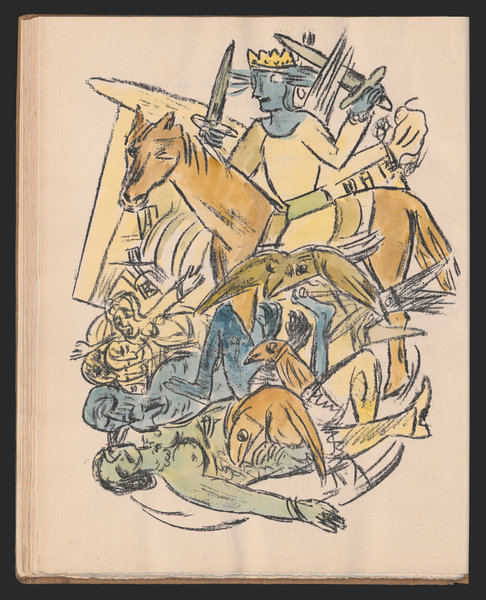 Renderings of the Rider

These three artworks, spanning a time period of over six hundred years, are all taken from Apocalypse cycles. That is, each is part of a rendering of the whole text of Revelation. The Flemish Apocalypse takes a more narrative approach to the source-text, while Max Beckmann focuses in on a few discrete verses from various chapters, and Irene Barberis juxtaposes her own visualizations of elements of Revelation’s text with inherited historical images.

Interestingly, for two images produced in the twentieth and twenty-first centuries, both Beckmann and Barberis retain the very text of Revelation as an integral part of their work. Similarly, in The Flemish Apocalypse, each of the twenty-two images appears opposite the corresponding chapter of text.

However, the relationship between text and image differs in each case. The Flemish image serves more as a straightforward illustration of Scripture. This is less a visual commentary and more a visual parallel, with hardly any textual detail left un-visualized, no matter how awkward the result. Such ‘compressed’ visual narrative does nevertheless give rise to an exegetical question, in that it gives the viewer the opportunity to reflect upon the different aspects of Jesus Christ that John presents us with in Revelation (the Lamb, the messianic figure, and the conflation with God the Father). In this image, all three aspects of Christ are unabashedly placed side by side. They are perhaps necessary counterparts to one another, although it is worth noting that it is the Lamb alone who is depicted in the final image of the Flemish series, the New Jerusalem, thus indicating an ultimately privileged position for this figure.

In contrast, Beckmann prioritises particular aspects of the final verses of Revelation 19, and possibly just 19:21. Although the Rider, his horse, and the birds are striking figures, their victims (especially the possible Whore of Babylon figure) are equally visually arresting. Beckmann identified himself with John the seer and also with Revelation’s victims to explore the human cost of Armageddon—something only implied by the text itself—and to further his long-standing critique of the futility of war. In many ways this series therefore represents a questioning—welcome for some—of the rigid certainties of Revelation, with its ‘black and white’ view of the world and of good and evil. Similarly, if the figure at the front of the image is to be interpreted as the Whore of Babylon, then Beckmann is also encouraging us to consider (as some feminist critics of Revelation have done) whether she is as much a victim as a beneficiary of the ‘Beasts’ (she is said to be destroyed by them in Revelation 17:16). Once again, Beckmann appears to be ‘complicating’ Revelation in ways that will be embraced by some and which others will find troubling.

Barberis offers something different again. Although in a very different medium, her work is like the fourteenth-century Angers Apocalypse Tapestry, in that it must be experienced physically, by walking alongside its three-metre-high panels. The experience is less one of intense contemplation in which one is drawn deeply into one image at a time (as with the Flemish and Beckmann images) and more one of full-body immersion in the narrative and themes of Revelation, a sensation compounded by Barberis’s use of different types of light during the viewing experience. Thus, one is asked to consider not just the Rider on the White Horse, here depicted mainly as the White Horse, but how this figure fits within the overall narrative of Revelation. Just as the rendering of Sandro Botticelli’s Gabriel functions in this panel as a forerunner to the White Horse, so the Horse is presented as a necessary forerunner to the New Jerusalem (shown in the final panel), trampling easily over its earthly opponents. Ultimately, it is not the Horse that matters but the reality for which it clears the way.

Just as the Rider himself has been ‘unseated’ by Barberis, so the force of the messianic figure motif (so prominent in the Flemish image) has been erased. Neither the White Horse nor the Rider are really the agents of the establishment of the New Jerusalem; they are merely symbols of its coming. As Barberis herself has said, her Horse and ephemeral Rider represent the breaking of the ‘division of the heavenly and the earthly’ (Barberis and Brown 2017). While in some ways Berberis’s tapestry represents a radical and highly personal reading of Revelation, in this sequence the agency is placed firmly back with God. Albeit in a very different, more provocative way, the deterministic character of Revelation brought out so forcefully in the Flemish images is upheld here too.

Carey, Frances. 1999. The Apocalypse and the Shape of Things to Come (London: British Museum Press)

O’Hear, Natasha, and Anthony O’Hear. 2015. Picturing the Apocalypse: The Book of Revelation in the Arts over Two Millennia (Oxford: Oxford University Press) 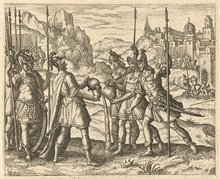 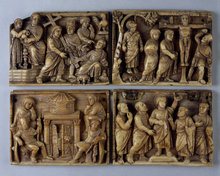 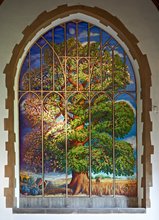 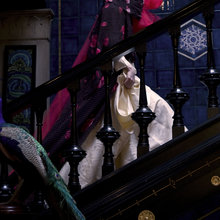 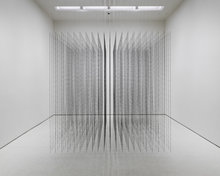 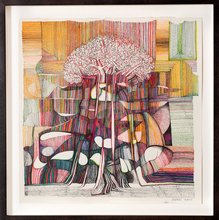