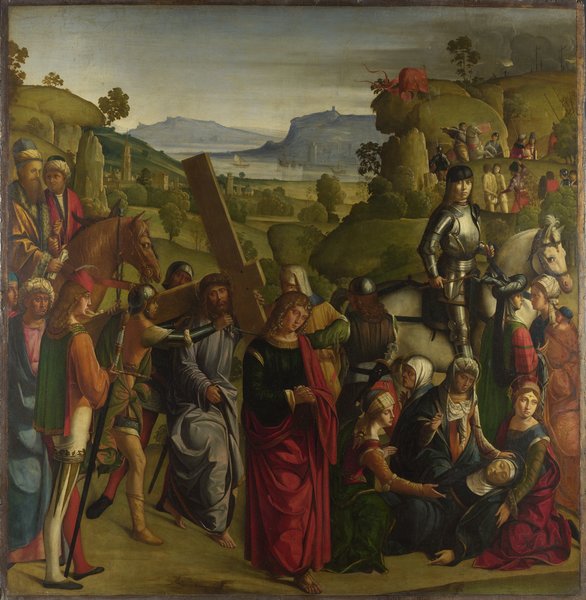 This small altarpiece was made for a new chancel screen in the church of San Domenico in Cremona by Boccaccio Boccaccino probably in the first years of the sixteenth century. It is unusual in several respects.

Firstly, two prominent figures—one holding a large sword on the left and the other mounted and wearing armour on the right—appear to be portraits and it is more usual for such figures to be depicted at prayer, witnesses of a sacred event rather than participants (apparently in this case among the Romans presiding over the Crucifixion). It was also very unusual for the subject of Christ carrying the Cross to be employed for an altarpiece. But this is not the only subject. The most beautiful part of the painting is the group of women around the collapsed figure of the Virgin Mary in the right foreground: a composition of great fluency with internal rhyming supplied by deliberate repetition in the hands.

The most prominent figure in the painting is St John standing in the centre and dividing the composition into separate parts. It is striking that he is in the very pose which was usually given to him by artists when they painted him standing beside the cross. A beautiful drawing survives for the Virgin Mary which differs in that her whole figure is represented. There is in addition no real unity to the painting, even though what we see on the right can be understood as a reaction to what we see on the left.

One explanation for this may be that the subject of the painting underwent a major change whilst it was being planned. Some support for this hypothesis may be found in the fact that some parts of the painting (notably the figures in the landscape) seem to be hastily improvised, whereas others (notably the armour with its reflections) are rendered with painstaking care.

Either way, although the Crucifixion itself is yet to come, it seems almost already to be adumbrated here in the posture of the beloved disciple, and the distress of the Blessed Virgin.