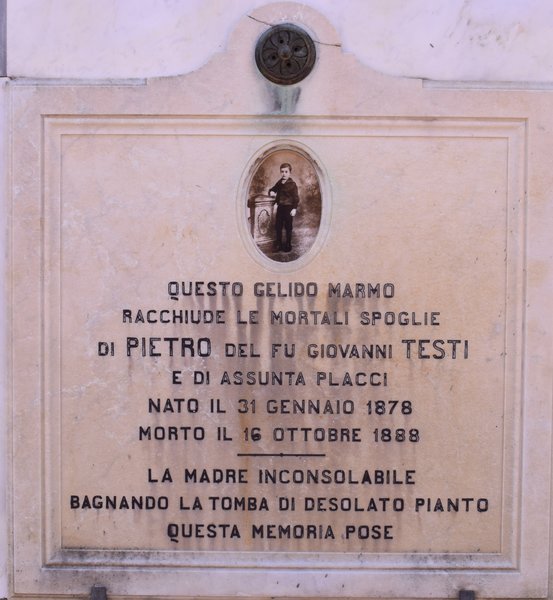 When little Pietro Testi died on 16 October 1888 at the age of ten, he left his mother Assunta Placci in tears—just like the woman of Nain. Having lost her husband the year before, she was still a mourning widow when she had to carry yet another family member to the Cimitero delle Porte Sante, the most prestigious cemetery of the city of Florence in Italy. Buried right beside the grave of his father, Pietro’s tombstone became the visual expression of her desperate grief and sorrow. Right above the inscription, which cites his name and describes the inconsolable pain of his mother, we can see a photographic portrait of the boy. Leaning against a stele, he looks at the beholder and is standing upright in front of a traditional photostudio setting which features an open landscape with trees.

As the signature by the feet of Pietro Testi tells us, this portrait was made by the Fratelli Bucciolini, one of the first companies to offer photoceramic portraits in Florence. After the invention of the technique in the 1850s, which allowed for the transfer of photographic images onto porcelain by using enamel pigments, they became increasingly fashionable in Italian cemeteries. Resisting time and weather without any difficulty, these portraits were almost unalterable and thus ideal for preserving a living memory of friends and family.

Engaging in intimate discussions or simply praying with the portraits of the deceased was considered a healthy practice and was recommended by Italian physiologists of the time. It was thought to help channel feelings of fear and desperation and was particularly advised for women, who were believed (and expected) to suffer from tragic losses more profoundly than men.

This perception of female grief was particularly strong in a Catholic country where the Virgin Mary was idealized as a role model: ‘a widowed mother for only sons’ (Ambrose, Exposition on Luke 5.92), she was considered a model of mourning, and it was suggested that the bereaved might address her directly in their prayers.

During the lifetime of Assunta Placci this divine model of female mourning was still exemplary and a photoceramic portrait of her son might have helped her to canalise her sorrow: Even though Pietro Testi never came back to life like the son of the widow of Nain, his portrait kept him present and assured him a place among the living.

Ambrose of Milan, Exposition on the Gospel of Luke. 1998. Trans. by T. Tomkinson, in Exposition of the Holy Gospel According to Saint Luke with Fragments on the Prophecy of Isias (Enta, CA: Center for Traditionalist Orthodox Studies)