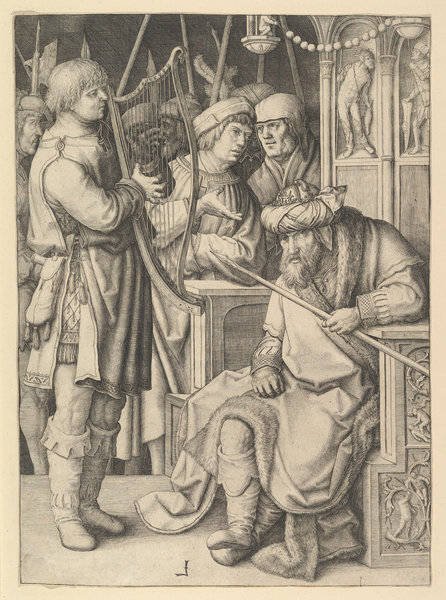 Northern early modern artists routinely chose a grotesque register for their sacred scenes, but not any episode of Christian iconography would be considered apt for that treatment. While The Mocking of Christ or The Temptation of Saint Anthony were habitual occasions for outlandish grimaces and physical deformities of all kinds, the solemn, even lyrical story of David musically assuaging King Saul’s bad mood hardly seems to call for such handling. And yet, Lucas van Leyden, an artist often described as a Northern Mannerist, gives his figures that unmistakable aesthetic, shunning ideal beauty for the sake of a more piquant, slightly ridiculous presentation of his subjects.

Saul, in particular, is far from noble-looking; by contrast with what the biblical text affirms, David’s music seems to have had no effect on the ‘evil spirit from God’ that torments him (1 Samuel 16:14). Understandably perhaps: David’s perfunctory playing and stiff posture hardly appear inspiring. The king’s grumpiness—or otherwise more serious mental illness, such as the Dutch biographer Karel van Mander detected in Saul’s face here as early as 1604 (Wagini 2017)—is compounded by his (involuntary?) gesture of pointing his spear towards David, an obvious anticipation of the later episode (1 Samuel 18:10–13) in which Saul will attack the musician with that same weapon. Indeed, the two biblical passages are often conflated in early modern images.

The medium of engraving, with its reproducibility and thus a far broader audience than painting, lends itself to a lighter tone, or at least to the inclusion of anecdotal detail ensuring the immediate curiosity of potential buyers. Inherent to such a variety of details is the presence of bystanders, densely crowding the background of the scene, and the vivacious, comically graceful sculptural reliefs adorning the king’s throne. At least one of the latter decorations—possibly Cain assassinating his brother Abel—presents darker overtones hinting at Saul’s madness, as it depicts a violent attack. 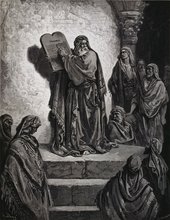 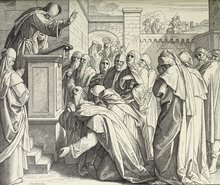 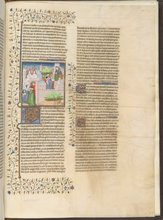 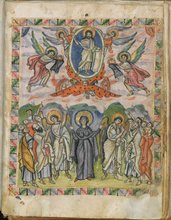 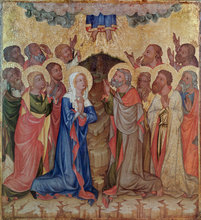