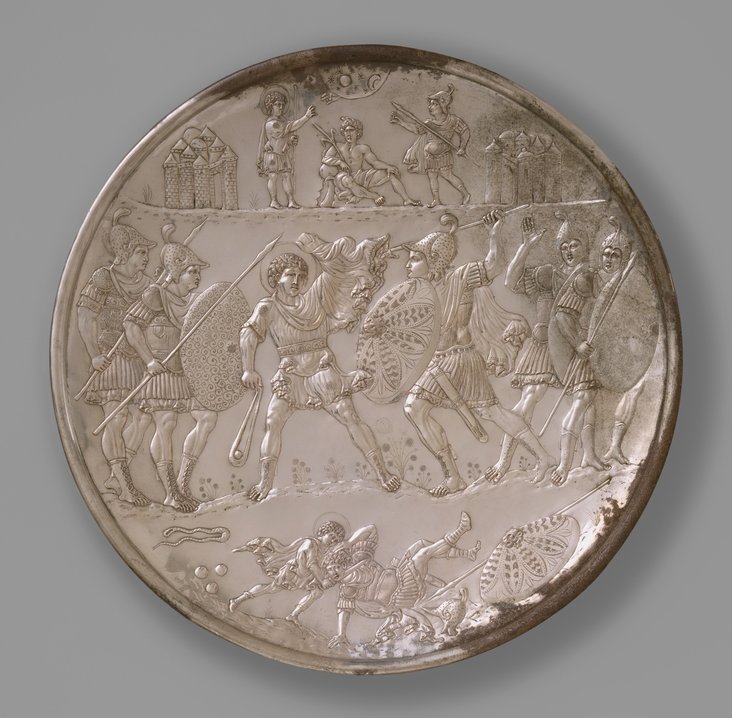 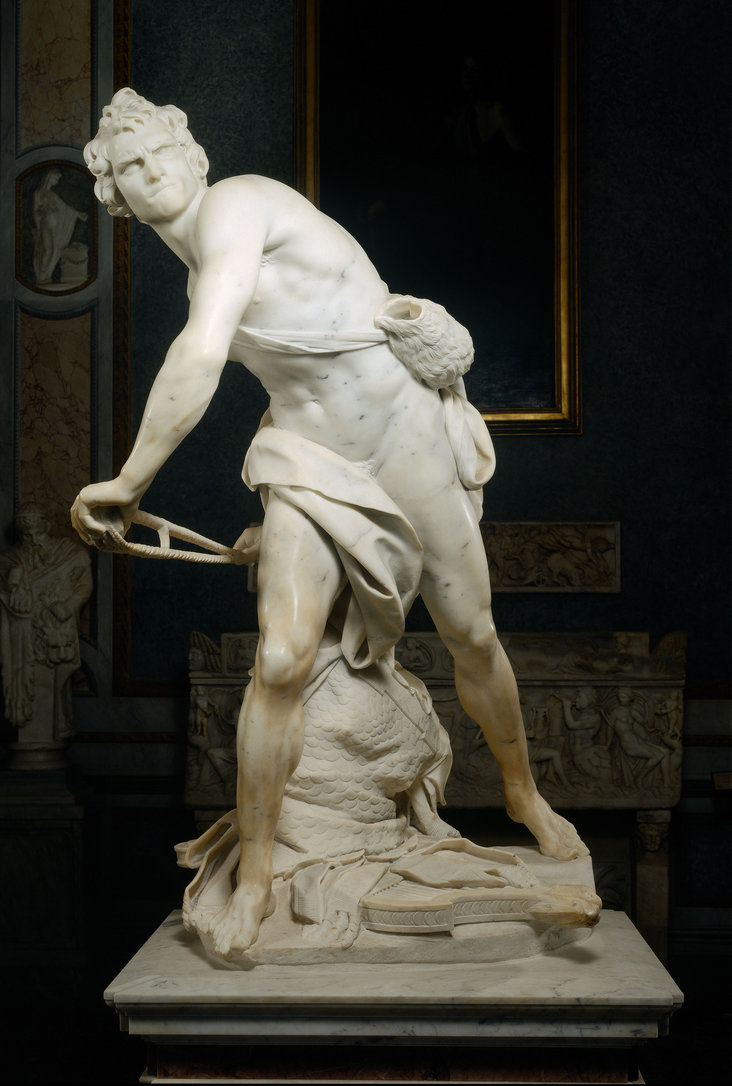 17 Now the Philistines gathered their armies for battle; and they were gathered at Socoh, which belongs to Judah, and encamped between Socoh and Azeʹkah, in Eʹphes-damʹmim. 2And Saul and the men of Israel were gathered, and encamped in the valley of Elah, and drew up in line of battle against the Philistines. 3And the Philistines stood on the mountain on the one side, and Israel stood on the mountain on the other side, with a valley between them. 4And there came out from the camp of the Philistines a champion named Goliath, of Gath, whose height was six cubits and a span. 5He had a helmet of bronze on his head, and he was armed with a coat of mail, and the weight of the coat was five thousand shekels of bronze. 6And he had greaves of bronze upon his legs, and a javelin of bronze slung between his shoulders. 7And the shaft of his spear was like a weaver’s beam, and his spear’s head weighed six hundred shekels of iron; and his shield-bearer went before him. 8He stood and shouted to the ranks of Israel, “Why have you come out to draw up for battle? Am I not a Philistine, and are you not servants of Saul? Choose a man for yourselves, and let him come down to me. 9If he is able to fight with me and kill me, then we will be your servants; but if I prevail against him and kill him, then you shall be our servants and serve us.” 10And the Philistine said, “I defy the ranks of Israel this day; give me a man, that we may fight together.” 11When Saul and all Israel heard these words of the Philistine, they were dismayed and greatly afraid.

12 Now David was the son of an Ephʹrathite of Bethlehem in Judah, named Jesse, who had eight sons. In the days of Saul the man was already old and advanced in years. 13The three eldest sons of Jesse had followed Saul to the battle; and the names of his three sons who went to the battle were Eliʹab the first-born, and next to him Abinʹadab, and the third Shammah. 14David was the youngest; the three eldest followed Saul, 15but David went back and forth from Saul to feed his father’s sheep at Bethlehem. 16For forty days the Philistine came forward and took his stand, morning and evening.

17 And Jesse said to David his son, “Take for your brothers an ephah of this parched grain, and these ten loaves, and carry them quickly to the camp to your brothers; 18also take these ten cheeses to the commander of their thousand. See how your brothers fare, and bring some token from them.”

19 Now Saul, and they, and all the men of Israel, were in the valley of Elah, fighting with the Philistines. 20And David rose early in the morning, and left the sheep with a keeper, and took the provisions, and went, as Jesse had commanded him; and he came to the encampment as the host was going forth to the battle line, shouting the war cry. 21And Israel and the Philistines drew up for battle, army against army. 22And David left the things in charge of the keeper of the baggage, and ran to the ranks, and went and greeted his brothers. 23As he talked with them, behold, the champion, the Philistine of Gath, Goliath by name, came up out of the ranks of the Philistines, and spoke the same words as before. And David heard him.

24 All the men of Israel, when they saw the man, fled from him, and were much afraid. 25And the men of Israel said, “Have you seen this man who has come up? Surely he has come up to defy Israel; and the man who kills him, the king will enrich with great riches, and will give him his daughter, and make his father’s house free in Israel.” 26And David said to the men who stood by him, “What shall be done for the man who kills this Philistine, and takes away the reproach from Israel? For who is this uncircumcised Philistine, that he should defy the armies of the living God?” 27And the people answered him in the same way, “So shall it be done to the man who kills him.”

28 Now Eliʹab his eldest brother heard when he spoke to the men; and Eliʹab’s anger was kindled against David, and he said, “Why have you come down? And with whom have you left those few sheep in the wilderness? I know your presumption, and the evil of your heart; for you have come down to see the battle.” 29And David said, “What have I done now? Was it not but a word?” 30And he turned away from him toward another, and spoke in the same way; and the people answered him again as before.

31 When the words which David spoke were heard, they repeated them before Saul; and he sent for him. 32And David said to Saul, “Let no man’s heart fail because of him; your servant will go and fight with this Philistine.” 33And Saul said to David, “You are not able to go against this Philistine to fight with him; for you are but a youth, and he has been a man of war from his youth.” 34But David said to Saul, “Your servant used to keep sheep for his father; and when there came a lion, or a bear, and took a lamb from the flock, 35I went after him and smote him and delivered it out of his mouth; and if he arose against me, I caught him by his beard, and smote him and killed him. 36Your servant has killed both lions and bears; and this uncircumcised Philistine shall be like one of them, seeing he has defied the armies of the living God.” 37And David said, “The Lord who delivered me from the paw of the lion and from the paw of the bear, will deliver me from the hand of this Philistine.” And Saul said to David, “Go, and the Lord be with you!” 38Then Saul clothed David with his armor; he put a helmet of bronze on his head, and clothed him with a coat of mail. 39And David girded his sword over his armor, and he tried in vain to go, for he was not used to them. Then David said to Saul, “I cannot go with these; for I am not used to them.” And David put them off. 40Then he took his staff in his hand, and chose five smooth stones from the brook, and put them in his shepherd’s bag or wallet; his sling was in his hand, and he drew near to the Philistine.

41 And the Philistine came on and drew near to David, with his shield-bearer in front of him. 42And when the Philistine looked, and saw David, he disdained him; for he was but a youth, ruddy and comely in appearance. 43And the Philistine said to David, “Am I a dog, that you come to me with sticks?” And the Philistine cursed David by his gods. 44The Philistine said to David, “Come to me, and I will give your flesh to the birds of the air and to the beasts of the field.” 45Then David said to the Philistine, “You come to me with a sword and with a spear and with a javelin; but I come to you in the name of the Lord of hosts, the God of the armies of Israel, whom you have defied. 46This day the Lord will deliver you into my hand, and I will strike you down, and cut off your head; and I will give the dead bodies of the host of the Philistines this day to the birds of the air and to the wild beasts of the earth; that all the earth may know that there is a God in Israel, 47and that all this assembly may know that the Lord saves not with sword and spear; for the battle is the Lord’s and he will give you into our hand.”

48 When the Philistine arose and came and drew near to meet David, David ran quickly toward the battle line to meet the Philistine. 49And David put his hand in his bag and took out a stone, and slung it, and struck the Philistine on his forehead; the stone sank into his forehead, and he fell on his face to the ground.

55 When Saul saw David go forth against the Philistine, he said to Abner, the commander of the army, “Abner, whose son is this youth?” And Abner said, “As your soul lives, O king, I cannot tell.” 56And the king said, “Inquire whose son the stripling is.” 57And as David returned from the slaughter of the Philistine, Abner took him, and brought him before Saul with the head of the Philistine in his hand. 58And Saul said to him, “Whose son are you, young man?” And David answered, “I am the son of your servant Jesse the Bethlehemite.”