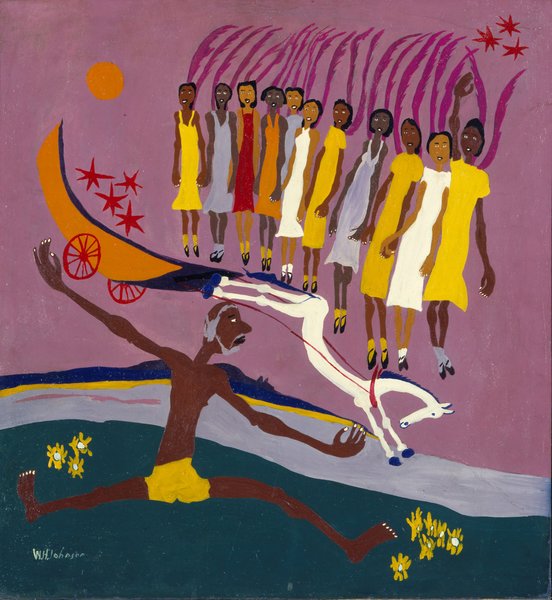 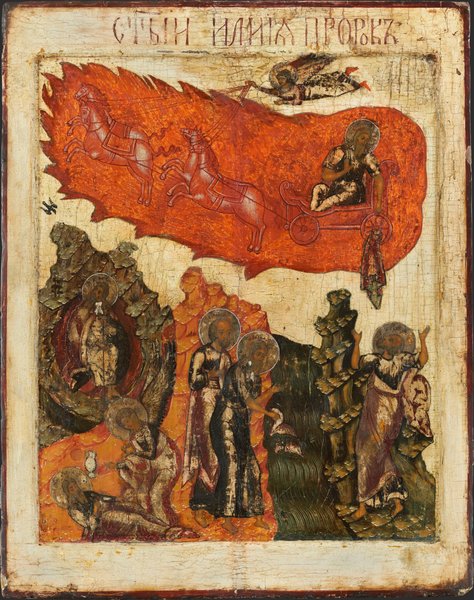 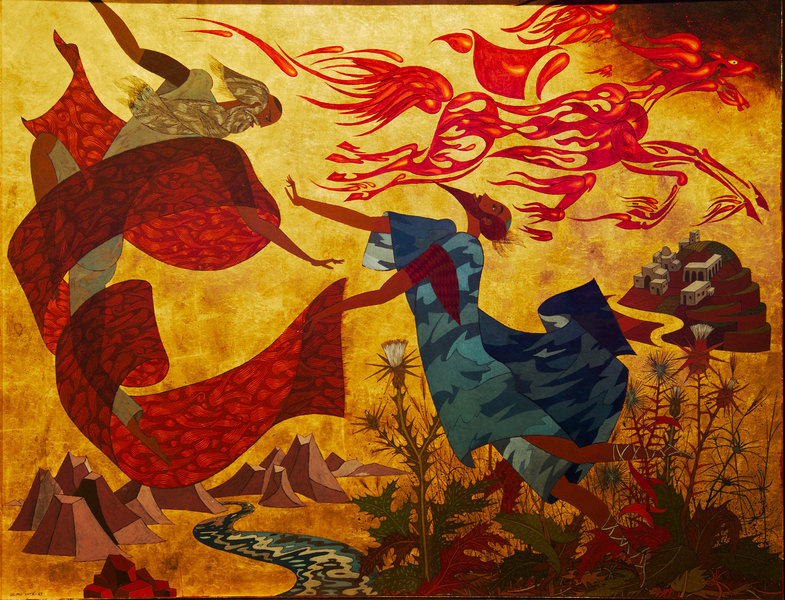 The consummate event of Elijah’s life, in which he’s taken up by a whirlwind into heaven, is one of great drama, well suited to visual depiction. The biblical writer describes the exit vehicle as ‘a chariot of fire and horses of fire’ (2 Kings 2:11)—a wild, dreamlike image that can be interpreted in a number of imaginative ways.

Early Christian catacomb paintings and sarcophagi from Rome show a regal Elijah standing at the reins inside a classical quadriga (a chariot drawn by four horses abreast), an iconography indebted to the ancient Greek vases and bas-reliefs that show the sun-god Helios riding his bright chariot from east to west through the sky. No fire element is visible in these Late Antique images of Elijah’s ascent, but fire would become a key feature of paintings of the subject during the late Middle Ages in the West, and of icons in the East.

In his inclusion of a large fiery aureole, our seventeenth-century Russian icon writer follows an iconographic tradition that dates back to the fourteenth century (Cormack 2007: 136), showing Elijah careening through an explosive burst of flame, the red taking up nearly half the composition. The horses blend in, as they appear to be made of fire themselves, and they are driven by an angel who flies overhead, while Elijah stays seated in the carriage.

Painted in his characteristic folk style in 1944—during a time of racial segregation and violence—the vehicle in African American artist William H. Johnson’s Swing Low, Sweet Chariot is more humble: a rough-and-tumble chariot pulled by a single white horse—but with a hint of the mystical in the red stars suspended just above its frame.

Also from the twentieth century, Elijah Went Up by a Whirlwind into Heaven by Polish-born Israeli artist Shlomo Katz has a decidedly Asian flair that is especially pronounced in the ‘chariot’, which is not a chariot at all but, rather, a pair of mythical horse-like creatures seeming almost ready to dissipate. Their appearance is reminiscent of a Chinese dragon (in addition to the acknowledged influence of traditional Persian, Turkish, and Indian painting on his work, the art of China may also have come into play in this painting). Swept up by the rush, Elijah follows the creatures’ trail.

Space is composed differently in these three artworks, taking the eyes along different paths. The icon gives more narrative context for Elijah’s ascent, depicting key episodes from his life story in serial fashion within one frame. The chronological progression meanders in a sort of zigzag pattern, ending at the top left. Johnson’s painting is arranged along a diagonal line that rises from the bottom left to top right. Katz’s guides our eyes in an upward swoosh.

Both Katz’s painting and the icon were made for sacred use but in different religious traditions. The icon is now in a museum, but it would have originally been used by Russian Orthodox Christians in church or in private devotions, for veneration. Katz’s painting was commissioned for, and still hangs in, a Jewish chapel for U.S. Air Force cadets in Colorado; it is one of nine biblical paintings that adorn the walls, helping to connect worshippers to their sacred history and reflecting the beauty of God. Both have—or had—backgrounds of gold leaf. (The icon’s gold has flaked off over time.)

Swing Low, Sweet Chariot is influenced by the black Protestant church tradition, where the African American spiritual from which the painting takes its name is kept alive. The slave song is based on 2 Kings 2, interpreting Elijah’s sky-flight over the Jordan River as a metaphor for death. So the main figure in Johnson’s painting could be Elijah, or he could be a slave or a sharecropper or any man on his deathbed, whom the magenta-winged angels, a choir of black women, beckon across the divide. Conspicuously, there is no Elisha; that’s because the emphasis is on the individual’s homegoing.

Glorious death—or rather, translation into heaven—is one aspect of our select passage; the transmission of power is another. Elijah’s mantle was a sign of his prophetic office, so his handing it over to Elisha signifies Elisha succeeding him in that role. In a larger sense it signifies God giving his people what they need to accomplish his will. On the lateral faces of sarcophagi the scene was often paired with Moses receiving the tablets of the law, and in Biblia pauperum it was related typologically to the ascension of Christ, with the implicit association of the giving of the Holy Spirit to the disciples at Pentecost.

Elijah’s departure, therefore, pictures not only the anticipated future of the saints, who will be gathered up to God, but also the conveyance of authority and mission to be exercised here and now.

2 Now when the Lord was about to take Eliʹjah up to heaven by a whirlwind, Eliʹjah and Eliʹsha were on their way from Gilgal. 2And Eliʹjah said to Eliʹsha, “Tarry here, I pray you; for the Lord has sent me as far as Bethel.” But Eliʹsha said, “As the Lord lives, and as you yourself live, I will not leave you.” So they went down to Bethel. 3And the sons of the prophets who were in Bethel came out to Eliʹsha, and said to him, “Do you know that today the Lord will take away your master from over you?” And he said, “Yes, I know it; hold your peace.”

4 Eliʹjah said to him, “Eliʹsha, tarry here, I pray you; for the Lord has sent me to Jericho.” But he said, “As the Lord lives, and as you yourself live, I will not leave you.” So they came to Jericho. 5The sons of the prophets who were at Jericho drew near to Eliʹsha, and said to him, “Do you know that today the Lord will take away your master from over you?” And he answered, “Yes, I know it; hold your peace.”

6 Then Eliʹjah said to him, “Tarry here, I pray you; for the Lord has sent me to the Jordan.” But he said, “As the Lord lives, and as you yourself live, I will not leave you.” So the two of them went on. 7Fifty men of the sons of the prophets also went, and stood at some distance from them, as they both were standing by the Jordan. 8Then Eliʹjah took his mantle, and rolled it up, and struck the water, and the water was parted to the one side and to the other, till the two of them could go over on dry ground.

9 When they had crossed, Eliʹjah said to Eliʹsha, “Ask what I shall do for you, before I am taken from you.” And Eliʹsha said, “I pray you, let me inherit a double share of your spirit.” 10And he said, “You have asked a hard thing; yet, if you see me as I am being taken from you, it shall be so for you; but if you do not see me, it shall not be so.” 11And as they still went on and talked, behold, a chariot of fire and horses of fire separated the two of them. And Eliʹjah went up by a whirlwind into heaven. 12And Eliʹsha saw it and he cried, “My father, my father! the chariots of Israel and its horsemen!” And he saw him no more.