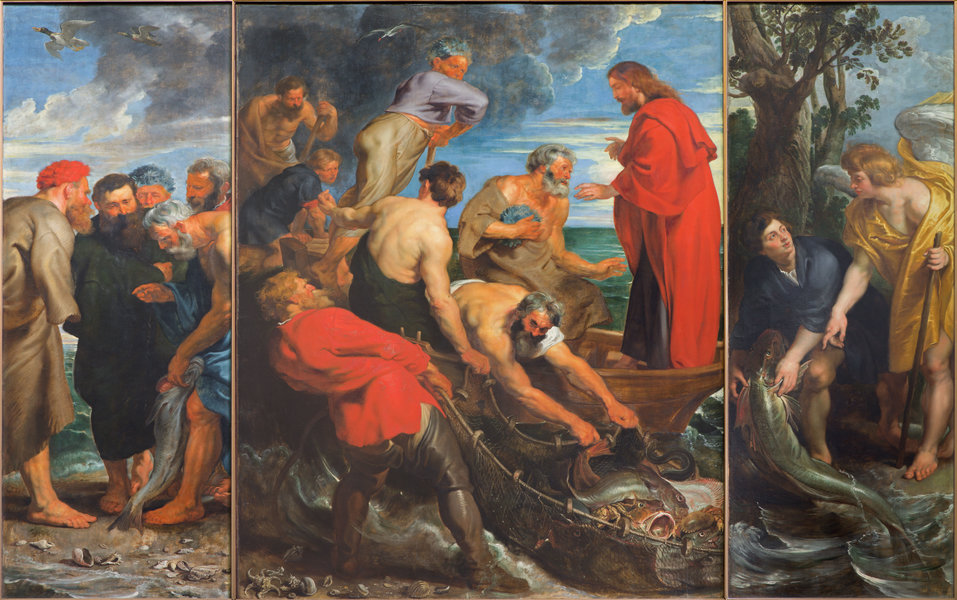 The fishmonger guilds of the city of Mechelen in Belgium commissioned Peter Paul Rubens to paint this altarpiece triptych for their chapel in the Church of Our Lady-across-the-Dyle. The triptych is one of the few works by the artist still in situ and, from atop its altar, towers over the viewer (who will often approach it as a communicant at Mass).

The choice of this biblical scene by the Mechelen fishermen’s guild has been interpreted as a tribute to their devotion to the Roman Catholic faith at a time when many Flemish fishermen emigrated to the Protestant north. Early documents suggest that members of the guild were portrayed by Rubens as the fishermen-disciples, conceivably enhancing their identification with Christ's first followers and especially their patron saints, Peter and Andrew.

In this light, Rubens composed an image that gives prominence to the fishermen in action, locating Simon Peter kneeling before Christ just right of centre. Dynamic diagonal lines structure the whole composition, enlivened by touches of strong and contrasting colours. The red cloak of Christ is echoed in the red jacket of the man pulling up the net from the shore. On the opposite axis, from upper left to lower right, the bare-torsoed fishermen in their drably-coloured clothes form a second diagonal that plunges towards the sea. Above them, a threatening sky is reflected in the silvery waves from which big gleaming fishes emerge. This asymmetrical, albeit masterfully balanced, composition focuses on the contrasting elements and wild nature which the fishermen attempt to tame in their struggle for survival. Simon Peter and Christ appear therefore almost like a vision, estranged from this marine combat.

The central panel of the Draught of Fishes is flanked by two painted hinged wings which depict Peter and the Tribute Money on the left (Matthew 17:24–27), and Tobias and the Angel on the right (Tobit 6:1–12). They illustrate two further ‘miraculous catches’ of fish: Peter catches a fish which contains in its mouth the coin to pay a tax collector’s levy; Tobias, following the angel’s instructions, catches a fish that will cure Sarah’s curse. These complementary scenes can be construed as two further acts of obedience and submission which help human beings to move forward on the path of life.

Lawrence, Cynthia. 1984. ‘The Iconology of Rubens's “Miraculous Draft of Fishes”’, Simiolus: Netherlands Quarterly for the History of Art, 14.1: 24–35 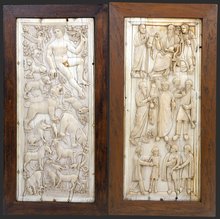 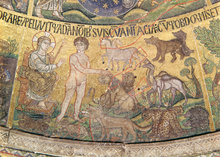