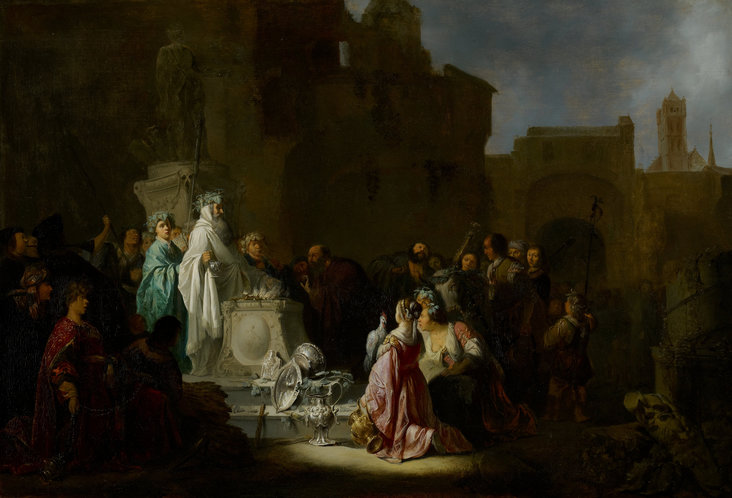 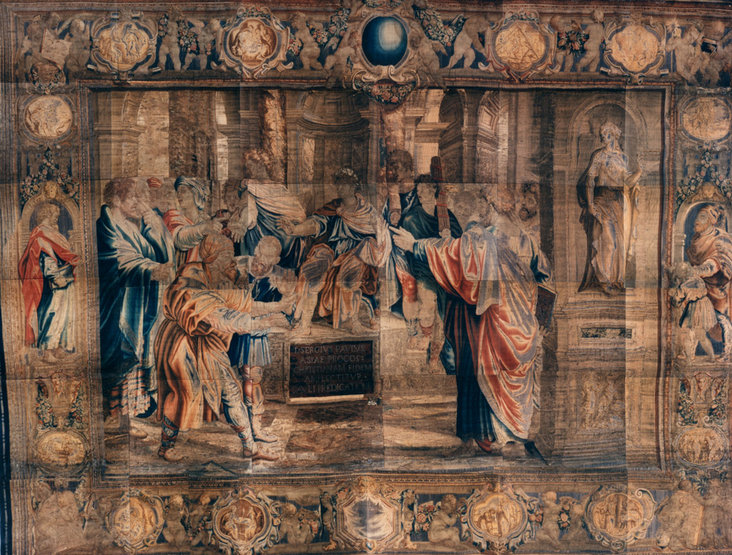 Works of art by Willem de Poorter, Ambrosius Francken I, and Unknown English after Raphael
Commentaries by Andrew Davison

13Now in the church at Antioch there were prophets and teachers, Barnabas, Simeon who was called Niger, Lucius of Cyreʹne, Manʹa-en a member of the court of Herod the tetrarch, and Saul. 2While they were worshiping the Lord and fasting, the Holy Spirit said, “Set apart for me Barnabas and Saul for the work to which I have called them.” 3Then after fasting and praying they laid their hands on them and sent them off.

4 So, being sent out by the Holy Spirit, they went down to Seleuʹcia; and from there they sailed to Cyprus. 5When they arrived at Salʹamis, they proclaimed the word of God in the synagogues of the Jews. And they had John to assist them. 6When they had gone through the whole island as far as Paphos, they came upon a certain magician, a Jewish false prophet, named Bar-Jesus. 7He was with the proconsul, Sergius Paulus, a man of intelligence, who summoned Barnabas and Saul and sought to hear the word of God. 8But Elʹymas the magician (for that is the meaning of his name) withstood them, seeking to turn away the proconsul from the faith. 9But Saul, who is also called Paul, filled with the Holy Spirit, looked intently at him 10and said, “You son of the devil, you enemy of all righteousness, full of all deceit and villainy, will you not stop making crooked the straight paths of the Lord? 11And now, behold, the hand of the Lord is upon you, and you shall be blind and unable to see the sun for a time.” Immediately mist and darkness fell upon him and he went about seeking people to lead him by the hand. 12Then the proconsul believed, when he saw what had occurred, for he was astonished at the teaching of the Lord.

13 Now Paul and his company set sail from Paphos, and came to Perga in Pamphylʹia. And John left them and returned to Jerusalem; 14but they passed on from Perga and came to Antioch of Pisidʹia. And on the sabbath day they went into the synagogue and sat down. 15After the reading of the law and the prophets, the rulers of the synagogue sent to them, saying, “Brethren, if you have any word of exhortation for the people, say it.” 16So Paul stood up, and motioning with his hand said:

“Men of Israel, and you that fear God, listen. 17The God of this people Israel chose our fathers and made the people great during their stay in the land of Egypt, and with uplifted arm he led them out of it. 18And for about forty years he bore with them in the wilderness. 19And when he had destroyed seven nations in the land of Canaan, he gave them their land as an inheritance, for about four hundred and fifty years. 20And after that he gave them judges until Samuel the prophet. 21Then they asked for a king; and God gave them Saul the son of Kish, a man of the tribe of Benjamin, for forty years. 22And when he had removed him, he raised up David to be their king; of whom he testified and said, ‘I have found in David the son of Jesse a man after my heart, who will do all my will.’ 23Of this man’s posterity God has brought to Israel a Savior, Jesus, as he promised. 24Before his coming John had preached a baptism of repentance to all the people of Israel. 25And as John was finishing his course, he said, ‘What do you suppose that I am? I am not he. No, but after me one is coming, the sandals of whose feet I am not worthy to untie.’

26 “Brethren, sons of the family of Abraham, and those among you that fear God, to us has been sent the message of this salvation. 27For those who live in Jerusalem and their rulers, because they did not recognize him nor understand the utterances of the prophets which are read every sabbath, fulfilled these by condemning him. 28Though they could charge him with nothing deserving death, yet they asked Pilate to have him killed. 29And when they had fulfilled all that was written of him, they took him down from the tree, and laid him in a tomb. 30But God raised him from the dead; 31and for many days he appeared to those who came up with him from Galilee to Jerusalem, who are now his witnesses to the people. 32And we bring you the good news that what God promised to the fathers, 33this he has fulfilled to us their children by raising Jesus; as also it is written in the second psalm,

‘Thou art my Son,

today I have begotten thee.’

34And as for the fact that he raised him from the dead, no more to return to corruption, he spoke in this way,

‘I will give you the holy and sure blessings of David.’

35Therefore he says also in another psalm,

‘Thou wilt not let thy Holy One see corruption.’

36For David, after he had served the counsel of God in his own generation, fell asleep, and was laid with his fathers, and saw corruption; 37but he whom God raised up saw no corruption. 38Let it be known to you therefore, brethren, that through this man forgiveness of sins is proclaimed to you, 39and by him every one that believes is freed from everything from which you could not be freed by the law of Moses. 40Beware, therefore, lest there come upon you what is said in the prophets:

41‘Behold, you scoffers, and wonder, and perish;

for I do a deed in your days,

a deed you will never believe, if one declares it to you.’ ”

42 As they went out, the people begged that these things might be told them the next sabbath. 43And when the meeting of the synagogue broke up, many Jews and devout converts to Judaism followed Paul and Barnabas, who spoke to them and urged them to continue in the grace of God.

44 The next sabbath almost the whole city gathered together to hear the word of God. 45But when the Jews saw the multitudes, they were filled with jealousy, and contradicted what was spoken by Paul, and reviled him. 46And Paul and Barnabas spoke out boldly, saying, “It was necessary that the word of God should be spoken first to you. Since you thrust it from you, and judge yourselves unworthy of eternal life, behold, we turn to the Gentiles. 47For so the Lord has commanded us, saying,

‘I have set you to be a light for the Gentiles,

that you may bring salvation to the uttermost parts of the earth.’ ”

48 And when the Gentiles heard this, they were glad and glorified the word of God; and as many as were ordained to eternal life believed. 49And the word of the Lord spread throughout all the region. 50But the Jews incited the devout women of high standing and the leading men of the city, and stirred up persecution against Paul and Barnabas, and drove them out of their district. 51But they shook off the dust from their feet against them, and went to Icoʹnium. 52And the disciples were filled with joy and with the Holy Spirit.

14 Now at Icoʹnium they entered together into the Jewish synagogue, and so spoke that a great company believed, both of Jews and of Greeks. 2But the unbelieving Jews stirred up the Gentiles and poisoned their minds against the brethren. 3So they remained for a long time, speaking boldly for the Lord, who bore witness to the word of his grace, granting signs and wonders to be done by their hands. 4But the people of the city were divided; some sided with the Jews, and some with the apostles. 5When an attempt was made by both Gentiles and Jews, with their rulers, to molest them and to stone them, 6they learned of it and fled to Lystra and Derbe, cities of Lycaoʹnia, and to the surrounding country; 7and there they preached the gospel.

8 Now at Lystra there was a man sitting, who could not use his feet; he was a cripple from birth, who had never walked. 9He listened to Paul speaking; and Paul, looking intently at him and seeing that he had faith to be made well, 10said in a loud voice, “Stand upright on your feet.” And he sprang up and walked. 11And when the crowds saw what Paul had done, they lifted up their voices, saying in Lycaoʹnian, “The gods have come down to us in the likeness of men!” 12Barnabas they called Zeus, and Paul, because he was the chief speaker, they called Hermes. 13And the priest of Zeus, whose temple was in front of the city, brought oxen and garlands to the gates and wanted to offer sacrifice with the people. 14But when the apostles Barnabas and Paul heard of it, they tore their garments and rushed out among the multitude, crying, 15“Men, why are you doing this? We also are men, of like nature with you, and bring you good news, that you should turn from these vain things to a living God who made the heaven and the earth and the sea and all that is in them. 16In past generations he allowed all the nations to walk in their own ways; 17yet he did not leave himself without witness, for he did good and gave you from heaven rains and fruitful seasons, satisfying your hearts with food and gladness.” 18With these words they scarcely restrained the people from offering sacrifice to them.

19 But Jews came there from Antioch and Icoʹnium; and having persuaded the people, they stoned Paul and dragged him out of the city, supposing that he was dead. 20But when the disciples gathered about him, he rose up and entered the city; and on the next day he went on with Barnabas to Derbe. 21When they had preached the gospel to that city and had made many disciples, they returned to Lystra and to Icoʹnium and to Antioch, 22strengthening the souls of the disciples, exhorting them to continue in the faith, and saying that through many tribulations we must enter the kingdom of God. 23And when they had appointed elders for them in every church, with prayer and fasting, they committed them to the Lord in whom they believed.

24 Then they passed through Pisidʹia, and came to Pamphylʹia. 25And when they had spoken the word in Perga, they went down to Attaliʹa; 26and from there they sailed to Antioch, where they had been commended to the grace of God for the work which they had fulfilled. 27And when they arrived, they gathered the church together and declared all that God had done with them, and how he had opened a door of faith to the Gentiles. 28And they remained no little time with the disciples.