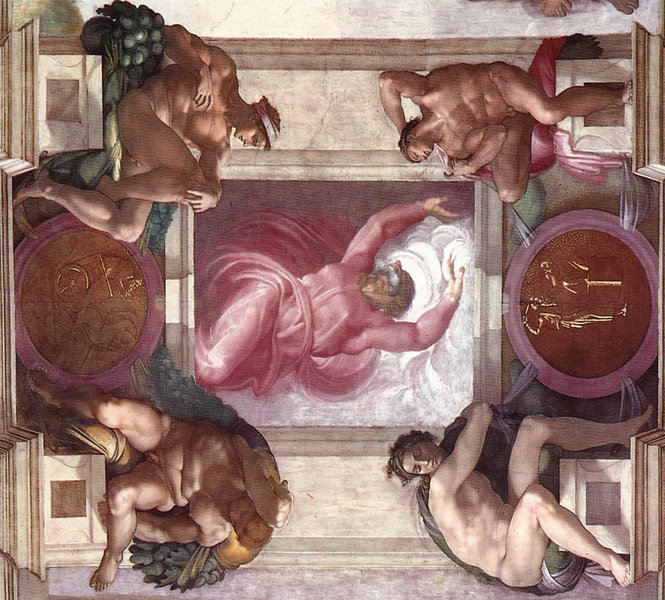 Most likely completed in 1512, Michelangelo’s fresco representing the Separation of Light from Darkness is the first of the nine central panels representing the story of Genesis on the Sistine Chapel ceiling. By choosing this scene as the first in the Cycle of Creation, Michelangelo conflates the separation of light from darkness in Genesis 1:4–5 with that of order from chaos in Genesis 1:1–2.

Darkness is shown as a formless void, from which white light, in perfect circles, is being wrested.

In the Bible, God’s announcement, ‘Let there be…’ (Genesis 1:3), seems to invite the world into being with a mere utterance, and Michelangelo inherited a traditional iconography that depicted an all-powerful deity effortlessly at work. Dramatically, the artist has broken from this tradition by portraying a robust figure straining with activity. His rendering of the scene celebrates the luminosity of the ordered world as something strenuously plucked from turbid gloom.

Michelangelo’s great challenge here was to represent an almost unimaginable event with no obvious corresponding physical action. After all, God’s power to create from nothing (ex nihilo) is not imitable by any human creature.

For a skilled artist however, the generation of form, of light, and of darkness is an essential professional skill. It is arguably the primary work of any figurative painter and especially of one who endeavours to create the seen from the unseen, the perceptible from the invisible. God created form out of chaos and summoned light out of darkness. The painter must generate light from pigments to both shape and illuminate a pictorial world. In both cases, the act of creation can be explored as an act of bringing order to the world—of creating a ‘whole’ out of a chaotic mass—and of illuminating that world.

Accordingly, we are asked to imagine Michelangelo’s God-creator as an active, virile ‘painter’. His whole body exerts itself to push the chaos and darkness away.

In representing God the Father in this way, Michelangelo imbues the biblical text and God’s actions with the emotional and physical effort of an earthly artist like himself.