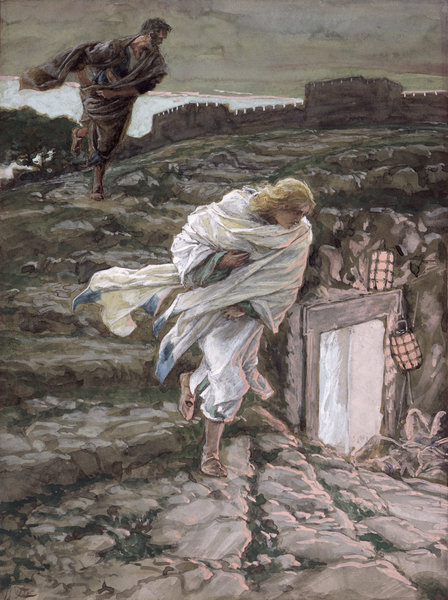 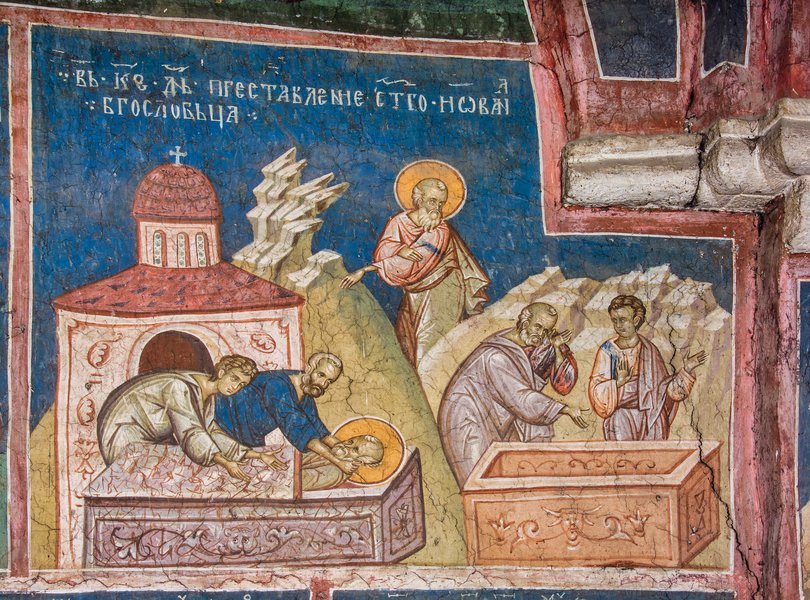 St John the Theologian, the Feast Day of 26 September, The Calendar cycle (or Menologion cycle), 1343–48, Fresco, Narthex of the katholikon of the Dečani Monastery, Kosovo, Courtesy of BLAGO Fund, www.blagofund.org

The beloved disciple has bequeathed a powerful legacy to posterity. Of all the books that have or could be written about Jesus (see John 21:25), the Fourth Gospel has been the favourite of many Christians across the centuries. What the second-century theologian Clement of Alexandria called ‘the spiritual Gospel’ or ‘the mystical Gospel’ continues to speak powerfully through its rich symbols, dramatic scenes, and profound dialogues. As the editors of the Gospel’s final version put it, ‘we know that his testimony is true’ (21:24).

But what is the content of that testimony? Plautilla Nelli goes back to that moment of intimacy between Jesus and the disciple he loved, reclining together at the Last Supper. A widespread medieval tradition focussed on this embrace, affirming that the truth about Jesus was revealed to John as he lay on the Lord’s breast and questioned him, and that that insight enabled him to testify to the Word made flesh with his characteristic depth and narrative skill.

The beloved disciple’s testimony would have spoken volumes to Suor Plautilla and her religious sisters, who sought to cultivate the same contemplative intimacy with Christ. The Gospel of John uses a horticultural image to describe that mutual relationship of ‘abiding’: ‘I am the vine, you are the branches. He who abides in me, and I in him, he it is that bears much fruit, for apart from me you can do nothing’ (John 15:5). It may not be coincidental, therefore, that the porcelain on Plautilla’s supper table is decorated with a vine motif (Nelson ed. 2008: 78–79). She and her sisters were striving to abide in Christ, as he abided in them.

James Tissot’s watercolour suggests that the key to this luminous Gospel lies in the revelatory moment at the tomb, where the beloved disciple saw the grave clothes and believed (John 20:8). Tissot depicts John as already illuminated by the divine glory as he approaches the sepulchre (see John 1:1–18). John’s witness—his ability to see beyond the signs of Christ’s life and death to the ‘eternal life’ they convey—has been passed on to subsequent generations in a vivid written narrative. Paradoxically, despite his unexpected death and departure from this world, he ‘remains’ in the Gospel book he has bequeathed to posterity.

For those responsible for the Dečani Monastery frescoes, Jesus’s ambivalence about the beloved disciple’s death is reflected in the image of an aged John, the sole remaining member of the Twelve. Yet John’s story is no solitary narrative. The ending of the Gospel presupposes, not a single Gospel writer, but the witness of a community: ‘we know that his testimony is true’ (21:24b); ‘I suppose that the world itself could not contain the books that would be written’ (21:25).

In concrete terms, John’s trustworthy testimony is now bequeathed to his community of disciples. Hence the Byzantine fresco depicts a communal experience. To the left, behind the tomb of John, stands a church, a symbol of the congregation of believers at Ephesus. John is laid in his grave by a pair of Ephesian Christians, the younger of the two probably Prochorus (Acts 6:5), John’s companion and scribe in Byzantine tradition. To the right, Prochorus and an elder discover the tomb empty. In the background, John is visible to the viewer, though not apparently to his first century companions. With his left hand, he gestures us towards the church building. The community, the church, must now take up his mantle as he departs from this world. The testimony that he gave must now be incarnated in concrete human lives.

The testimony of the beloved disciple, then, is multifaceted. For Suor Plautilla Nelli, it springs from an intimate moment at table, when John knew the experience of divine love. Hearing that testimony, others too can know what it means to be disciples whom Jesus loves. James Tissot’s luminous John at the tomb is a reminder that this disciple’s testimony remains for us in written form. John’s Gospel presents a narrative of Christ’s life suffused from beginning to end with resurrection light. In the Dečani Monastery fresco, the testimony is passed on like a baton to those who will follow. That it is particularly lived out in liturgical worship is suggested, not only by the presence of the ecclesiastical building, but by the location of this fresco within the monastic church.

A human life transformed by intimacy with Jesus; a Gospel book; a communal experience. In these ways, and more, the testimony abides until Christ comes.

Culpepper, R. Alan. 2000. John the Son of Zebedee, the Life of a Legend (Minneapolis: Fortress)

Next exhibition: Acts of the Apostles 1:6–11