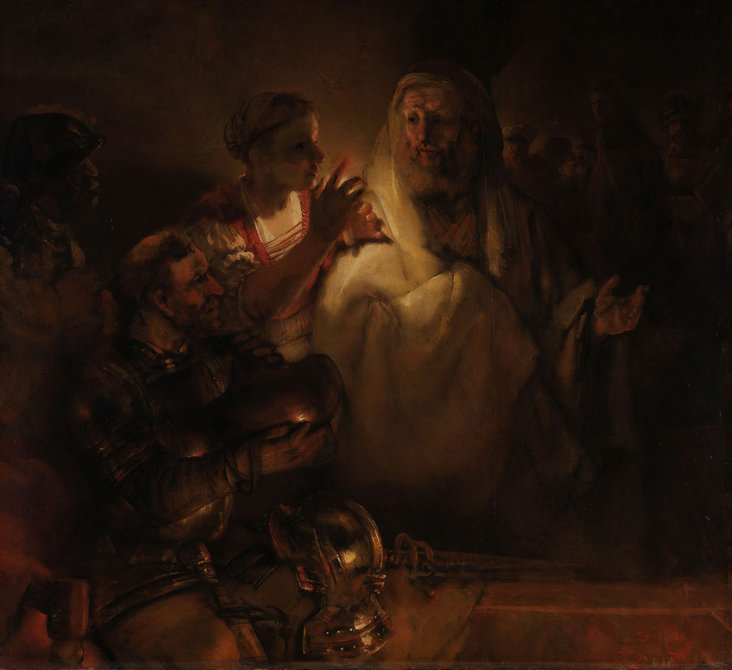 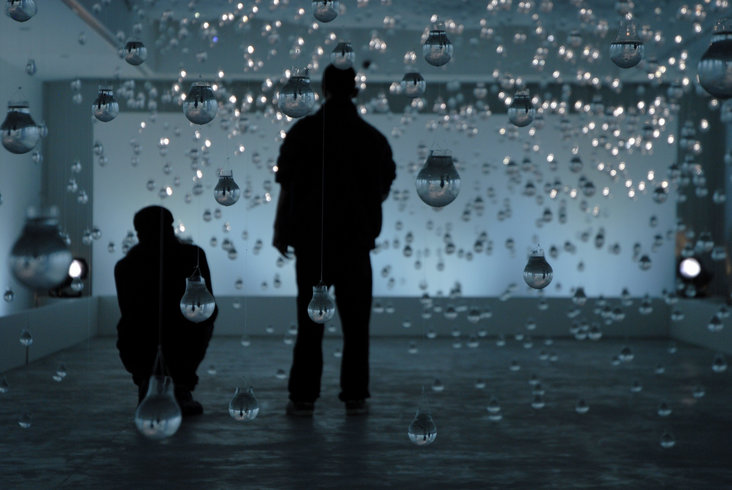 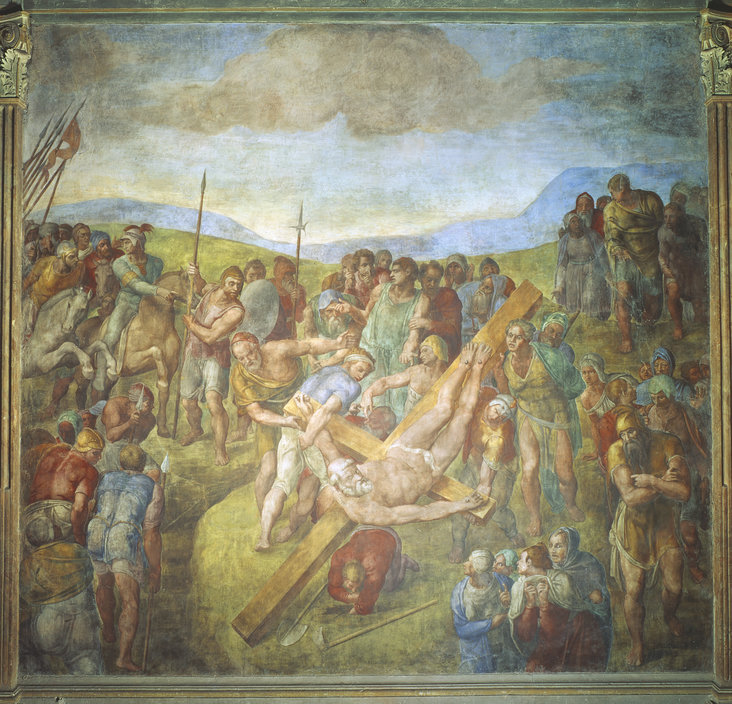 69 Now Peter was sitting outside in the courtyard. And a maid came up to him, and said, “You also were with Jesus the Galilean.” 70But he denied it before them all, saying, “I do not know what you mean.” 71And when he went out to the porch, another maid saw him, and she said to the bystanders, “This man was with Jesus of Nazareth.” 72And again he denied it with an oath, “I do not know the man.” 73After a little while the bystanders came up and said to Peter, “Certainly you are also one of them, for your accent betrays you.” 74Then he began to invoke a curse on himself and to swear, “I do not know the man.” And immediately the cock crowed. 75And Peter remembered the saying of Jesus, “Before the cock crows, you will deny me three times.” And he went out and wept bitterly.

66 And as Peter was below in the courtyard, one of the maids of the high priest came; 67and seeing Peter warming himself, she looked at him, and said, “You also were with the Nazarene, Jesus.” 68But he denied it, saying, “I neither know nor understand what you mean.” And he went out into the gateway. 69And the maid saw him, and began again to say to the bystanders, “This man is one of them.” 70But again he denied it. And after a little while again the bystanders said to Peter, “Certainly you are one of them; for you are a Galilean.” 71But he began to invoke a curse on himself and to swear, “I do not know this man of whom you speak.” 72And immediately the cock crowed a second time. And Peter remembered how Jesus had said to him, “Before the cock crows twice, you will deny me three times.” And he broke down and wept.

54 Then they seized him and led him away, bringing him into the high priest’s house. Peter followed at a distance; 55and when they had kindled a fire in the middle of the courtyard and sat down together, Peter sat among them. 56Then a maid, seeing him as he sat in the light and gazing at him, said, “This man also was with him.” 57But he denied it, saying, “Woman, I do not know him.” 58And a little later some one else saw him and said, “You also are one of them.” But Peter said, “Man, I am not.” 59And after an interval of about an hour still another insisted, saying, “Certainly this man also was with him; for he is a Galilean.” 60But Peter said, “Man, I do not know what you are saying.” And immediately, while he was still speaking, the cock crowed. 61And the Lord turned and looked at Peter. And Peter remembered the word of the Lord, how he had said to him, “Before the cock crows today, you will deny me three times.” 62And he went out and wept bitterly.

15 Simon Peter followed Jesus, and so did another disciple. As this disciple was known to the high priest, he entered the court of the high priest along with Jesus, 16while Peter stood outside at the door. So the other disciple, who was known to the high priest, went out and spoke to the maid who kept the door, and brought Peter in. 17The maid who kept the door said to Peter, “Are not you also one of this man’s disciples?” He said, “I am not.” 18Now the servants and officers had made a charcoal fire, because it was cold, and they were standing and warming themselves; Peter also was with them, standing and warming himself.

25 Now Simon Peter was standing and warming himself. They said to him, “Are not you also one of his disciples?” He denied it and said, “I am not.” 26One of the servants of the high priest, a kinsman of the man whose ear Peter had cut off, asked, “Did I not see you in the garden with him?” 27Peter again denied it; and at once the cock crowed.