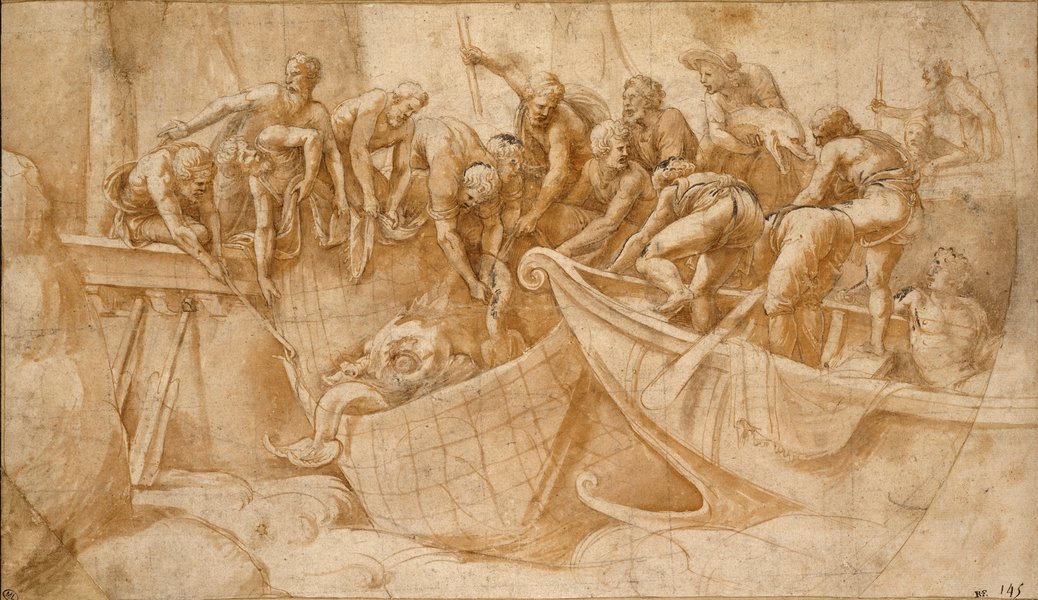 Giulio Romano made this small preparatory drawing for one of sixteen medallions in the Sala dei Venti (Room of the Winds) in the Palazzo Te in Mantua. The medallions themselves were painted by his large team of collaborators, and represent human activities governed by the signs of the zodiac. This one depicts a group of men straining under the weight of a whale that has been caught up in their nets.

Drawing from two late antique astrological texts, the Mathesis of Firmicus Maternus and the Astronomica of Manilius, the room’s decorative scheme illustrates the influence of the stars on human activities. Its programme is explained in an inscription painted on the wall: Distat enim quae sydera te excipient (‘There is a difference depending on the stars that look over you’). The whale-fishing scene is located under the zodiacal sign of Pisces and its constellation, the whale, which predestines men born under their influence to become fishermen.

Giulio was a pupil of Raphael who must have studied the master’s large composition of the Acts of the Apostles, The Miraculous Draught of Fishes, when he joined the workshop in about 1516. Ten years on he clearly still recalled his master’s composition, transforming it to represent a completely different subject. Here, his large net appears almost solid, carefully designed with the same shape as the boat hulls in Raphael’s design. The figures, although more numerous than in Raphael, are similarly distributed along these ‘hulls’ while their vigorous gestures in dragging the net exaggerate Raphael’s invention.

Giulio depicts a daily activity as a heroic venture, and fuses together heroes and ordinary men into a single entity striving for survival. Although it may be that Giulio was also responding here to the art of Michelangelo, especially the famous cartoon for the Battle of Cascina (since destroyed), it seems that the small composition (the final fresco is not much bigger than the preparatory drawing) expresses a highly personal vision that is reflected throughout the whole decoration of the Palazzo Te for Federico Gonzaga, the ruler of Mantua.

Giulio’s fusing of the quotidian with the exceptional is just as much a feature of the Lukan episode which was his master’s subject: the daily activity of Simon, Andrew, James, and John recast by Jesus into the ‘holy heroism’ of their vocation as fishers of multitudes.