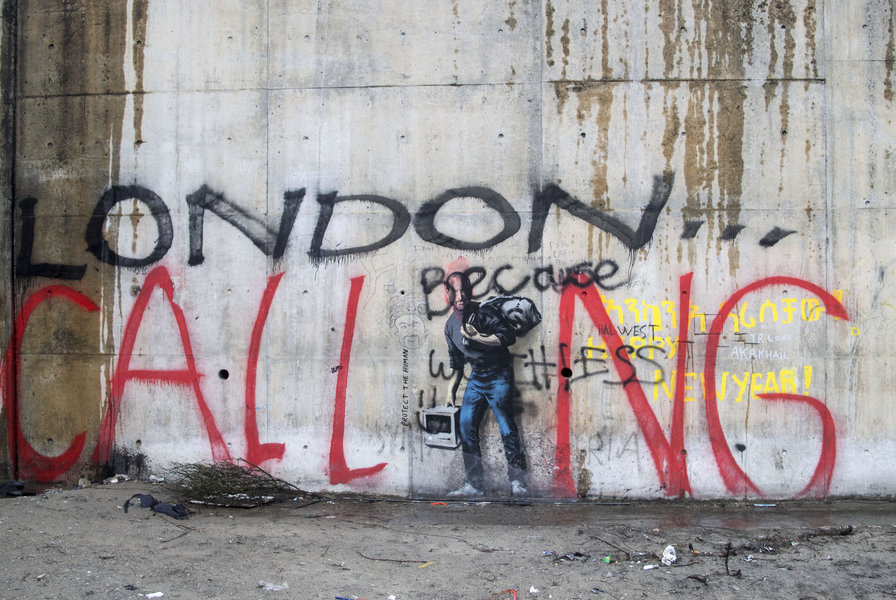 Like the identity of the author of 1 Timothy, the identity of Banksy is disputed and contested. And like the literary corpus attributed to Paul, this work from Banksy is palimpsestuous, having been annotated and overwritten and reinscribed several times over. In its first iteration, it was an image of Steve Jobs, the late founder of Apple, carrying only a knapsack and an early Macintosh computer. Later artists added words to the original artwork. In large letters, ‘London Calling’ quoted the title of an album by British rock band The Clash—itself a quotation from BBC radio broadcasts during World War 2. Here, perhaps, it served as a reference to London as a particular centre of economic wealth and one of the preferred destinations of migrants. And, over the centre of the image, were scrawled the words ‘because worthless’.

This work appeared in 2015, as a humanitarian crisis consumed Europe. Refugees from North Africa, Syria, and elsewhere in the Middle East desperately made their way toward Europe, seeking both political and economic safety. In response, debates exploded across the continent, sometimes centring on economy, sometimes on national, religious, and ethnic identity, and sometimes on the threat of terrorism.

Banksy created this work on a wall in the Calais migrant camp in France, and the meaning seems straightforward. Pointing to Jobs’s own roots as the child of immigrants to the United States, the artist is making the common observation that immigrants contribute much more to our societies than they require in resources. After all, there is a good chance that the device you are reading this on owes something to this son of migrants.

But the ‘because worthless’ of a later anonymous artist provokes a question: what is worth, and where does it come from? The implication of an image of Steve Jobs as a refugee is that refugees’ worth is tied to their utility as economic subjects and objects. Immigration fuels growth, and innovation comes from the mixing of a diversity of cultures. No prophet of postliberalism could disagree. But the later addition, ‘because worthless’, complicates things.

Likewise, this part of 1 Timothy is complicated, and even confused, about what makes human beings worth something. Is it being a docile and obedient slave? Is it contentment with one’s lot in life? Or a life of devotion to God?

Ibrahim, Yasmin, and Anita Howarth. 2018. Calais and its Border Politics: From Control to Demolition (Abingdon and New York: Routledge)

6 Let all who are under the yoke of slavery regard their masters as worthy of all honor, so that the name of God and the teaching may not be defamed. 2Those who have believing masters must not be disrespectful on the ground that they are brethren; rather they must serve all the better since those who benefit by their service are believers and beloved.

Teach and urge these duties. 3If any one teaches otherwise and does not agree with the sound words of our Lord Jesus Christ and the teaching which accords with godliness, 4he is puffed up with conceit, he knows nothing; he has a morbid craving for controversy and for disputes about words, which produce envy, dissension, slander, base suspicions, 5and wrangling among men who are depraved in mind and bereft of the truth, imagining that godliness is a means of gain. 6There is great gain in godliness with contentment; 7for we brought nothing into the world, and we cannot take anything out of the world; 8but if we have food and clothing, with these we shall be content. 9But those who desire to be rich fall into temptation, into a snare, into many senseless and hurtful desires that plunge men into ruin and destruction. 10For the love of money is the root of all evils; it is through this craving that some have wandered away from the faith and pierced their hearts with many pangs.

11 But as for you, man of God, shun all this; aim at righteousness, godliness, faith, love, steadfastness, gentleness. 12Fight the good fight of the faith; take hold of the eternal life to which you were called when you made the good confession in the presence of many witnesses. 13In the presence of God who gives life to all things, and of Christ Jesus who in his testimony before Pontius Pilate made the good confession, 14I charge you to keep the commandment unstained and free from reproach until the appearing of our Lord Jesus Christ; 15and this will be made manifest at the proper time by the blessed and only Sovereign, the King of kings and Lord of lords, 16who alone has immortality and dwells in unapproachable light, whom no man has ever seen or can see. To him be honor and eternal dominion. Amen.

17 As for the rich in this world, charge them not to be haughty, nor to set their hopes on uncertain riches but on God who richly furnishes us with everything to enjoy. 18They are to do good, to be rich in good deeds, liberal and generous, 19thus laying up for themselves a good foundation for the future, so that they may take hold of the life which is life indeed.

20 O Timothy, guard what has been entrusted to you. Avoid the godless chatter and contradictions of what is falsely called knowledge, 21for by professing it some have missed the mark as regards the faith.

Grace be with you.