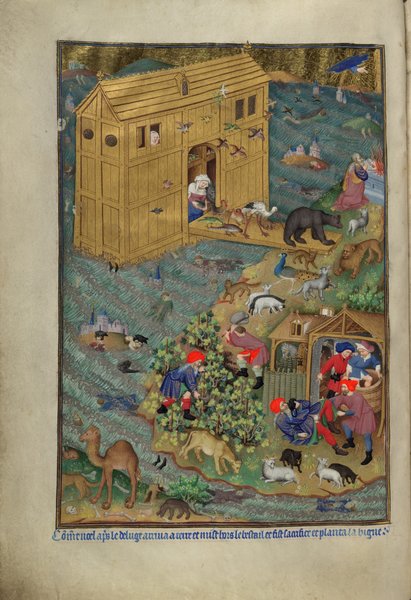 Master of the Munich Golden Legend

A New World in Miniature

On Christmas Eve 1430, Anne of Burgundy, the wife of John, Duke of Bedford, presented this Book of Hours to her nine-year-old nephew Henry VI, who was staying with them at Rouen before his coronation in France. The cycle of full-page miniatures with Genesis scenes in a Book of Hours is unusual and was added in preparation of the gift to the young king.

Noah’s vessel, which resembles a large multi-storey wooden house, appears in the background within the receding waters and stands in stark contrast to the tiny emerging islands topped with minute cities. A multitude of dead bodies are floating around. The animals (most of them are not shown in pairs) emerge from the ark onto a large piece of land to the right.

While Noah appears in the background in prayer before a burning offering that is blessed by the hand of God, his wife remains inside the ark helping the animals to make their exit. The raven which Noah released to look for land and which flew back and forth appears on the small island in the waters towards the left, devouring a dead, bloodstained body. The dove which Noah released three times is shown with the olive branch with which it returned after it was released the second time; it did not return third time round when it found dry land.

Finally, the exit from the ark is combined with Noah’s drunkenness. In the foreground we can see the wine that Noah made and imbibed after the great flood. While one of Noah’s sons squashes the grapes in the tub with his feet, Ham reveals Noah’s disgrace and a third son covers the patriarch’s exposed underwear which alludes to his nakedness.

The explanatory caption in blue ink in the lower margin is written in French rather than in Latin and serves as an educational tool: Comment noel apres le deluge arriva a terre et mist hors le bestail et fist sacrifice et planta la vigne (‘How Noah, after the Flood, arrived on land and put the animals out and made a sacrifice and planted the vine’).

The ark’s gate, now pulled down, has changed from being a barrier to being a bridge—a bridge to an entire new world. The ark-dwellers move from darkness into light: a fitting theme for a Christmas gift. 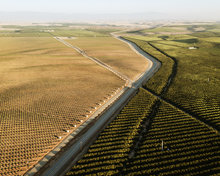