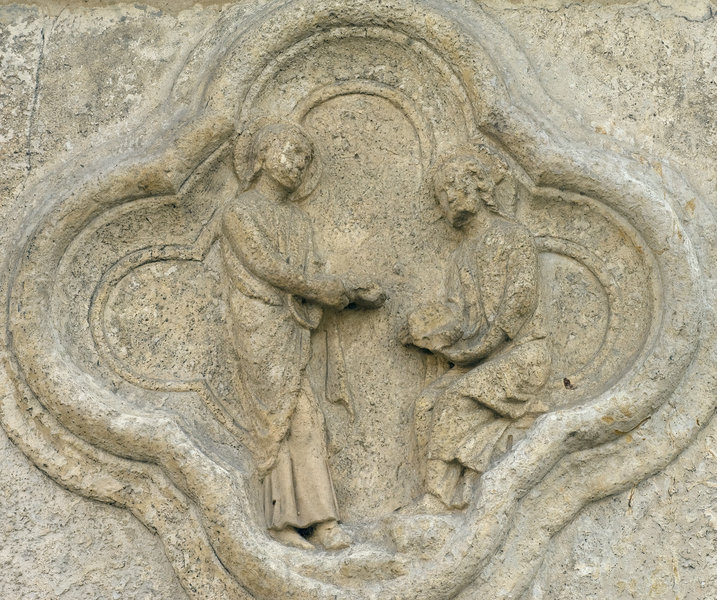 ‘Make It Loud and Clear’

Quatrefoil 19 is situated under the buttress statue of Habakkuk in the west façade between the north and central porches of the High Gothic church of Amiens Cathedral. It depicts the prophet (seated) ready to receive a revelation from God, as recorded in Habakkuk 2:2. The prophet is about to write it down to make it available to those who must receive it and gain faith. They will be sustained by the prophet’s delivery of this message (2:4b).

God—depicted anthropomorphically—stands before the prophet in the quatrefoil and has a nimbus that signifies radiant divine glory. His hand is extended toward the prophet, conjuring the context of numinous communication. Seated like an ancient scribe, Habakkuk has the writing tablet on his lap, recalling a time before writing desks or tables were invented. His feet are resting on a footstool.

Christians and others of medieval and later times would have readily associated the standing divine figure with Christ. Christ is delivering his prophetic message to Habakkuk as though dictating his good news to a gospel writer. John Ruskin, the famous Victorian art critic, wrote forthrightly, ‘The prophet is writing on his tablet to Christ’s dictation’ (2008: 231).

Whereas the scene undoubtedly reproduces Habakkuk 2:2, which underscores the writing down of the vision of what God will ultimately do (2.3a), the scene captures the moment just before writing begins. We see the prophet giving full attention to the divine figure, seeking to grasp and comprehend the message before he writes it down for others. The prophet’s head is tilted, suggesting attentiveness. The relief recalls the declaration of the prophet who has just said, ‘I will keep watch to see what [the Lord] will say to me’ (2:1). At the ‘appointed time’ (2:3), God will grant the vision to the prophet who strains to hear God’s words.

1 The oracle of God which Habakʹkuk the prophet saw.

2O Lord, how long shall I cry for help,

and thou wilt not hear?

Or cry to thee “Violence!”

and thou wilt not save?

3Why dost thou make me see wrongs

and look upon trouble?

Destruction and violence are before me;

4So the law is slacked

and justice never goes forth.

For the wicked surround the righteous,

so justice goes forth perverted.

5Look among the nations, and see;

wonder and be astounded.

For I am doing a work in your days

that you would not believe if told.

6For lo, I am rousing the Chaldeʹans,

that bitter and hasty nation,

who march through the breadth of the earth,

to seize habitations not their own.

7Dread and terrible are they;

their justice and dignity proceed from themselves.

8Their horses are swifter than leopards,

more fierce than the evening wolves;

their horsemen press proudly on.

Yea, their horsemen come from afar;

9They all come for violence;

terror of them goes before them.

10At kings they scoff,

and of rulers they make sport.

They laugh at every fortress,

for they heap up earth and take it.

11Then they sweep by like the wind and go on,

12Art thou not from everlasting,

O Lord my God, my Holy One?

We shall not die.

O Lord, thou hast ordained them as a judgment;

and thou, O Rock, hast established them for chastisement.

13Thou who art of purer eyes than to behold evil

and canst not look on wrong,

why dost thou look on faithless men,

and art silent when the wicked swallows up

the man more righteous than he?

14For thou makest men like the fish of the sea,

15He brings all of them up with a hook,

he drags them out with his net,

he gathers them in his seine;

so he rejoices and exults.

16Therefore he sacrifices to his net

and burns incense to his seine;

for by them he lives in luxury,

and his food is rich.

17Is he then to keep on emptying his net,

and mercilessly slaying nations for ever?

2I will take my stand to watch,

and station myself on the tower,

and look forth to see what he will say to me,

and what I will answer concerning my complaint.

2And the Lord answered me:

make it plain upon tablets,

so he may run who reads it.

3For still the vision awaits its time;

it hastens to the end—it will not lie.

If it seem slow, wait for it;

it will surely come, it will not delay.

4Behold, he whose soul is not upright in him shall fail,

but the righteous shall live by his faith.

the arrogant man shall not abide.

His greed is as wide as Sheol;

He gathers for himself all nations,

and collects as his own all peoples.”

6Shall not all these take up their taunt against him, in scoffing derision of him, and say,

“Woe to him who heaps up what is not his own—

and loads himself with pledges!”

7Will not your debtors suddenly arise,

and those awake who will make you tremble?

Then you will be booty for them.

8Because you have plundered many nations,

all the remnant of the peoples shall plunder you,

9Woe to him who gets evil gain for his house,

to set his nest on high,

to be safe from the reach of harm!

10You have devised shame to your house

by cutting off many peoples;

you have forfeited your life.

11For the stone will cry out from the wall,

and the beam from the woodwork respond.

12Woe to him who builds a town with blood,

and founds a city on iniquity!

13Behold, is it not from the Lord of hosts

that peoples labor only for fire,

and nations weary themselves for nought?

14For the earth will be filled

with the knowledge of the glory of the Lord,

15Woe to him who makes his neighbors drink

of the cup of his wrath, and makes them drunk,

to gaze on their shame!

16You will be sated with contempt instead of glory.

Drink, yourself, and stagger!

The cup in the Lord’s right hand

will come around to you,

and shame will come upon your glory!

17The violence done to Lebanon will overwhelm you;

the destruction of the beasts will terrify you,

18What profit is an idol

when its maker has shaped it,

a metal image, a teacher of lies?

For the workman trusts in his own creation

when he makes dumb idols!

19Woe to him who says to a wooden thing, Awake;

to a dumb stone, Arise!

Can this give revelation?

Behold, it is overlaid with gold and silver,

and there is no breath at all in it.

20But the Lord is in his holy temple;

let all the earth keep silence before him. 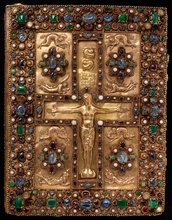 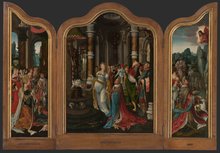 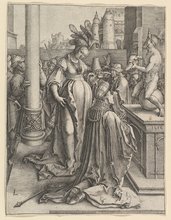