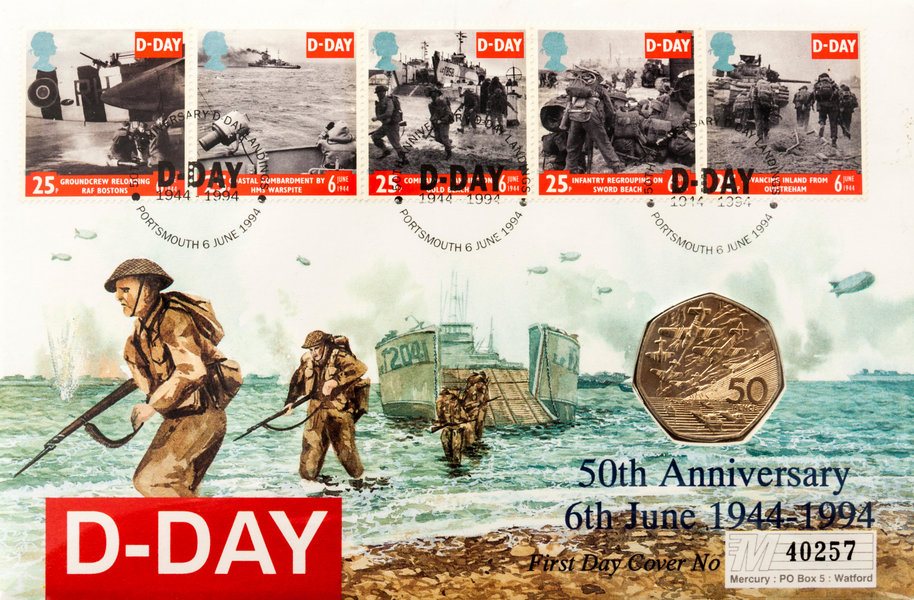 Award winning English sculptor John W. Mills, dubbed the ‘Sculptor to the Nation’ (Smith 2019), was commissioned by the Royal Mint in 1993 to commemorate the 50th anniversary of the largest amphibious assault in history. In the wee hours of 6 June 1944, the seas and skies teemed with ships, landing crafts, planes, and over 150,000 soldiers who stormed the beaches of Normandy as part of Operation Overlord. Mills’s vivid recollection of that historic day as an impressionable young boy inspired his design of a coin to memorialize those who sought to liberate German occupied France and eventually all of Europe.

The commemorative, uncirculated coin is packaged in a ‘First Day Cover’, an envelope illustrated with a watercolour print depicting British soldiers landing on the beaches of Normandy. The Cover also has five stamps, postmarked with a date exactly fifty years to the day after D-Day. They capture scenes from that fateful day filmed by the Army Film and Photographic Unit and record, in sequence, the pre-dawn preparations, the heroic landings, and the gallant advance inland that would eventually liberate occupied France.

Perhaps memorializing such brave actions in this manner seems inappropriate as Allied soldiers lost much that day, whether their lives or their innocence, that cannot, like mass-produced coins and stamps, have a price put on them. Nevertheless, the uncirculated coins, the five post-marked stamps, and their First Day Covers commemorate the shared sacrifice of the fallen, denoting the love evident in ‘laying down one’s life for another’ (John 15:13).

The Church has often made glib, trite, and impertinent associations between its sense of sacrifice and the sacrifice of soldiers for country, sometimes losing sight of the means by and the ends for which Christ’s sacrifice was made (John 15:9–13). This conflation has led to attempts to advance the Kingdom of God, even today, by the sword, despite Jesus’s refusal to be identified as a militaristic Messiah (John 10:10).

As these commemorative coins ‘abide’ in their First Day Covers in uncirculated, mint condition, they seem to point forward as well as backward; not only honouring a memory, but also expressing longing for a day when there will be no more death, no more pain, or suffering (Revelation 21:4).

It is this Kingdom that is propagated in the present by the Spirit as the sent disciples ‘abide’ in Christ (John 15:5) while they also go and bear fruit, ‘fruit that will last’ (John 15:16).