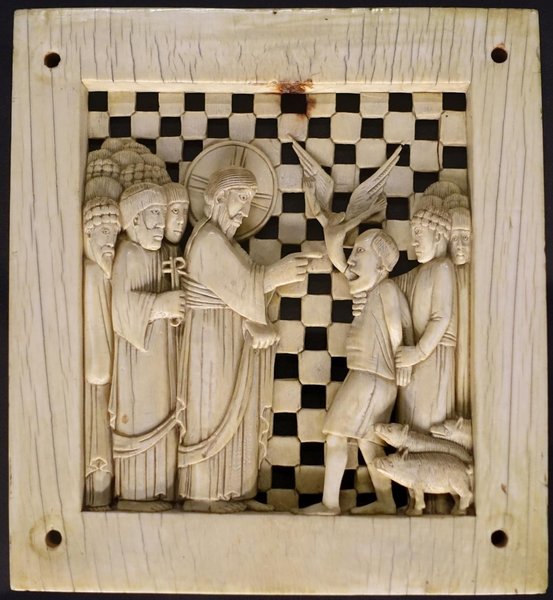 An anonymous tenth-century artist presents the story of the healing of a possessed man in this small ivory carving. With its open worked checkerboard background, originally layered with a copper plate, the relief was part of a larger narrative of the story of Christ, told in fifty or sixty similar ivory carvings. These were probably made for some form of liturgical furniture in the cathedral of Magdeburg. Only sixteen of these Magdeburg ivories have survived today (Jülich 2007: 85–6).

The artist has chosen the exact moment when Christ is ordering a demon to leave the man’s body. In this powerful symmetrical composition, we see Christ in profile on the left. Behind him—somewhat close and cramped together—are the twelve disciples. Peter is the most prominent, with his keys in his right hand (Matthew 16:19; 18:18), while further to the back some of the disciples are indicated only by their hair.

The right side of the relief is taken up by the possessed man, a winged demon flying out of his mouth (the head of the demon has broken off), and a person constraining him. By including this latter figure, the artist seems to refer to the verses where the possessed man is being described as wild, and difficult to hold down (Mark 5:4; Luke 8:29). Three small pigs are looking up curiously at the scene in front of them, still unaware of their impending fate.

In the Gospels the demon reveals his name as ‘Legion’, ‘for we are many’ (Mark 5:9; Luke 8:30). A legion was a unit of around 6000 men in the Roman army, so this could be seen as a direct allusion to the contemporary Roman occupation of Palestine (Boring 2006: 151). By expelling ‘Legion’ from the possessed man, Christ’s power is surpassing even that of the greatest earthly power of his time.

In this ivory carving, his superior authority is visualized. There is a monumentality to Christ’s figure even though the ivory object itself is relatively small, and there is a decisiveness in the gesture of his right hand as it points towards the demon. These elements create an important clarity, helping the beholder immediately to recognize and understand Christ’s power. 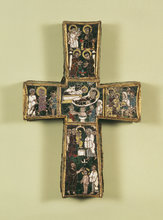 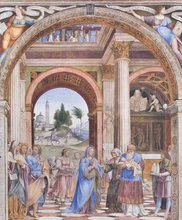