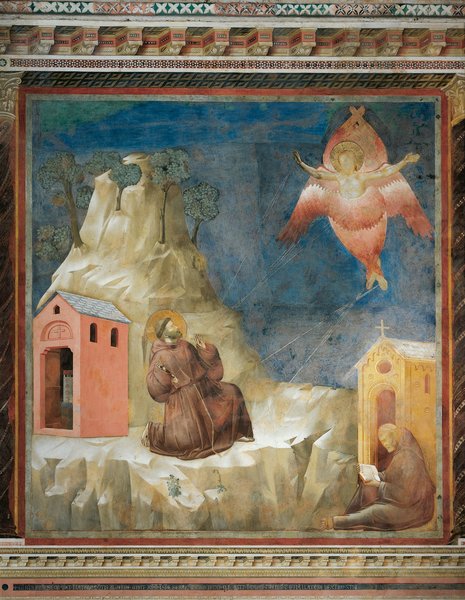 The Theatre of Divine Life

Commentary by
Matthew A. Rothaus Moser
Read by Ben Quash

The Legend of Francis is a series of twenty-eight frescoes in the Upper Church of the Basilica of Saint Francis at Assisi, painted by Giotto and his workshop. They follow the official chronicle of the Life of Francis by St Bonaventure.

In the scene showing Francis’s stigmatization, Giotto’s depiction of the seraph seems to recall elements of the vision of Isaiah 6—particularly its six wings. But (as in Bonaventure’s account) the seraph here is the crucified Christ, and Christ is also the ‘burning coal’ who sanctifies Francis by marking him with his own wounds.

With a naturalism that would be much imitated, Giotto sets the life of the saint within recognizable and habitable spaces, a ‘theatre of life’ (Lunghi 1996: 65). This ‘everydayness’ in Giotto’s frescoes might seem quite different from Isaiah’s vision of the celestial throne of God. Isaiah 6 is set in the Temple while Giotto’s settings are remarkable in their familiar, earthly specificity. Yet Giotto’s approach may help us see that Isaiah’s own attention to God’s presence is not, in fact, a stepping outside of ordinary history. Yes, the seraphim of Isaiah 6 proclaim that the Lord’s glory fills the Temple, but it also spills ever outward, filling the whole world (v.3). God’s glory may be encountered anywhere. It can break into ‘theatres of life’ of all kinds and in all periods; today where you are, just as in medieval Italy.

Francis’s dynamic posture communicates something of the shock to the human creature of this divine in-breaking. He is in mid-motion, having dropped down onto his right knee. His upper body angles itself toward the seraph as it bursts onto the scene. Along with his curled fingers and his facial expression, this allows Giotto to distill in a single image the drama of his surprise. The fresco may offer us a theatre of life, but it is certainly still theatre—no less dramatic for the everydayness of its setting.

The presence of Francis’s halo, despite being a supernatural element, is integrated into Giotto’s naturalistic depiction without any sense of awkwardness or inappropriateness. Like the three ‘holies’ that ring out in Isaiah’s theophany, this halo shows God’s sanctity is manifest ‘on earth as in heaven’. It occurs within the scheme and movements of the natural order, as human and divine life are enfolded together in holy history.

“Holy, holy, holy is the Lord of hosts;

the whole earth is full of his glory.”

4And the foundations of the thresholds shook at the voice of him who called, and the house was filled with smoke. 5And I said: “Woe is me! For I am lost; for I am a man of unclean lips, and I dwell in the midst of a people of unclean lips; for my eyes have seen the King, the Lord of hosts!”

6 Then flew one of the seraphim to me, having in his hand a burning coal which he had taken with tongs from the altar. 7And he touched my mouth, and said: “Behold, this has touched your lips; your guilt is taken away, and your sin forgiven. 8And I heard the voice of the Lord saying, “Whom shall I send, and who will go for us?” Then I said, “Here am I! Send me.” 9And he said, “Go, and say to this people:

‘Hear and hear, but do not understand;

see and see, but do not perceive.’

10Make the heart of this people fat,

and their ears heavy,

and shut their eyes;

lest they see with their eyes,

and hear with their ears,

and understand with their hearts,

and turn and be healed.”

and houses without men,

and the land is utterly desolate,

12and the Lord removes men far away,

and the forsaken places are many in the midst of the land.

13And though a tenth remain in it,

it will be burned again,

when it is felled.”

The holy seed is its stump. 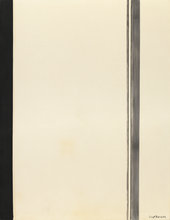 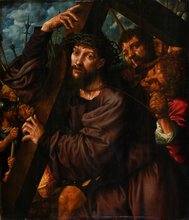