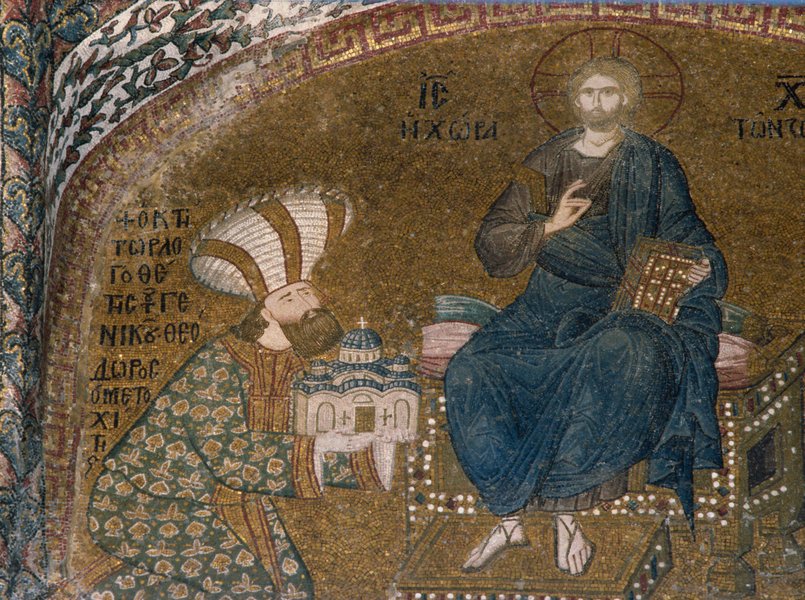 ‘Built into a Spiritual House’

In an act combining splendour and humility, a richly appointed figure kneels before Christ, presenting a model of the very same church in which the scene is depicted. In the centre, Christ Pantokrator sits enthroned, Bible in one hand and the other hand raised in blessing. The glittering mosaic with its golden background reflects the heavenly realm of Christ, as well as the magnificence of the patron.

The kneeling figure in the splendid hat is Theodore Metochites (1270–1332), Byzantine poet, humanist, and statesman. He is credited with restoring the church of the Chora Monastery, also known by its Turkish name, Kariye Camii. Now a national museum, the renovated church, with its richly restored mosaic programme, is considered one of the most important Byzantine monuments after Hagia Sophia.

The mosaic of the church presented to Christ is one of two installed by Metochites at the Chora. Likely to have been founded in the sixth century, the Chora, along with Constantinople itself, had fallen into serious disrepair. In the late eleventh and early twelfth centuries, private patrons attempted to restore the glory of the city and its religious monuments, as an expression of piety and a safeguard for their salvation.

Describing his effort, Metochites wrote: ‘This monastery [of the Chora] has meant more to me than anything in the world; it is so now and will be in the time to come. It was a work of noble love for things good and beautiful, and assured a truly secure profit and wealth for the soul’ (Evans 2004: 17–18).

The Chora church is widely considered a masterpiece of this Palaiologan renaissance. ‘Chosen and precious’, it witnesses to the ‘chosen and precious’ Christ evoked in 1 Peter (vv.4, 6). However, just as in Metochites’s time, preserving its artistic programme is an ongoing process. While a landmark restoration in 1948 revealed the magnificent mosaics and frescoes visible today, due to their current state of decline, Kariye Camii is on the World Monuments Fund’s list of the 100 Most Endangered Sites. 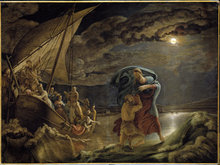