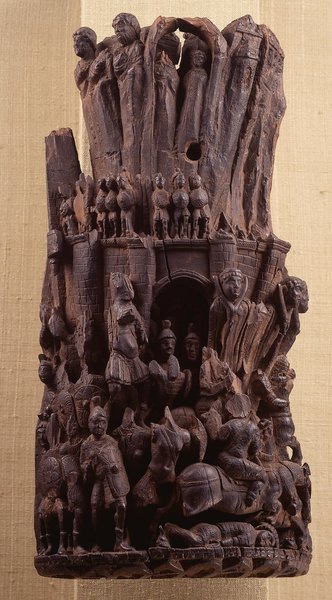 Be Strong and of Good Courage

So rare is this high-relief wooden sculpture that it is impossible to be at all certain either of its provenance or original purpose. It was said at the time of its acquisition in 1900 to be from Egypt, but is associated with late-Roman Ravenna in current scholarship. It may have been part of a tiered series of narrative scenes, from which the other tiers are now missing. It is usually dated on stylistic grounds to the early fifth century (Von Törne 2010).

Joseph Strzygowski (1862–1941), who purchased the object for the new Kaiser Friedrich Museum in Berlin, was the first to note parallels for the figures visible here hanging on forked staves. They recall scenes of the execution of the Amorite kings (Joshua 10:26) that can be found on the Vatican Joshua Roll. Since then, although other possible historical interpretations of the scene have been suggested, a biblical interpretation remains the most likely.

Reading around the sculpture’s curved surface, we can follow the arrival on foot of the Israelites after their forced march. Joshua is perhaps the damaged figure in the middle register. The Gibeonites sallying forth to help him are also shown, as is the flight of the Amorites on horseback and the execution of their kings (just four, rather than the five mentioned in the text). More soldiers, shown small scale, man the walls, two taller figures stand sheltered within a city gate, and three monumental bearded figures loom protectively outside the walls.

These protective figures have been read as Christian saints, and there are certainly Christian references elsewhere on the relief—the leading foot-soldier carries a labarum, the standard popularized in the early fourth century by the Emperor Constantine. Origen, in his Homilies on Joshua, assimilates Joshua with Jesus, and presents the battle for Canaan as a spiritual struggle, the internal battle against the principalities and powers that incite to sin (Homilies 1.6). Presiding over but disengaged from the carnage below, the protective figures radiate a feeling of security and endurance, of confidence in the eventual outcome of the struggle. This is surely the core message of Joshua 10: ‘Do not be afraid or dismayed; be strong, and of good courage’ (10:25).

10 When Adoʹni-zeʹdek king of Jerusalem heard how Joshua had taken Ai, and had utterly destroyed it, doing to Ai and its king as he had done to Jericho and its king, and how the inhabitants of Gibeon had made peace with Israel and were among them, 2he feared greatly, because Gibeon was a great city, like one of the royal cities, and because it was greater than Ai, and all its men were mighty. 3So Adoʹni-zeʹdek king of Jerusalem sent to Hoham king of Hebron, to Piram king of Jarmuth, to Japhiʹa king of Lachish, and to Debir king of Eglon, saying, 4“Come up to me, and help me, and let us smite Gibeon; for it has made peace with Joshua and with the people of Israel.” 5Then the five kings of the Amorites, the king of Jerusalem, the king of Hebron, the king of Jarmuth, the king of Lachish, and the king of Eglon, gathered their forces, and went up with all their armies and encamped against Gibeon, and made war against it.

6 And the men of Gibeon sent to Joshua at the camp in Gilgal, saying, “Do not relax your hand from your servants; come up to us quickly, and save us, and help us; for all the kings of the Amorites that dwell in the hill country are gathered against us.” 7So Joshua went up from Gilgal, he and all the people of war with him, and all the mighty men of valor. 8And the Lord said to Joshua, “Do not fear them, for I have given them into your hands; there shall not a man of them stand before you.” 9So Joshua came upon them suddenly, having marched up all night from Gilgal. 10And the Lord threw them into a panic before Israel, who slew them with a great slaughter at Gibeon, and chased them by the way of the ascent of Beth-horʹon, and smote them as far as Azeʹkah and Makkeʹdah. 11And as they fled before Israel, while they were going down the ascent of Beth-horʹon, the Lord threw down great stones from heaven upon them as far as Azeʹkah, and they died; there were more who died because of the hailstones than the men of Israel killed with the sword.

12 Then spoke Joshua to the Lord in the day when the Lord gave the Amorites over to the men of Israel; and he said in the sight of Israel,

“Sun, stand thou still at Gibeon,

and thou Moon in the valley of Aiʹjalon.”

13And the sun stood still, and the moon stayed,

until the nation took vengeance on their enemies.

Is this not written in the Book of Jashar? The sun stayed in the midst of heaven, and did not hasten to go down for about a whole day. 14There has been no day like it before or since, when the Lord hearkened to the voice of a man; for the Lord fought for Israel.

15 Then Joshua returned, and all Israel with him, to the camp at Gilgal.

16 These five kings fled, and hid themselves in the cave at Makkeʹdah. 17And it was told Joshua, “The five kings have been found, hidden in the cave at Makkeʹdah.” 18And Joshua said, “Roll great stones against the mouth of the cave, and set men by it to guard them; 19but do not stay there yourselves, pursue your enemies, fall upon their rear, do not let them enter their cities; for the Lord your God has given them into your hand.” 20When Joshua and the men of Israel had finished slaying them with a very great slaughter, until they were wiped out, and when the remnant which remained of them had entered into the fortified cities, 21all the people returned safe to Joshua in the camp at Makkeʹdah; not a man moved his tongue against any of the people of Israel.

22 Then Joshua said, “Open the mouth of the cave, and bring those five kings out to me from the cave.” 23And they did so, and brought those five kings out to him from the cave, the king of Jerusalem, the king of Hebron, the king of Jarmuth, the king of Lachish, and the king of Eglon. 24And when they brought those kings out to Joshua, Joshua summoned all the men of Israel, and said to the chiefs of the men of war who had gone with him, “Come near, put your feet upon the necks of these kings.” Then they came near, and put their feet on their necks. 25And Joshua said to them, “Do not be afraid or dismayed; be strong and of good courage; for thus the Lord will do to all your enemies against whom you fight.” 26And afterward Joshua smote them and put them to death, and he hung them on five trees. And they hung upon the trees until evening; 27but at the time of the going down of the sun, Joshua commanded, and they took them down from the trees, and threw them into the cave where they had hidden themselves, and they set great stones against the mouth of the cave, which remain to this very day.

28 And Joshua took Makkeʹdah on that day, and smote it and its king with the edge of the sword; he utterly destroyed every person in it, he left none remaining; and he did to the king of Makkeʹdah as he had done to the king of Jericho.

29 Then Joshua passed on from Makkeʹdah, and all Israel with him, to Libnah, and fought against Libnah; 30and the Lord gave it also and its king into the hand of Israel; and he smote it with the edge of the sword, and every person in it; he left none remaining in it; and he did to its king as he had done to the king of Jericho.

31 And Joshua passed on from Libnah, and all Israel with him, to Lachish, and laid siege to it, and assaulted it: 32and the Lord gave Lachish into the hand of Israel, and he took it on the second day, and smote it with the edge of the sword, and every person in it, as he had done to Libnah.

33 Then Horam king of Gezer came up to help Lachish; and Joshua smote him and his people, until he left none remaining.

34 And Joshua passed on with all Israel from Lachish to Eglon; and they laid siege to it, and assaulted it; 35and they took it on that day, and smote it with the edge of the sword; and every person in it he utterly destroyed that day, as he had done to Lachish.

36 Then Joshua went up with all Israel from Eglon to Hebron; and they assaulted it, 37and took it, and smote it with the edge of the sword, and its king and its towns, and every person in it; he left none remaining, as he had done to Eglon, and utterly destroyed it with every person in it.

38 Then Joshua, with all Israel, turned back to Debir and assaulted it, 39and he took it with its king and all its towns; and they smote them with the edge of the sword, and utterly destroyed every person in it; he left none remaining; as he had done to Hebron and to Libnah and its king, so he did to Debir and to its king.

40 So Joshua defeated the whole land, the hill country and the Negeb and the lowland and the slopes, and all their kings; he left none remaining, but utterly destroyed all that breathed, as the Lord God of Israel commanded. 41And Joshua defeated them from Kaʹdesh-barʹnea to Gaza, and all the country of Goshen, as far as Gibeon. 42And Joshua took all these kings and their land at one time, because the Lord God of Israel fought for Israel. 43Then Joshua returned, and all Israel with him, to the camp at Gilgal. 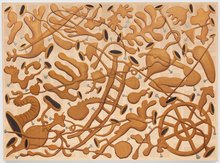