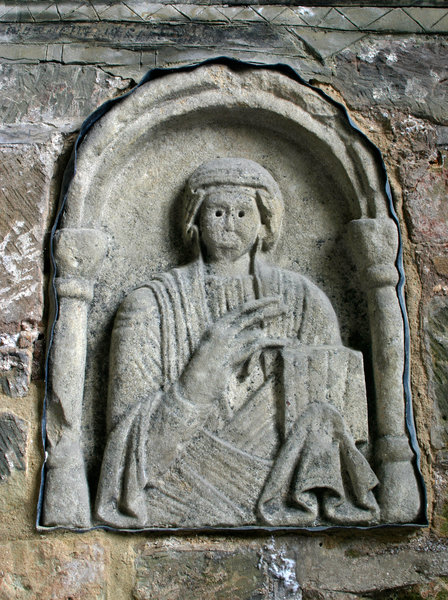 Mary And Her Book

This majestic carved stone icon of the Virgin is part of a remarkable collection of Anglo-Saxon relief sculpture (animal and geometric friezes and figural panels) dated to the eighth–ninth centuries CE, and located in the Church of Saints Mary and Hardulph in Breedon-on-the-Hill in central England.

The half-length figure is framed in an arched niche between two short columns. Originally, she was most probably painted in rich colours, and her eyes would have been inset with coloured glass—we can only imagine their dramatic appearance when animated by the flickering light of candles.

Mary wears voluminous drapery and, in typical Byzantine fashion, a heavy veil covering her head (maphorion). Her hieratic pose is modelled on that of the Virgin Hodegetria, a Byzantine iconography in which the Virgin holds the infant Jesus and gestures towards him as the source of our Salvation. (The word Hodegetria literally means ‘She who points the Way’.)

At Breedon, though, a book held in her covered hand takes the place of the child. This choice may appear strange—indeed some scholars have wondered whether this was a mistake; whether the carver confused, or fused, Marian iconography with that of Christ Pantokrator, who is similarly depicted holding the Gospels. However, recent research has explored how the book is in fact a common and meaningful attribute and metaphor of the Virgin Mary herself, and that exegetically the book has come to signify the mystery of her holy conception. While an open book is frequently seen in scenes of the Annunciation (where Gabriel’s visit was said to coincide with Mary’s reading of the prophecy regarding the virgin birth: Isaiah 7:14), a closed book becomes an allegorical representation of its salvific outcome: the Word Incarnate, the Logos.

The closed book that Mary holds can therefore be seen as symbolic of her active role in God’s plan, and an exhortation to us to discover, treasure, and follow the word of God in the Gospels. 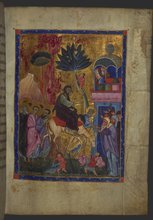 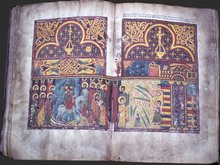 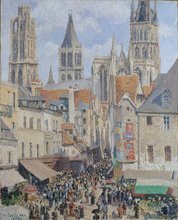