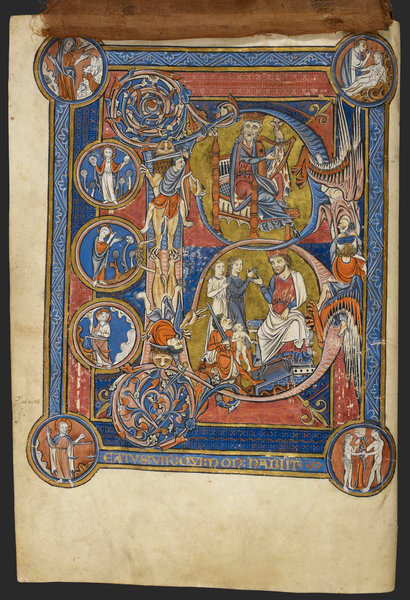 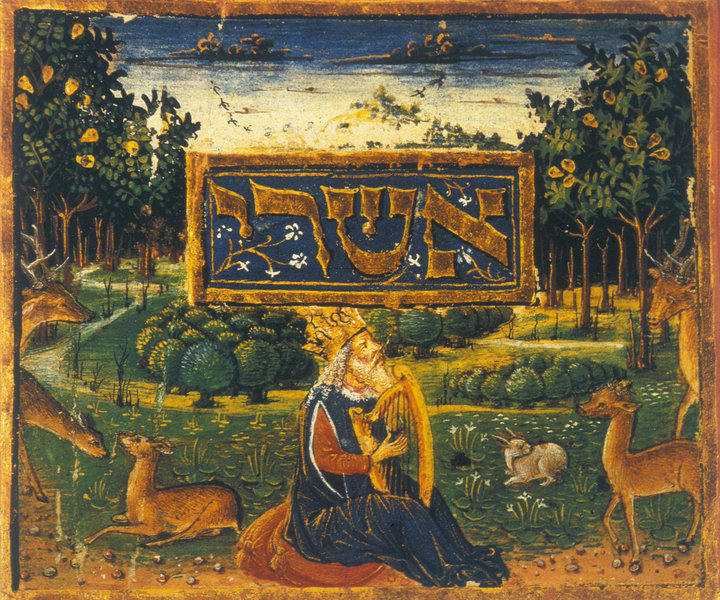 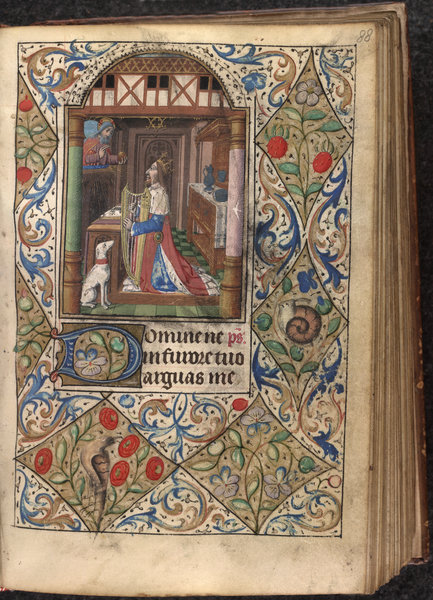 Fruit in its Season

The binary opposition in Psalm 1 of the ‘blessed’ and the ‘wicked’ person presents challenges to visual interpretation simply because there are inherently two subjects.

Early Christian and Jewish artists sometimes settled for a straightforward depiction of King David and his harp, yet through the early Middle Ages they also made visual allusions to his best-known exploits while illuminating his Psalms. Some eleventh- and twelfth-century Beatus pages have David’s harp music placating the spiritus malus of Saul; others show his defeat of an archetypal ‘wicked’ man, Goliath. Occasionally they drew attention to the way the book of Psalms as a whole was a meditation on Torah. This was sometimes represented in Benedictine manuscripts by the twin tablets of the Decalogue doubling as a harp or, as in the Beatus page of the St Alban’s Psalter, by showing David with his harp in one hand and a symbolic book in the other.

Christological readings of Psalm 1 came to be normative from Augustine’s On the Psalms (1:1–6) through to the eleventh-century Glossa Ordinaria (PL 113, col. 844). It was one of many Psalms that were regarded as messianic by Christian theologians—which is why the Bodleian’s MS Douce 313 (fol. 170v) shows David having a vision of the crucifixion while he harps. The incorporation of an image of Christ crucified on a Beatus page, when it occurs, does more than make a connection between Psalm 1 and Psalm 22; it draws attention to christological themes perceived by Christian exegetes in the entirety of the Psalter.

Still other Beatus page images show David tuning his harp strings to bells. When only four bells are shown, the artist may be making a further reference to what Christian tradition saw as the propaedeutic (or preparatory) work of the Old Testament in relation to the New. In this case a harmony between the Psalms and the four Gospels is highlighted—supported by the frequency with which the four Evangelists record Jesus quoting the Psalms.

While most of the Jewish images come later than the fourteenth century, they can reflect, as does our Rothschild Miscellany example, an earlier marriage of ancient Hellenistic with Jewish iconography that would be largely recognizable to medieval and early modern Christian viewers too. Among such elements are the attentive hart, associated with David from Psalm 42, and perhaps even the rabbit, in both religious traditions associated with fecundity. While by this period the harp of David was often represented in Christian images as having ten strings, harmoniously tied to the Law on which the Psalms meditate (and the Decalogue specifically), in Jewish tradition two other options were possible. The first of these accords it seven strings, representing the fullness of Creation. Rabbinical commentary holds out the possibility of eight strings in contexts in which David is viewed as himself to be the Messiah (Tosefta Arakhin 2.7; Babylonian Talmud Arakhin 13b; Pirqe R. Eliezer 19), since eight is associated in both traditions with renewed Creation, ‘a new heaven and a new earth’.

Another rabbinic text claims that David made the strings for his harp from the entrails of the sacrificial ram miraculously provided instead of Isaac on Mt Moriah (Genesis 22; Pirqe R. Eliezer 31); connecting that event, the Akedah, with the restoration of Paradise, much as the Akedah in Christian typology becomes a precursor of the Crucifixion.

There may be further hints of mutual exegetical awareness here between medieval Jewish and medieval Christian tradition; a Midrash on Psalm 1:1 (Midrash Tehellim 1.1) has the verse spoken first by Adam, who wishes he had not taken the counsel of the serpent, and scorned the commandment of the Creator. In Christian exegesis, as exampled in the Rutland Psalter, the memory of the fall of the ‘first Adam’ is visually as well as rhetorically a foil to the choice of the ‘blessed’ man, Christ.

The catalogue of visual interpretation of Psalm 1 is richly variegated—we see only a small portion of it here. The examples in this exhibition capture, however, something of the central themes and imaginative range produced by Jewish as well as Christian artist–illuminators of the Psalms. Psalm 1 in particular is interpreted as an inter-textual theological harmony, drawing in to itself many other texts.

The fecundity of these interpretations is well-symbolized by the tree branch that David holds with his left hand in the Rutland Psalter. It seems to grow out of his loins and through his harp, suggesting that—for us, perhaps, as for him—singing the praises of the Lord is a natural outgrowth of the harmonious fruitfulness of a faithful life.