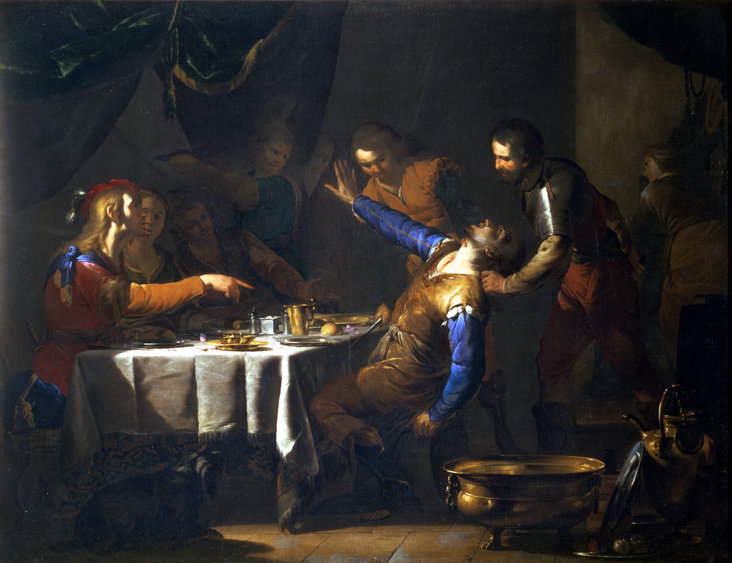 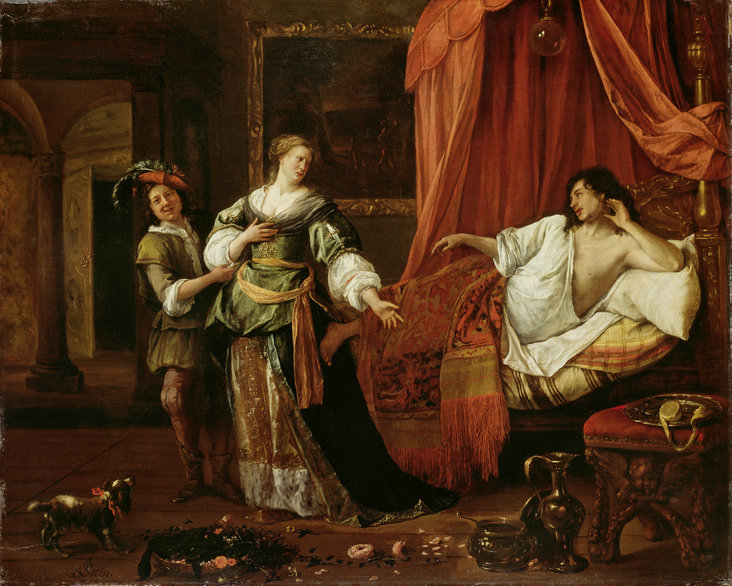 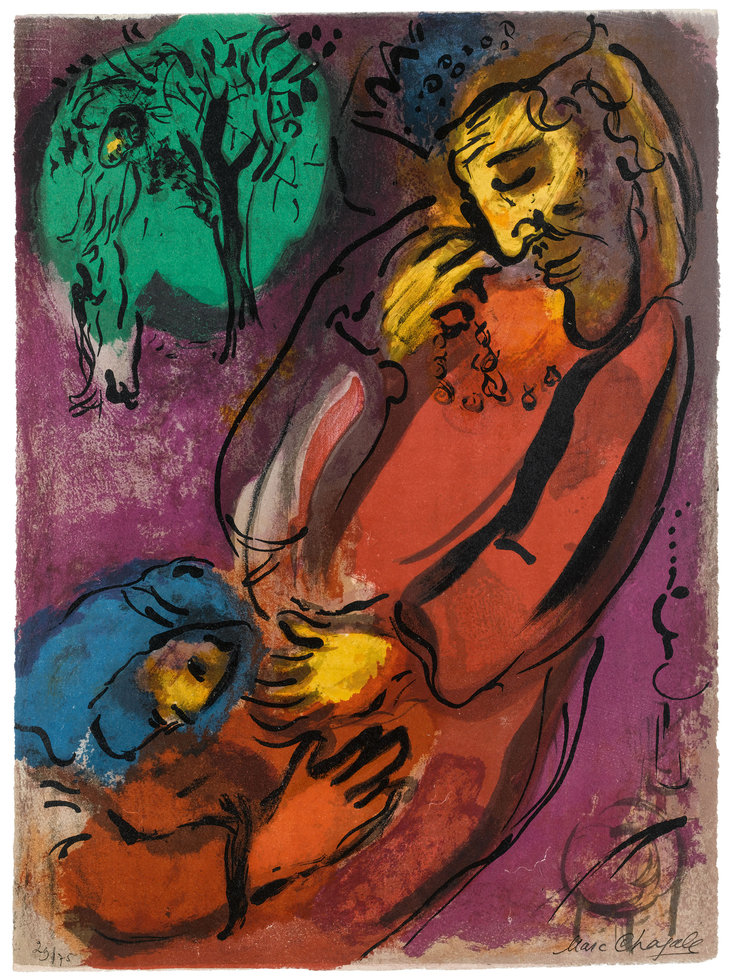 13 Now Abʹsalom, David’s son, had a beautiful sister, whose name was Tamar; and after a time Amnon, David’s son, loved her. 2And Amnon was so tormented that he made himself ill because of his sister Tamar; for she was a virgin, and it seemed impossible to Amnon to do anything to her. 3But Amnon had a friend, whose name was Jonʹadab, the son of Shimʹe-ah, David’s brother; and Jonʹadab was a very crafty man. 4And he said to him, “O son of the king, why are you so haggard morning after morning? Will you not tell me?” Amnon said to him, “I love Tamar, my brother Abʹsalom’s sister.” 5Jonʹadab said to him, “Lie down on your bed, and pretend to be ill; and when your father comes to see you, say to him, ‘Let my sister Tamar come and give me bread to eat, and prepare the food in my sight, that I may see it, and eat it from her hand.’ ” 6So Amnon lay down, and pretended to be ill; and when the king came to see him, Amnon said to the king, “Pray let my sister Tamar come and make a couple of cakes in my sight, that I may eat from her hand.”

7 Then David sent home to Tamar, saying, “Go to your brother Amnon’s house, and prepare food for him.” 8So Tamar went to her brother Amnon’s house, where he was lying down. And she took dough, and kneaded it, and made cakes in his sight, and baked the cakes. 9And she took the pan and emptied it out before him, but he refused to eat. And Amnon said, “Send out every one from me.” So every one went out from him. 10Then Amnon said to Tamar, “Bring the food into the chamber, that I may eat from your hand.” And Tamar took the cakes she had made, and brought them into the chamber to Amnon her brother. 11But when she brought them near him to eat, he took hold of her, and said to her, “Come, lie with me, my sister.” 12She answered him, “No, my brother, do not force me; for such a thing is not done in Israel; do not do this wanton folly. 13As for me, where could I carry my shame? And as for you, you would be as one of the wanton fools in Israel. Now therefore, I pray you, speak to the king; for he will not withhold me from you.” 14But he would not listen to her; and being stronger than she, he forced her, and lay with her.

15 Then Amnon hated her with very great hatred; so that the hatred with which he hated her was greater than the love with which he had loved her. And Amnon said to her, “Arise, be gone.” 16But she said to him, “No, my brother; for this wrong in sending me away is greater than the other which you did to me.” But he would not listen to her. 17He called the young man who served him and said, “Put this woman out of my presence, and bolt the door after her.” 18Now she was wearing a long robe with sleeves; for thus were the virgin daughters of the king clad of old. So his servant put her out, and bolted the door after her. 19And Tamar put ashes on her head, and rent the long robe which she wore; and she laid her hand on her head, and went away, crying aloud as she went.

20 And her brother Abʹsalom said to her, “Has Amnon your brother been with you? Now hold your peace, my sister; he is your brother; do not take this to heart.” So Tamar dwelt, a desolate woman, in her brother Abʹsalom’s house. 21When King David heard of all these things, he was very angry. 22But Abʹsalom spoke to Amnon neither good nor bad; for Abʹsalom hated Amnon, because he had forced his sister Tamar.

23 After two full years Abʹsalom had sheepshearers at Baʹal-haʹzor, which is near Eʹphraim, and Abʹsalom invited all the king’s sons. 24And Abʹsalom came to the king, and said, “Behold, your servant has sheepshearers; pray let the king and his servants go with your servant.” 25But the king said to Abʹsalom, “No, my son, let us not all go, lest we be burdensome to you.” He pressed him, but he would not go but gave him his blessing. 26Then Abʹsalom said, “If not, pray let my brother Amnon go with us.” And the king said to him, “Why should he go with you?” 27But Abʹsalom pressed him until he let Amnon and all the king’s sons go with him. 28Then Abʹsalom commanded his servants, “Mark when Amnon’s heart is merry with wine, and when I say to you, ‘Strike Amnon,’ then kill him. Fear not; have I not commanded you? Be courageous and be valiant.” 29So the servants of Abʹsalom did to Amnon as Abʹsalom had commanded. Then all the king’s sons arose, and each mounted his mule and fled.

30 While they were on the way, tidings came to David, “Abʹsalom has slain all the king’s sons, and not one of them is left.” 31Then the king arose, and rent his garments, and lay on the earth; and all his servants who were standing by rent their garments. 32But Jonʹadab the son of Shimʹe-ah, David’s brother, said, “Let not my lord suppose that they have killed all the young men the king’s sons, for Amnon alone is dead, for by the command of Abʹsalom this has been determined from the day he forced his sister Tamar. 33Now therefore let not my lord the king so take it to heart as to suppose that all the king’s sons are dead; for Amnon alone is dead.”

34 But Abʹsalom fled. And the young man who kept the watch lifted up his eyes, and looked, and behold, many people were coming from the Horonaʹim road by the side of the mountain. 35And Jonʹadab said to the king, “Behold, the king’s sons have come; as your servant said, so it has come about.” 36And as soon as he had finished speaking, behold, the king’s sons came, and lifted up their voice and wept; and the king also and all his servants wept very bitterly.