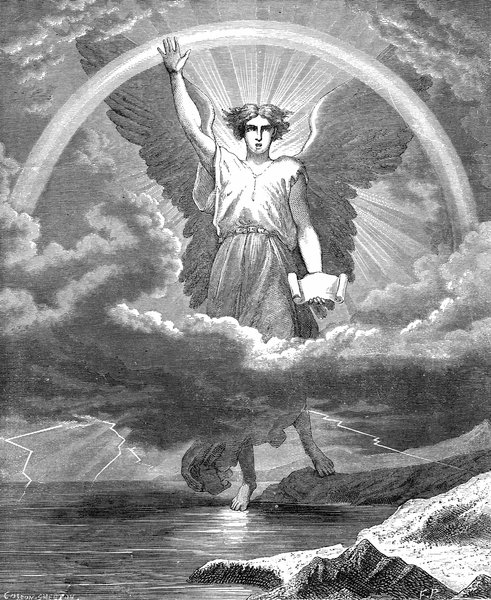 Revelation 10’s mighty angel impresses by his acrobatic skills. He is able to straddle both land and sea, like Christ himself, who walks on the Sea of Galilee without sinking (Matthew 14:22–33; Mark 6:45–52; John 6:16–21). In this dramatic wood engraving of the scene, from a nineteenth-century illustrated Bible, the delicate poise of the angel’s feet contrasts with his muscular, colossal upper body. ‘Colossal’ is an appropriate adjective, for this engraving, in common with several nineteenth-century depictions of this angel, consciously mirrors the Colossus of Rhodes. The rays emanating from his head recall the sun-god Helios, whose statue straddled the entrance to Rhodes harbour. That wonder of the ancient world, re-imagined by Martin Heemskerk in his widely-known engraving of 1570, serves as an appropriate model for John’s solar-faced angel.

This engraving also shows the influence of Benjamin West’s A Mighty Angel Standeth upon the Land and upon the Sea (c.1797). Yet, in contrast to West’s painting, where the angel treads turbulent waters, the sea in this engraving is as calm as a millpond. The book of Revelation, like the Bible as a whole, views the sea as a place of danger, evil, and chaos, from which the beast emerges (Revelation 13:1–8). John’s location on the island of Patmos added a further dimension, since the surrounding waters of the Aegean were dominated by Rome, the beast’s current incarnation. The engraver visualizes the effects of the angel’s descent. Like the ‘sea of glass, like crystal’ that John previously saw in heaven (4:6), this sea has now been subdued. It has lost its ability to threaten, as heaven’s herald announces to the earth that ‘there should be no more delay’ (10:6). The roaring of the lion (10:3) has tamed the turbulent waters. The scene is set for Revelation’s climax, when the sea will be no more (21:1).