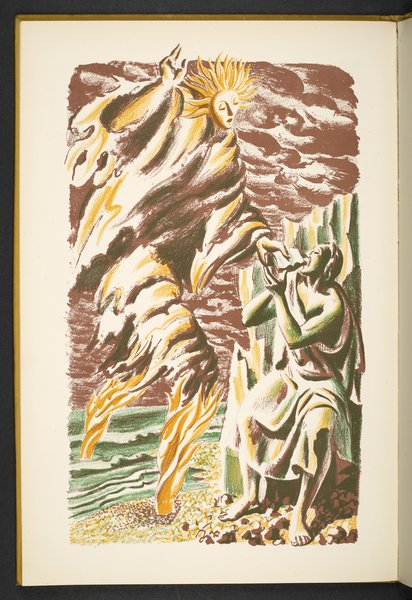 In this dynamic image, one of a series of lithographs published in book-form in 1946, Hans Feibusch (1898–1998) presents the moment of John’s prophetic inspiration. John devours the ‘little book’ of God’s word in the angel’s left hand. The energy in the angel’s posture evokes the Spirit-breathed inspiration John now receives. Having consumed this book, he will ‘again prophesy about many peoples and nations and tongues and kings’ (Revelation 10:11). He is seated on a rock, resembling a chair or throne, symbol of the teaching authority he now possesses.

Many will know Albrecht Dürer’s woodcut of this scene in his 1498 Apocalypsis cum figuris, on which Feibusch draws. Yet Feibusch has made the subject his own, in light of his experience. A German Jewish artist who fled to England in May 1933 following Nazi denunciation of his work, his story mirrors that of his subject. Like John of Patmos, this John (Hans=Johannes) too has crossed a sea to his place of exile and inspiration. This New Testament image, produced in the aftermath of the Second World War, hints at that spiritual journey which would eventually lead Feibusch into the Church of England.

Does Feibusch regard the prophet John as a type of the inspired artist, as did so many of his artistic forbears (e.g. Botticelli, Duvet, Velázquez, even Dürer)? He suggests as much in words published in the same year as his Revelation lithographs, calling for a renewal of religious art to speak to those haunted by the horrors of war. Though his main subject is mural-painting, his words are equally apt for John’s Apocalypse:

Only the most profound, tragic, moving, sublime vision can redeem us. The voice of the Church should be heard loud over the thunderstorm; and the artist should be her mouthpiece, as of old (Feibusch 1946: 92).