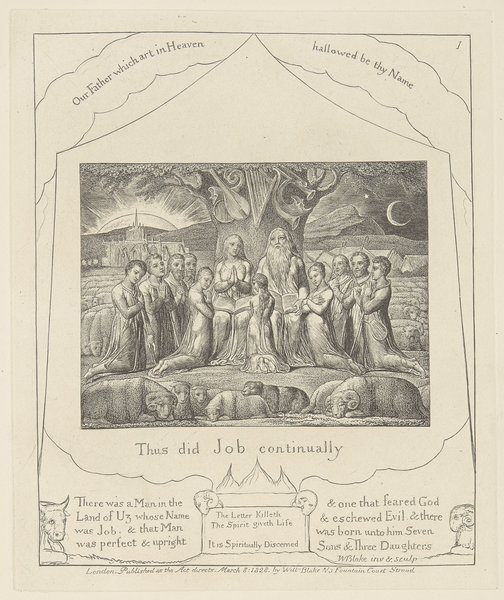 ‘There was a man in the land of Uz, whose name was Job; and that man was perfect and upright…’ (Job 1:1 KJV). So begins the book of Job, which the English poet, painter, and printmaker, William Blake, depicts in a series of twenty-one designs. Blake’s first Job series was produced in watercolour in c.1805–06. In 1825, he published engravings based on these designs. Here, in the first engraving, ‘The Letter Killeth The Spirit giveth Life’ (2 Corinthians 3:6 KJV) is inscribed on an altar which is depicted at bottom centre, in the margin below the main image.

In the main image, under a tree, Job and his family are engaged in prayer—some seated and others kneeling. The prayer books on the laps of Job and his wife, and the opening words of the Our Father in the margin above, suggest that they are praying with traditional liturgical texts.

Blake here rejects the idea of organized religion, believing that it stifled the individual’s engagement with the divine; for Blake, divinity is found in imagination. Blake uses Paul’s words to critique the conventional piety that Job and his family are engaged in as akin to the ‘letter’ that ‘killeth’. Blake’s Job is presented as a self-righteous man who engages in rote piety, not with imagination. This point is reinforced by the depiction of musical instruments hanging in the tree above the family, which alludes to Psalm 137:2: ‘We hanged our harps upon the willows’ (KJV). The psalm is a song of lament by the Jewish people during their exile in Babylon. By depicting instruments in the tree above Job’s family, Blake suggests that their display of conventional piety—following ‘the letter’—is a form of spiritual exile.

Tellingly, in the final design in Blake’s Job series, the artist depicts Job and his family playing the musical instruments, indicating that they now engage with ‘imagination’, or ‘the spirit’ in Blake’s use of Paul’s phrase. Thus, the series may be understood as a manifesto of Blake’s religious vision of art, encouraging the viewer to encounter the divine in the ‘life’ of imagination.